The Switch, Nintendo’s new portable console, was marketed as a step into the future. Unfortunately, it launched with more hardware issues and irritating design flaws than playable titles.

As such, fans who just plunked down their hard earned cash for the console are already rolling up their sleeves to build solutions to make their shiny new investment work the way it ought to. Here are six DIY hardware hacks that you may want to consider.

The majority of these solutions to common Switch problems require the use of a 3D printer. If you don’t own a machine and don’t want to buy one, there are plenty of 3D-printing services available that will do the job for a small fee. Search around online for options in your area!

One of the biggest complains about the Switch has been its flimsy, poorly-angled kickstand. The consensus is that it sucks. And because the charging port is located on the bottom of the console, it can’t receive power while propped in an upright configuration.

Over on Thingiverse – a site for people to upload plans for 3D prints – there are three different stands that allow for charging, ranging from a pair of lightweight clips to a full-sized dock. (There’s an officially licensed stand from Nintendo, but that’s going to run an extra $24.95.)

The shallow joysticks and lack of a D-pad have also been frustrating for some Switch owners. Make these joystick extenders or this D-pad cover if that’s your gripe. (And these are legitimate gripes, especially for a hyped console where basically everything will cost extra.)

Detached from the main body of the Switch, many players found Nintendo’s pint-sized Joy-Con too small to hold comfortably. MyMiniFactory, another place to find 3D-printable designs, has plans for a more ergonomic add-on for people with adult hands who want to play Zelda without getting carpal tunnel.

Of course, you could also ruin your Switch’s resale value by sawing the grips off the included controller holster and duct taping them to the console itself.

There’s been concern that one of the major gimmicks of the two-in-one console – the Switch’s dock, which lets it seamlessly blend into a home entertainment setup – could end up scratching the screen. Luckily, the DIY fix for that doesn’t require owning a 3D printer. Instead, it involves pantyhose or a hand-made cosy. 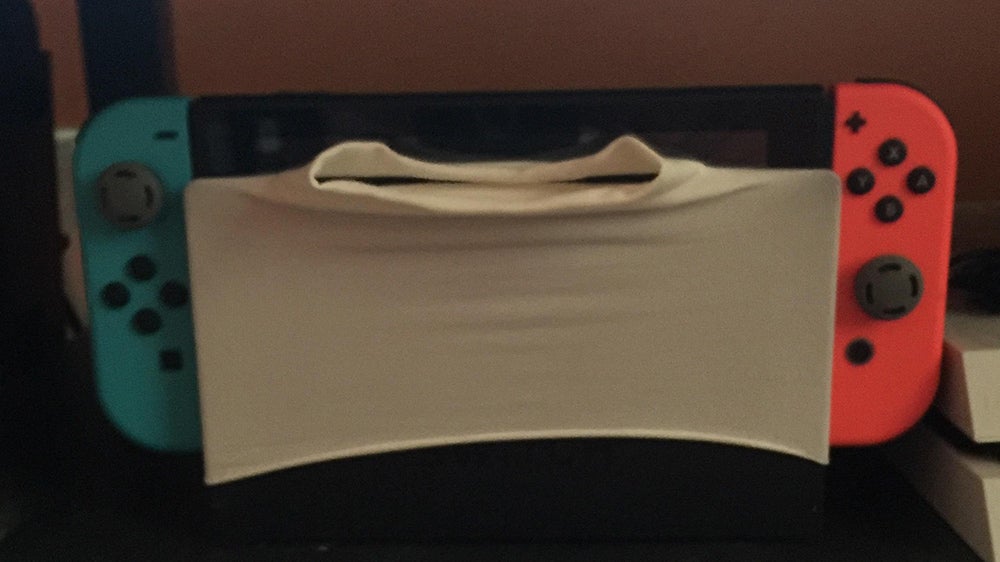 As YouTuber JerryRigEverything shows, the Switch’s screen isn’t made of glass or sapphire like most mobile phones – it’s plastic. Let me repeat that: This $469.95 console, which is intended to be fully portable and withstand the damage of being constantly lugged around, has a plastic-covered screen. Nintendo’s consoles don’t lend themselves to home repairs, and having such a shoddy screen feels like a huge oversight.

Nintendo fans have had so much trouble tracking down a Switch that it should not be surprising how many “replica” Switch 3D printing plans are floating around. At least a non-articulating hunk of plastic does exactly what it’s intended to do and costs a fraction of Nintendo’s asking price.