Last week, we brought you the news about Qantas’ fancy new premium economy seats. The redesigned for the 787 Dreamliner are 10 per cent wider than the existing premium economy cabin on its Boeing 747 and Airbus A380 superjumbo, and also boast a deeper recline. Here are more details.

CEO Alan Joyce say he’s proud of every cabin on the aircraft but believes the new Premium Economy is a quantum leap.

“It’s a design that no other airline has access to,” he told us at a media briefing. “It’s been re-engineered to give our customers more personal space. A more comfortable recline. Better lighting. And storage for mobile devices.”

He says he’s confident the seat will set the gold standard for the industry.

Key features of premium economy on the Qantas Dreamliner:

“Developing a new seat comes with its own set of challenges and opportunities. Working with Thompson and Qantas, I think we’ve created a new standard for Premium Economy,” says Caon.

“We’ve made sure this seat offers genuine comfort through design elements not seen before on aircraft. There are a number of new bespoke design elements that we hope will really set the benchmark for this class.”

Qantas introduced Premium Economy with its A380 aircraft in 2008 and later rolled it out onto the Boeing 747. Qantas will assess updating existing Premium Economy cabins in-line with its fleet planning and product cycles.

The first of eight Dreamliners will be delivered in October this year with Qantas’ first international 787 services in December between Melbourne and Los Angeles.

Flights between Perth and London, which will directly link Australia and Europe for the first time, begin in March 2018. 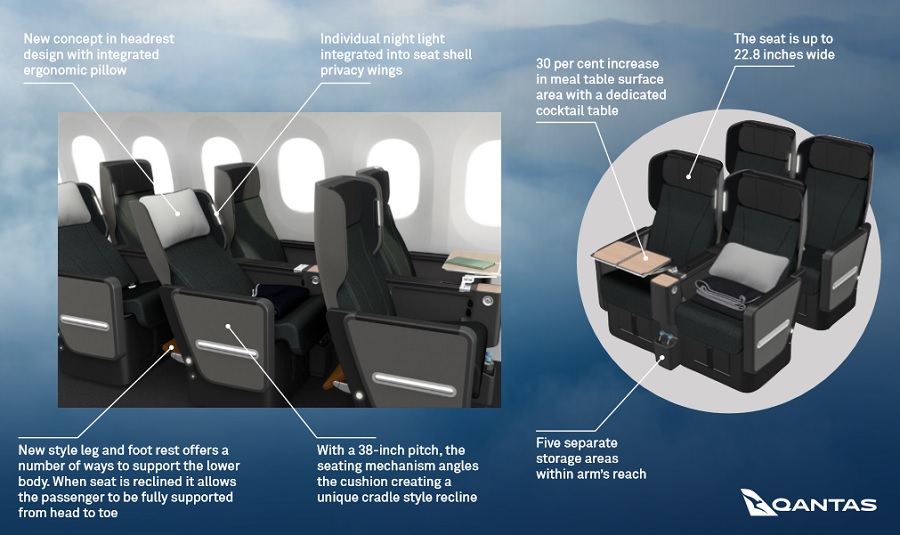