Qantas recently added the Boeing 787-9 Dreamliner to its fleet. The new plane features a revamped economy class seat with a special foot net. We’ve tried it out, and it’s like having an ottoman where you can prop up feet on a long flight.

As much as airlines want to wow us with their shiny new luxury suite or walk up bar, the reality is that most of the flying public will never get a chance to fly at the front of the plane.

While it is rather difficult to really screw up a premium cabin, a poorly executed economy class seat can easily make flying a nightmare.

Which brings us to Qantas. Australia’s national airline is as well known for its impeccable safety record as it is for the globetrotting routes it flies.

In a few hours' time, the first Qantas 787 Dreamliner will make its inaugural flight into Sydney. We were lucky enough to get a sneak peek of the Business, Premium Economy and Economy seats ahead of its maiden voyage. Here are the photos!

In October, Qantas added the first Boeing 787-9 Dreamliner to its fleet. The fleet of eight Dreamliners will be used on various ultra-long-haul routes including the 17-hour-long, 14,400km non-stop flight from Perth, Western Australia to London.

Thus, if you’re one of the 166 people flying in economy on board the Qantas Dreamliner, you better hope they did a good job.

The Qantas Dreamliner economy cabin is brand new. The airline decided to carry fewer passengers in a bid to offer better overall comfort.

But the real gamechanger here is the addition of a foot net. It’s a spring-loaded black net located at the base of the seat in front of you. Simply place your feet inside the net and recline. The effect is similar to that of an ottoman. Thus, you can actually prop your feet up and relax in coach! 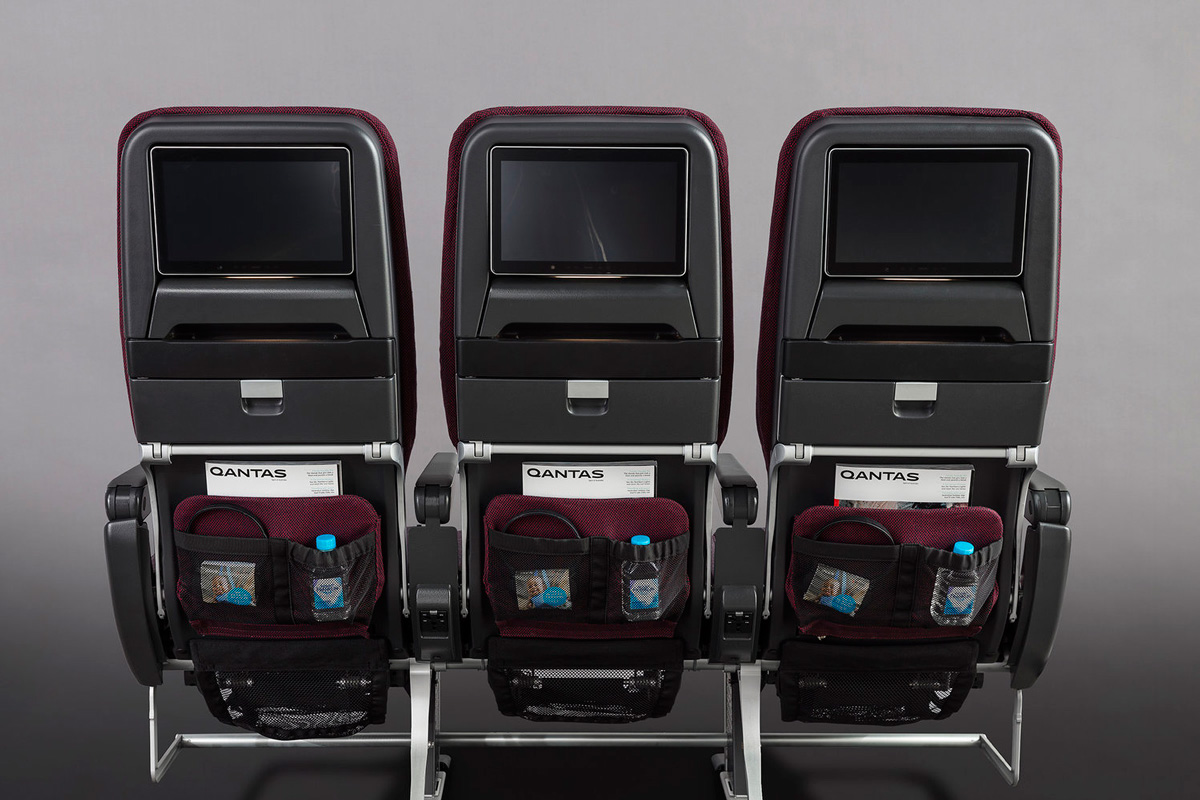 Qantas isn’t the first airline to offer a footrest type device for its economy class passengers. Turkish Airlines and ANA, for example, have had it for years. But the Qantas seat is a marked improvement over the traditional footrest which supports only your feet. The foot net actually cradles both your feet and calves, offering more overall support.

I had the chance to briefly experience the seat in October on a flight from Seattle, Washington to Honolulu, Hawaii. And I can confirm that the foot net along with supple seat padding and a generous degree of recline makes it more than pleasant enough for a 17-hour journey.

The idea of the foot net has been around many years, the seat’s designer, David Caon told Business Insider. In fact, Caon and Qantas CEO Alan Joyce confirmed that it was something the airline wanted for the A380 fleet that entered service in 2008.

Unfortunately, the bulky electronics stored under seat made the idea unfeasible for the A380, Caon said.

Caon used a Featherlite seat from famed German manufacturer Recaro as the basis for the Qantas unit and adapted it for ultra-long-haul travel.

In addition to the foot net, the industrial designer added bespoke fabrics, mood lighting, and a special tray to hold tablets.

Thus far, the new Qantas economy class seat is available on board the airline’s fleet of Boeing 787-9. Although, it is likely Qantas could retrofit other aircraft in the future.