How To Use Tabletop Games To Become A Better Writer

Not every game is about winning. Amidst the rise in tabletop gaming, dozens of storytelling games have emerged that challenge you or your teammates to create entertaining stories instead of beating each other. If you want to hone your skills as a creative writer, these are an excellent way to start.

Storytelling Games Are About Creativity, Not Competition

First, let’s explain the difference between traditional tabletop games and storytelling ones. In games like Settlers of Catan, players use strategy and some luck to win. In storytelling games, players think creatively, use their imaginations and entertain everyone else at the table. By their nature, these games aren’t strictly defined, but they usually have a few key characteristics:

Even if you’ve never heard of storytelling tabletop games or played massive worldbuilding RPGs like Dungeons & Dragons, you’ve probably played some kind of storytelling game. Arguably, the popular Cards Against Humanity is a very basic storytelling game. The black cards are writing prompts and you have to tell the best story with the white cards you’re dealt. If you’ve played it more than once, you’ve probably picked up on the fact that catering your story to the person reading it is a better strategy than always going for the obvious answers. You can also get a very different experience when playing with new people. Of course, no one really pays attention to who’s “winning”, either. You just count up cards at the end and have a laugh about who got the most. This all makes CAH an excellent intro to how storytelling games work. Don’t worry about winning, tell the best story and lean on the creativity of your other players.

How You Can Use Storytelling Games To Improve Your Writing 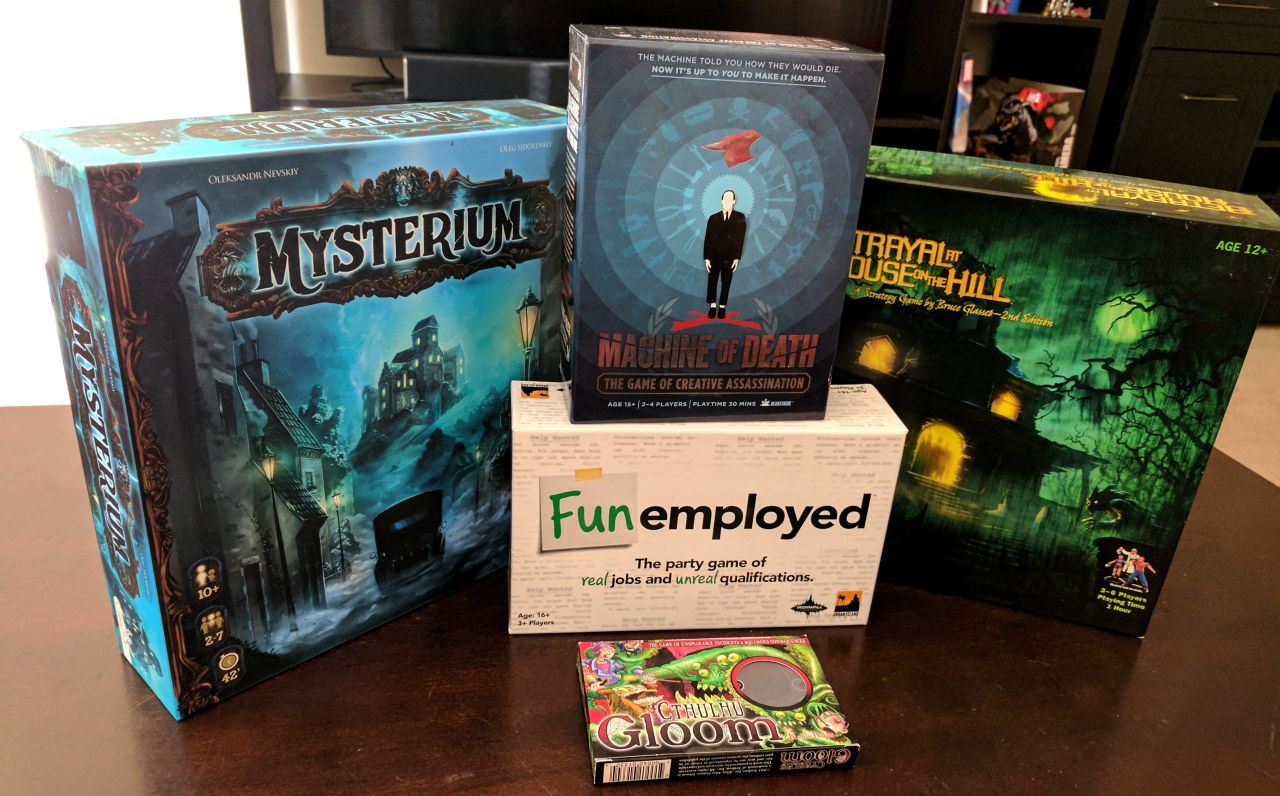 Nothing’s worse for writing than a blank page. Whether you’re writing a novel, a short story or a parody Twitter account, having restrictions and guidelines gives you a starting place so you’re not stuck trying to create something from nothing. It seems counterintuitive, but having limits can make you more creative. Personally, I’ve used tabletop games in a few different ways to encourage more creative writing:

Creativity and inspiration aren’t exact sciences, so do whatever helps you come up with ideas or write stories. While you’re playing keep in mind how you can use what you’re doing to improve your stories later on. Make notes and, when you’re done playing, follow up. Games are fun, but remember you’re also trying to practise your craft here.

The Best Storytelling Games to Kickstart Your Creativity

There are a ton of different games out there that can challenge your creativity in different ways. The following list is by no means complete, but if you’re looking for a kick in the right direction, these can get you started. We’ll also note how difficult it is to get into the game, how many people you can play with and what type of creative muscles it helps exercise.

Betrayal at House on the Hill 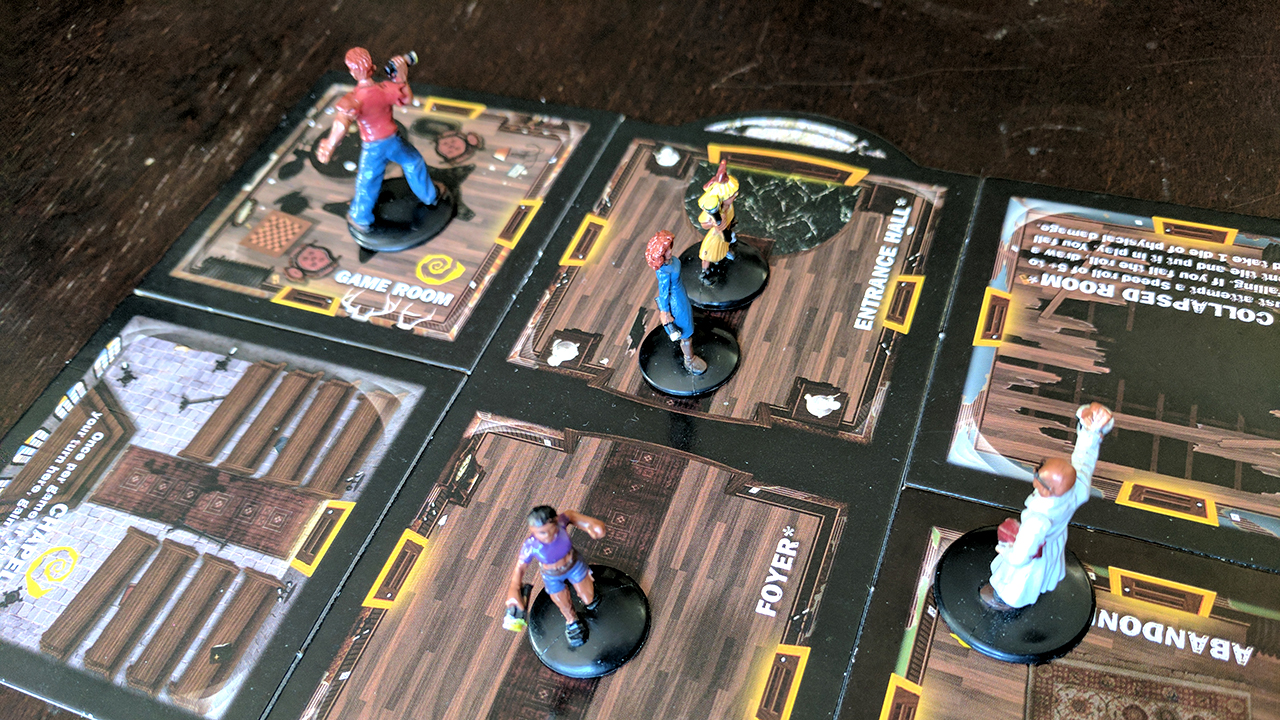 You think you’d do better surviving in a horror movie? Let’s see you do it.

You think you’d do better surviving in a horror movie? Let’s see you do it.

If you’ve ever seen Cabin in the Woods, Betrayal should look familiar. In it, players cooperatively explore a creepy old mansion. Depending on a combination of the items they discover and the luck of a few dice rolls, they will trigger a different horror story. At this point, one player becomes the “traitor” and works against the remaining players.

While this game involves very little storytelling directly, it’s an excellent writing prompt. You can choose different characters to play with, and you’ll get a different story each time. Sometimes you’re fighting a giant snake, a horde of zombies or a Clue-style murder mystery. There are 50 different “haunts” (and 50 more if you get the new expansion). Try playing the game and then writing the story your characters experience down. Make notes while you play about how you overcome challenges. This is especially helpful if you have some really close calls. A tense dice roll can become a scary confrontation with a monster. Treat the game you play like it’s an outline for the story you write and fill in the details later. 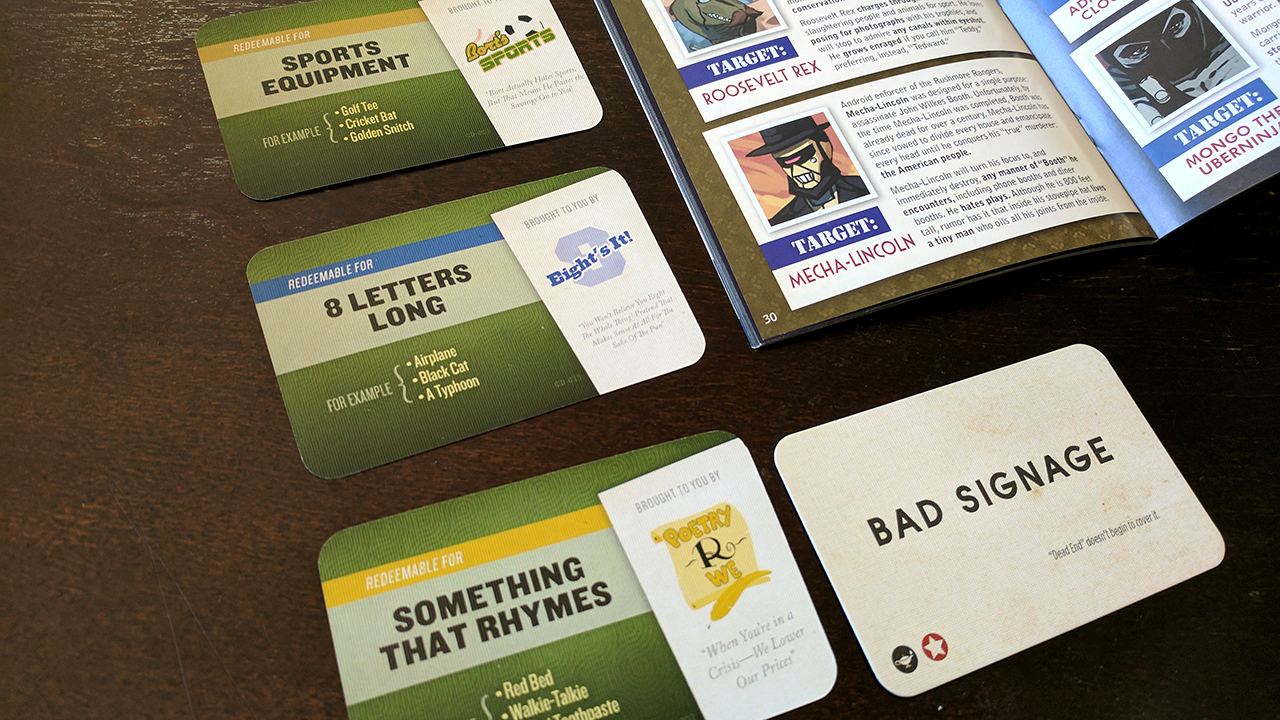 Your mission, should you choose to accept it, is to assassinate Mecha-Lincoln. With bad signage. Good luck.

Your mission, should you choose to accept it, is to assassinate Mecha-Lincoln. With bad signage. Good luck.

This game is based on the compilation book of the same name (which you can read for free in PDF form here). All the stories have a shared premise: A machine has been invented that predicts with 100 per cent accuracy how you will die, but not when. The predictions are vague and sometimes ironically phrased, but they’re always right. In the game, you play as an assassin living in that world. To kill your victims, you must create a story that fits their death prediction. You might even have to get extra creative if they also know how they’re going to die. You’re also given item cards with things like “Something from the ’90s” or “Things with teeth” that you have to use to perform your kill. Your plans either succeed or fail based on dice rolls.

This game requires a lot of out-of-the-box thinking. It gives you just enough of a framework to get started, but it leaves much to your imagination. It’s like storytelling MacGuyver. With a paper clip, a rubber band and an old shoe, can you create a coherent story? You might not want to write down every single game you play, but it’s excellent practise for stretching your creative legs. 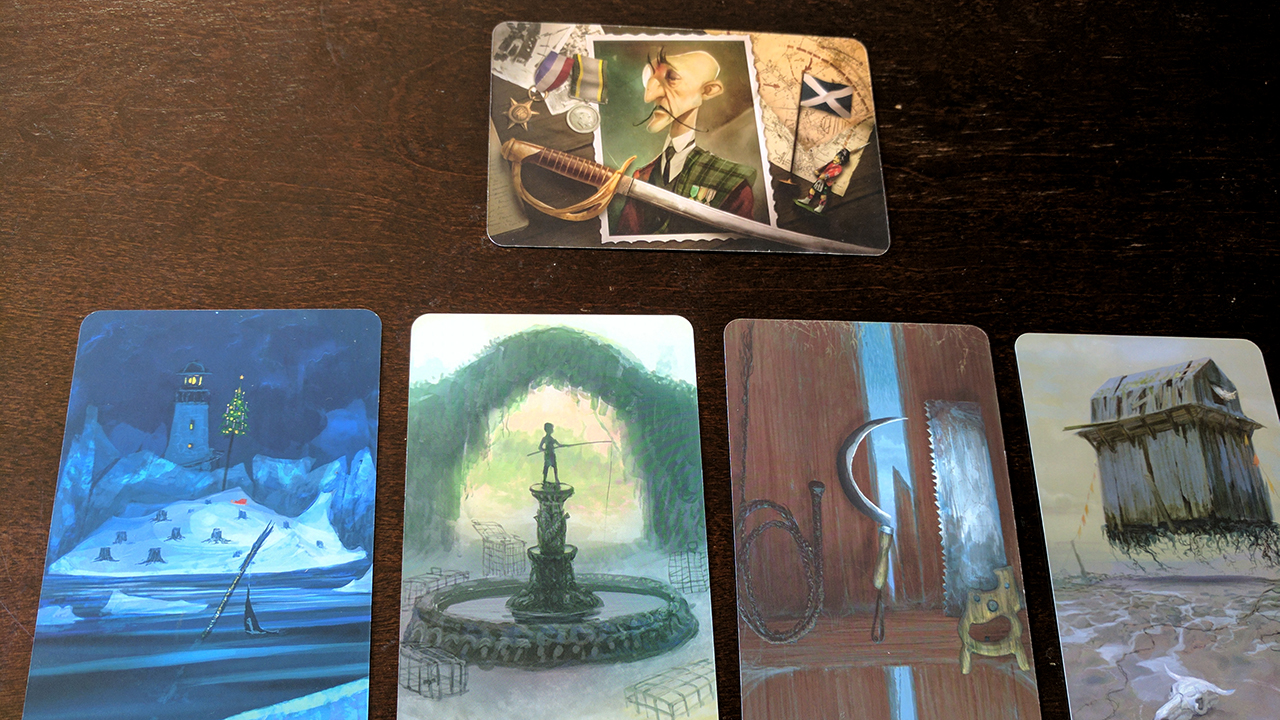 Armed with just these four cards, you need to describe the man above. You can’t speak, because you’re a ghost.

Armed with just these four cards, you need to describe the man above. You can’t speak, because you’re a ghost.

In Mysterium, one player is a ghost that’s recently been killed. The other players are investigating the murder — man lots of these games involve murder, huh? — and have several suspects that could’ve done it. The ghost is trying to give them clues about the people, places and weapons that were used to kill them. The catch? They can only communicate with vague, impressionistic cards.

For writers, this is a particularly fun challenge because it forces you to communicate with things besides words. Sometimes the ghost may be trying to point out colours, shapes or other characteristics about the cards. When you can’t use words to say what you want, you have to think about the other details of a story. This is an excellent way to get in the mindspace to interpret non-verbal details. The better the mental picture you can conjure, the more clear you can write when you’re ready to put pen to paper. 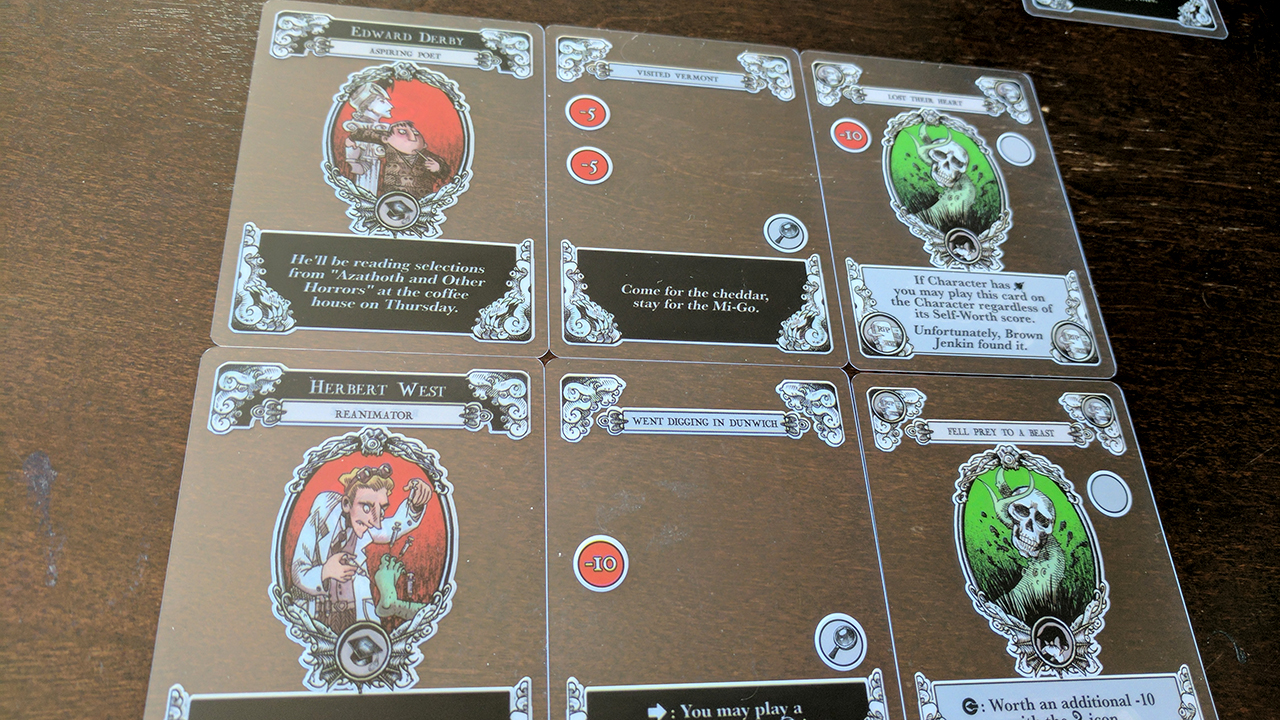 Poor Herbert West went digging in Dunwich and fell prey to a beast. At least he didn’t have it as bad as Edward Derby.

Poor Herbert West went digging in Dunwich and fell prey to a beast. At least he didn’t have it as bad as Edward Derby.

In Gloom, each player controls a different despondent family. Their ultimate goal in life? They all want to die in the saddest state possible in a very Series of Unfortunate Events-esque way. Players take turns playing event cards on their own or other player’s family members to build their miserable story. Cards include such miserable and loathsome events as “Hunted by Hounds” or “Visited Vermont”. The player who has the saddest story when all their family members are dearly departed wins.

Like Betrayal, this game provides an excellent writing prompt, both during the game and after. The event cards have a few details, but you can embellish the story as you play. Each new card is another chance to tell a delightfully dreary story. When you’re done, you can take the stacks of cards on each character and use them as notes to write a more detailed narrative later on, if you so choose. 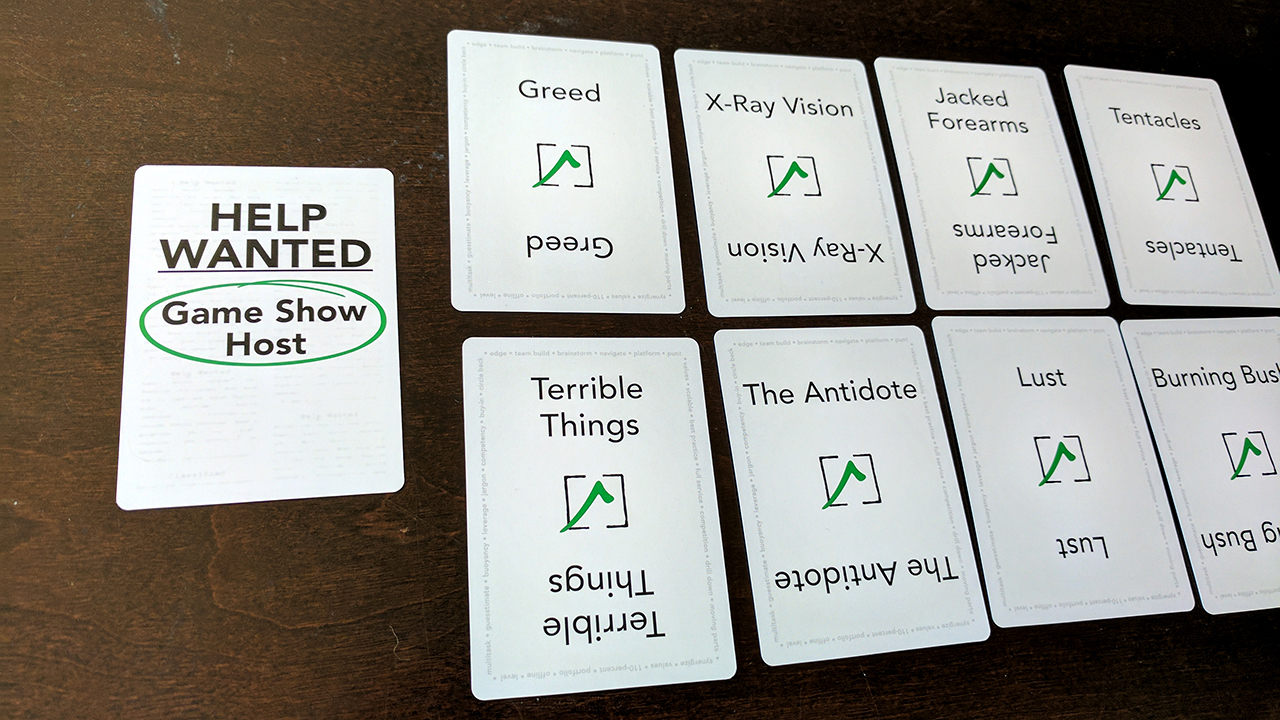 The only game on this list that’s not about death and it’s about job hunting. Have fun!

The only game on this list that’s not about death and it’s about job hunting. Have fun!

One of the few games on this list that doesn’t involve murder, Funemployed is structurally similar to Cards Against Humanity. Each round, a player is applying for a “job opening”. One player reads the listing such as “Drill Sergeant” or “Secret Agent”. The rest of the players must put together an interview pitch to get the job based on the cards the cards they have been dealt that can include things like “Cold Black Heart”, “Survival Skills” or “Communes With Fish”. Which, coincidentally, was Jason Mamoa’s actual resumé for Aquaman.

The stories you tell in this game aren’t all that elaborate, but I’ve found it’s much better for playing around with character creation. Of course many of the combinations are silly, but the cards can give you ideas for different traits to put together in the same person. Having to weave them all together into a single job interview pitch is a good way to practise blending disparate traits into a character over a longer story. Even if you don’t play the game, taking out the cards and picking some at random to write together is a handy tool.

You’re also not limited to games that are explicitly designed to tell stories. Anything that gets you ruminating about characters or storylines counts. If you want to write Les Mis-style fanfiction about meeples in Carcassone, or turn your Risk game into a Game of Thrones-type story of power, go for it. Whatever you choose, playing a game is probably going to be more productive than staring at a blank page.