Role-Playing Games For People Who Don’t Like Dungeons & Dragons 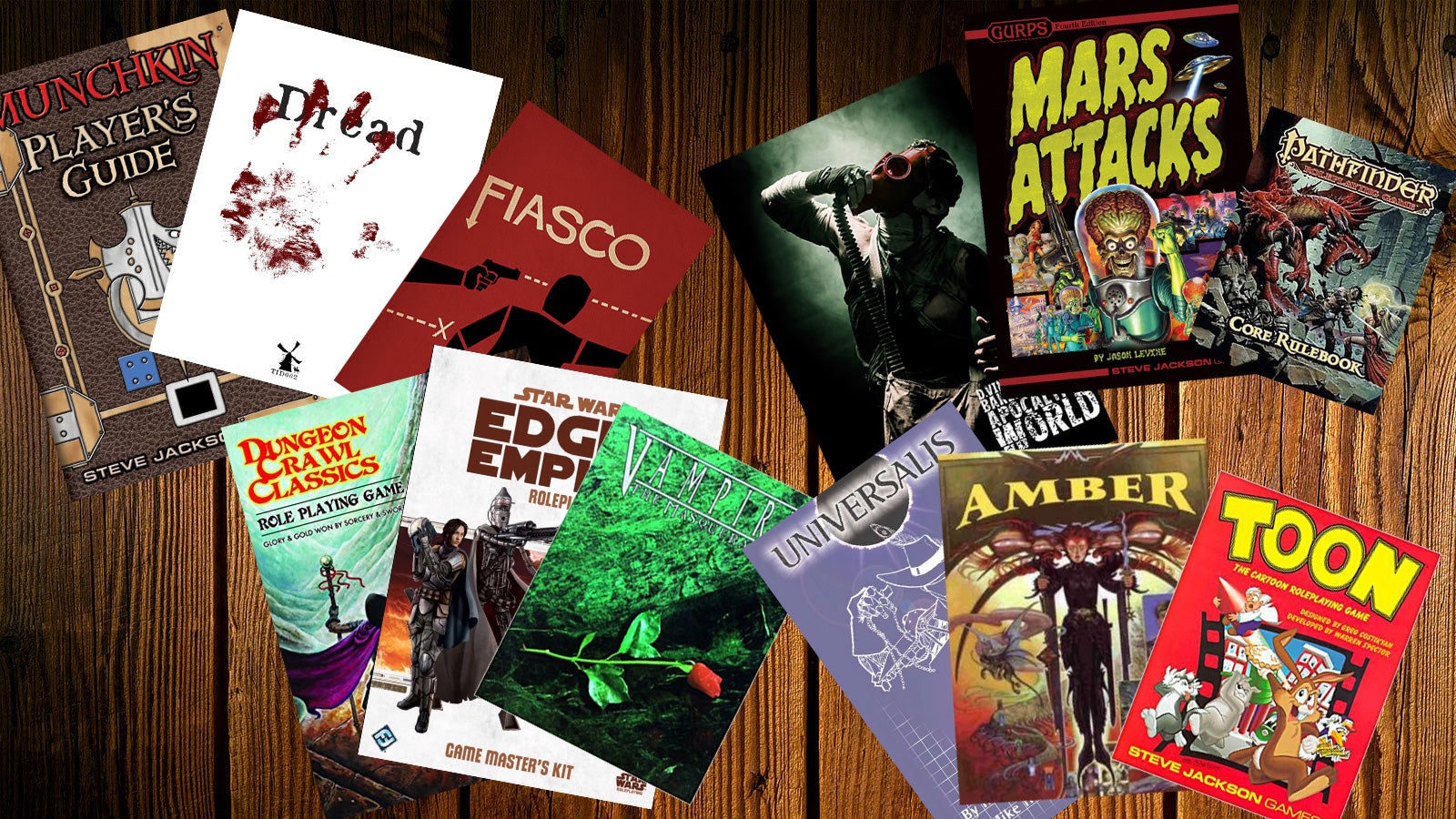 If you ever tried to get into tabletop role-playing games – the kind where you sit around with character sheets, describing your actions and rolling dice – it was probably through Dungeons & Dragons. And if you’re sick of medieval fantasy, or you don’t care about fighting monsters, or you hate looking up stats on different charts, you might have walked away thinking “I guess I don’t like RPGs.” Which is a shame, because there are thousands of other RPGs out there.

D&amp;D is the oldest RPG, and over the decades its evolved into several editions, with a variety of complexity, settings, and character options. But they’re all related to the core concept of playing elves and dwarves that fight fantasy monsters, in a vaguely Middle Earthy setting. So if that whole vibe isn’t working for you, here’s a guide to searching for something better.

There’s no reason that a game has to be medieval-flavored. There are RPGs in every genre and setting: cyberpunk, post-apocalypse, kids’ cartoon, espionage, vampire, superhero, 18th century gothic romance, even religious wars in pre-statehood Utah. You can play the minions of a vampire or mad scientist, or an intentionally overpowered adventurer. (If you want to be a modern-day magician, I recommend Mage: The Awakening or its predecessor Mage: The Ascension). Wikipedia has a long, but far from complete, list of games by genre.

Different editions of D&amp;D You can easily tweak the setting or characters in D&amp;D; different versions of D&amp;D, as well as loads of supplemental materials even

Just like D&amp;D was inspired by Lord of the Rings and Conan the Barbarian, some of the most popular RPGs are inspired by famous genre fiction. Call of Cthulhu uses the “Cthulhu mythos” developed by HP Lovecraft and other horror writers, but you can set it in any time period and any place on Earth (or even off Earth). Mouse Guard was inspired by Brian Jacques’s Redwall books.

Some systems aren’t even built for a specific setting or story. The Generic Universal Role Playing System — GURPS — builds interlocking sets of rules for everything you can think of, including some specific fictional worlds like Mars Attacks and Terry Pratchett’s Discworld.

Every game works a little differently, or a lot differently. In D&amp;D, wizards learn specific spells independently of each other, like they’re collectible cards. In the Mage games, a character’s magical ability is more holistically determined by their skill in “arcana” like temporal magic, necromancy, and mind control.

If you just want a version of D&amp;D that’s less complicated, you have tons of options. Two of my favourites are Dungeon Crawl Classics and Dungeon World, and they’re roughly opposites. Of the three major paradigms of role-playing games – drama, simulation, and game – DCC focuses on game, Dungeon World on drama.

DCC runs on an old-school system of rules, stats, and randomised events, so you can have fun one-session adventures. You don’t want to build friendships with non-player characters, you want to kill them and take their loot. You know barely anything about the monsters that surround you, but you know your new enchanted axe does extra damage to the undead. DCC’s creators publish lots of modules, so your dungeon master doesn’t have to make their own story if they don’t want to. DCC also uses even weirder dice than D&amp;D, like dice with 7 or 30 sides.

Dungeon World focuses on character relationships and storytelling – you get points for fulfilling a “bond” with another player – for satisfying long-term narratives. You can make choices based on the most interesting story, rather than maxing out your stats. Your dungeon master is encouraged to make most details up as they go along, which saves them prep time and lets the players help create the world. There’s less arithmetic, but some more abstract concepts to keep in mind.

You can get a lot weirder, and throw out the dice entirely. In the trippy, multi-dimensional fantasy game Amber, if two characters come into conflict, there’s no dice roll, no randomization at all: If two characters are wrestling, the stronger one wins, unless a character can pull out some other item or ability that gives them the upper hand.

The horror game Dread is run with a Jenga tower. Every time you try to do something you could fail at, you have to make a Jenga move. When the tower falls, you die.

For minimalist games with fewer rules, try this list on RPG Geek, which includes several games with only one page of rules. For a minimalist version of D&amp;D, try the Tiny Dungeon Roleplaying Game Handbook. Players don’t level up, and all dice rolls use a couple of regular six-sided dice.

If you’re already familiar with a few systems, but you want to find a simpler — or more complicated — one, read Rolfe Bergstrom’s list of games ranked by complexity, or Lunatyk’s follow-up with more games. If you’re familiar with all the gaming tropes and you want a system that leaves you tons of room to handwave or improvise, try the intentionally incomplete World of Dungeons (here’s a collaborative rulebook on Google docs).

For all the variety of RPGs, most of them are engineered for fighting. But a few games avoid this cliché. In the acclaimed Japanese import Golden Sky Stories, recommended for kids 10 and up, you play a magic animal that helps people and makes friends. ^-^ A play session lasts just an hour or two.

You could also try The Cloud Dungeon and ExSpelled, two cute adventure games played through imagination and papercraft. The first is a family-friendly fairy tale; the second is an affectionate Harry Potter parody set at a community college for mediocre wizards.

For more games, check out the “Non-video game examples” section of this TV Tropes page.

Most RPGs require a dungeon master, to build and narrate the world around the players. But maybe no one in your group wants to spend hours prepping your sessions and studying the rules.

DM-less games often feel more like collaborative storytelling. Universalis, for example, has players bid for character attributes using coins, then trading those coins to take actions, to change the rules, or to take control of each other’s characters. The system is meant to work with any genre or setting.

Fiasco tells a much more specific story: a caper that feels like a Coen Brothers movie or a Jane the Virgin plot, set in locations like the suburbs or an Antarctic outpost. The game plays out in one sitting, and it’s a lot like a board game with no pieces and no board. You and your fellow players are all tangled in a web of intrigue with each other. You win by developing twists and turns in your story, so bungling a heist and getting murdered by your secret twin brother can be a victory. You do roll dice, but just the regular kind.

Also try Board Game Geek’s forum discussion of DM-less dungeon crawls, and blogger Doubleninja’s list of over 200 GM-less games in all genres.

Experienced gamers will know we’ve just barely gotten started, so check the comments below for more suggestions, stories, and gracious corrections of our gross mischaracterizations.