How To Watch November’s Biggest Supermoons And Meteor Showers

November is set to be a stellar month for skywatchers, bringing not only the largest supermoon this century, but also a handful of meteor showers and interesting astronomical events. Not only that, November offers warmer weather and overall nicer viewing conditions, making it easier to justify staying out into the early hours of the morning.

The full moon on November 15 will be one of the largest, brightest moons we’ve seen since 1948, thanks to the moon’s elliptical orbit bringing it closer to the Earth. This is officially called the perigee, but you might have heard it more commonly referred to as a ‘super moon’. With this moon being especially large, it’s even been called an ‘extra-super moon’, or ‘super-duper moon’.

No matter what you call it, the super moon is going to be one of the most obvious, and easy to watch, astronomical events of the month. All you really have to do to see it is to look up, given clear skies on the night of the 15th. Of course, with a bit more preparation you could also set up a telescope for more detailed viewing, or find somewhere to photograph the super moon. If you’re after a great photo, set yourself up with a vantage point to the east.

If you don’t want to go outside, Slooh will be livestreaming the November moon with a discussion of the phenomenon, as well as the culture surrounding this particular full moon.

The moon is making a few more interesting showings this month, with various ‘lunar couplings’ making for great stargazing. The main one of these involves a triangle comprised of Venus, Saturn and the moon, with this formation hanging around early in the month. At this point it’s unfortunately already passed, but you can still catch Venus climbing higher in the sky where it will enter the ‘teapot’ of the constellation Sagittarius on November 9.

You can still catch another lunar coupling coming up, however. On the 9th, Mars will be at its closest to the waxing crescent moon, forming a nice picture for stargazers or astro photographers. You’ll also be able to spot Jupiter again, after a long stretch where the planet was too close to the sun to be seen. If you’re up early in the morning (or still up from the night before), look to the eastern horizon in the dawn sky.

November brings three notable meteor showers to our skies: the Southern Taurids, the Northern Taurids and the Leonids. 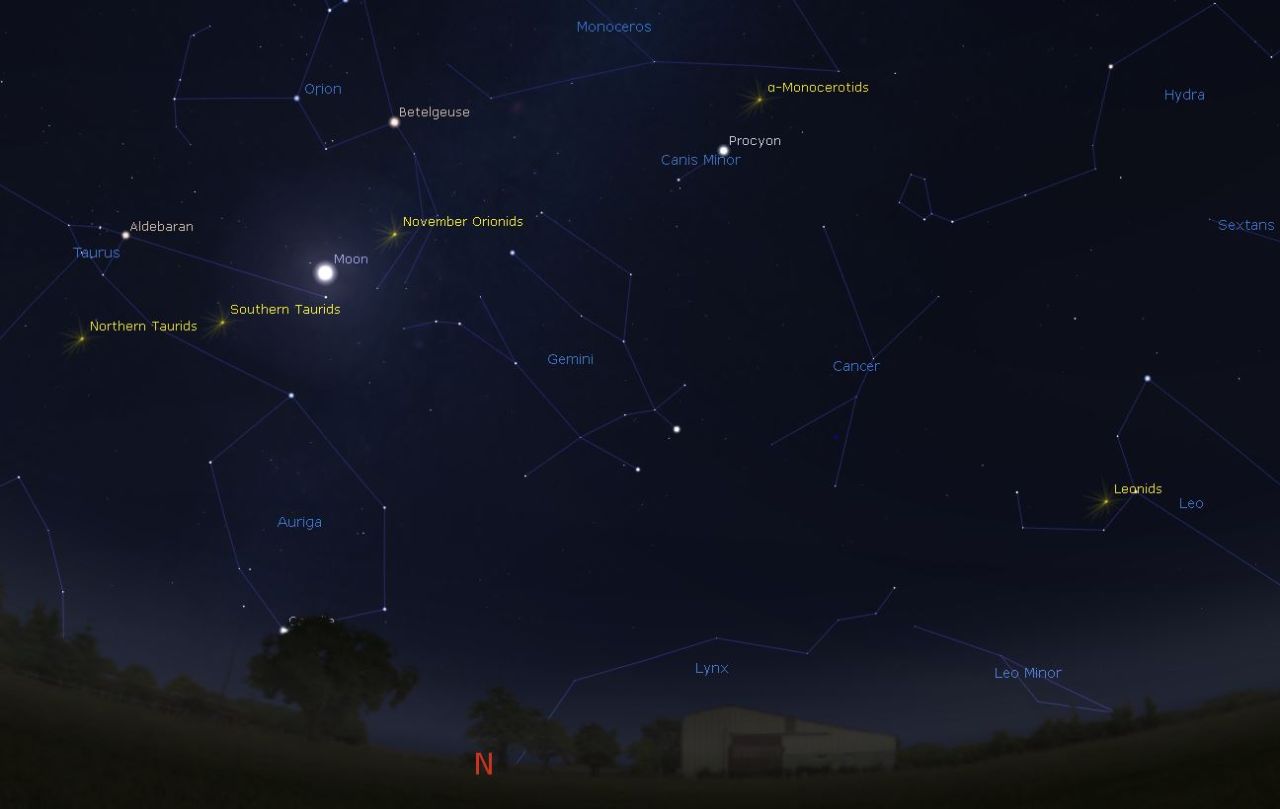 All active meteor showers on the night of the Leonids’ peak. Image: Stellarium

Both of the Taurid showers are active for a long period — in fact you may have seen them mentioned in the Orionids guide from October. The Taurids come from the comet Encke, and are split into two different segments — the Northern and Southern Taurids. The radiants of the two segments are slightly separated within the constellation of Taurus, which gives the meteors their name.

The Taurids aren’t quite as active as some showers, with only around 6-7 meteors an hour at the peak. However the Taurids are known for producing fireballs, so if you do have the patience it can be a great shower. While the Taurids are less prolific, they also tend to be slower and brighter in the sky. 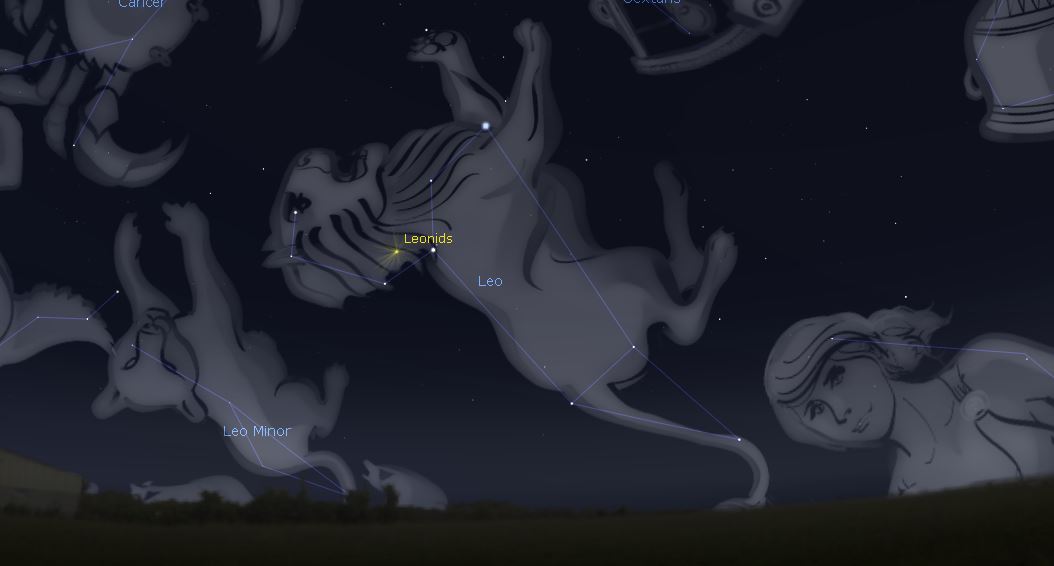 The location of the radiant within Leo from Sydney, 4am AEST on November 17. Image: Stellarium

The Leonids are also active during November, peaking on the 18th. Again the proximity to the super moon is problematic, but there should be plenty to see for the intrepid skywatcher. You can expect on average one meteor every 10 minutes from the Leonids this year, and you may even see some strays from the Taurids as well if you’re setting up to watch.

Coming from the comet Tempel-Tuttle, the Leonids appear to radiate from the constellation Leo, earning them their name. As with many meteor showers, the best views are to be had in the very early morning, between 3 and 4am.

To find the Leonids radiant, look to the north-eastern sky. Not too far above the horizon, look for the bright star Regulus, the ‘heart’ of Leo’s lion. The radiant is slightly below this and a little further to the north, sitting around the lion’s ‘mane’. Of course the meteors in the shower streak away from this point, so once you’ve found it you’ll still have to scan the sky.

Time and Date has a table updated daily showing the azimuth and altitude of the radiant for a number of Australian locations. It’ll also estimate your best chance of viewing the Leonids from your location, and when you should view them.

As always, if you can’t get outside or are unable to find a good vantage point, you can watch the Leonids Meteor Shower live via Slooh’s video stream, kicking off on Friday November 18, 11am AEDT.