Geminid Meteor Shower: How To Watch In Australia [Updated]

Tonight’s Geminid meteor shower will be visible from every country on earth. However, the impressiveness of the celestial display depends on a range of factors, including time, viewing strategies and location. Here are some tips for watching the Geminid Meteor Shower in Australia.

Update: The shower hit its peak early this morning, but there’s still one last chance to catch this amazing sky show in Australia. Here are the dates and times you need to know about.

What are Geminid meteors?

The Geminid meteor shower is an annual end-of-year sky show where you can see over 100 meteors per hour. They’re the remnants of an extinct comet known as 3200 Phaethon.

During its erratic orbit, dust and debris enters and burns up in the Earth’s atmosphere which creates the bright showers visible from Earth. The view is particularly good from the southern hemisphere, which makes it a favourite event for Australia’s stargazing community.

How many meteors will I see?

This year’s event is expected to produce up to 41 meteors per hour although the number decreases to around 14 depending on where you are situated. Basically, the further north you are in Australia, the more you’ll see.

The best locations in Australia are on the same latitude as Darwin followed by Brisbane/Perth. Sydney, Adelaide, Canberra and Melbourne should still receive around 22 meteors per hour (weather permitting) which isn’t bad.

The good news is that the shower coincides with a new moon, which makes things nice and dark during the shower’s peak for optimum viewing with the naked eye.

What time is the Geminid Meteor Shower?

The Geminid Meteor Shower occurs between December 13–16 each year. It is set to peak in Australia early Thursday morning (December 14) between 3:30am and 4:00am (AEDT).

Look Up: Your Guide To Some Of The Best Meteor Showers For 2017

After a disappointing 2016, when most of the annual major meteor showers were washed out by moonlight, 2017 looks far more promising.

Obviously, the time to head outside depends on the state or territory you reside in. To save you the trouble of AEDT calculations, here’s a complete timetable:

The wags among you will say “just go outside and look up”. There’s actually bit more to it than that. The meteors appear to radiate from the constellation of Gemini (hence the name).

In other words, you should be looking toward the north sky. If you don’t know your star constellations and are terrible at natural navigation, we suggest bringing a compass along. 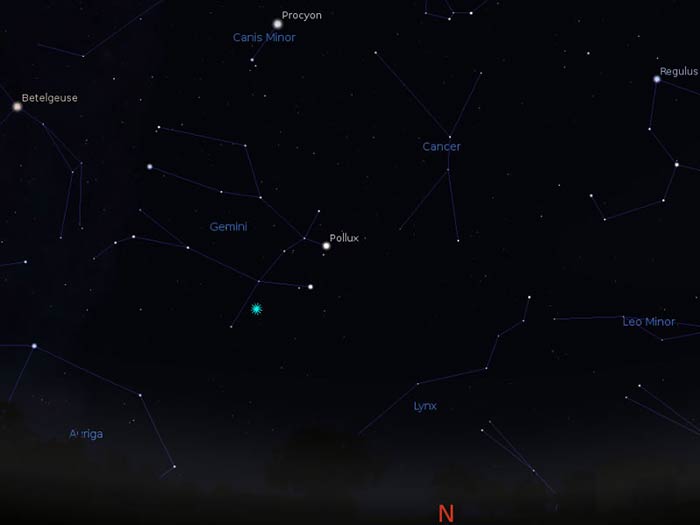 In the image above, the blue burst shows where the Geminid meteor shower will appear for Sydney at 3am AEDT.

Instead of fixating on a single portion of the night’s sky, seasoned stargazers recommend flicking your eyes from side to side. Patience and vigilance are also important – meteors do not pass at regular intervals, regardless of the per-hour average in your area. (i.e. – You might see nothing for ages and then a bunch at the same time.)

Naturally, it’s also important to avoid artificial lights is possible. And yes, this includes your smartphone – catching up on Facebook between meteors will severely hamper your night vision so leave those electronic screens at home.

While it’s possible to enjoy the show in nothing but your pyjamas (or in the nuddy if you’re that way inclined), coming equipped with some extra gear will enhance the experience. At the very least, you should bring along a recliner to sit in or a blanket to lie on. In addition to keeping you nice and comfy, this allows you to keep staring skyward without getting a kink in your neck.

If you’re planning on photographing the shower, try and find a place with minimal light pollution; preferably with a high vantage point and a good view of the north. Here are some photography tips from our previous guide:

Astrophotographer David Finlay recommends setting up with a tripod and cable release, and using the following settings for an optimal picture manual setting, 30 second exposure, f2.8 or lower (or as low as you can go), ISO1600-3200, white balance 4,200K.

If you’ve got a big memory card, you can also lock the cable release button down and take a series of continuous photos. This way you’re more likely to catch fleeting meteor trails, but you can also combine any photos into a great time lapse. To avoid a boring photo, he also suggests making sure something of interest is in the foreground so your photo isn’t just plain sky.