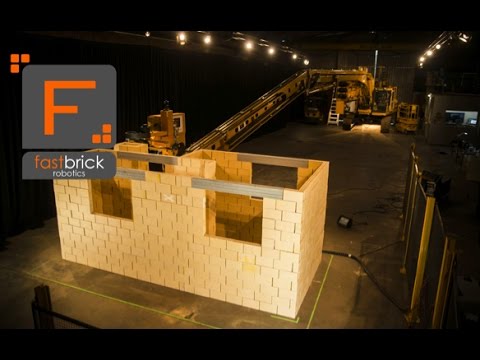 Last year, CEDA cautioned that almost five million Aussie jobs face a high probability of being replaced by robots in the next two decades . Furthermore, an additional 18.4 per cent of the workforce has a “medium probability” of their jobs being eliminated. In other words, Australia’s future workforce is going to feature a lot more machines at the expense of human employees. (Read the report here.)

These job losses due to computerisation and automation are expected to affect some industries more than others. Construction workers are among the most vulnerable, with some reports putting the probability of job loss at as high as 90 per cent. When put into this context, the time lapse video above could be viewed as an ominous harbinger to those at risk.

Yesterday, Perth-based company Fastbrick Robotics unveiled its prototype bricklaying machine dubbed the Hadrian 105 (presumably after the Roman Emperor who reconstructed the Pantheon, built the Temple of Venus and Roma and erected Hadrian’s Wall.) Attached to the back of a truck, the robot has been designed to deliver fully automated, end-to-end 3D printing brick construction.

It can build a house with the precision of a highly trained human, including all the necessary cutting and placement or materials. What’s more, it has a bricklaying rate of 225 per hour, which is four times faster than a human. (If that doesn’t impress you, there’s another prototype in the works called ‘Hadrian X’ that will be capable of laying an astonishing 1000 bricks per hour.)

The Fastbrick Hadrian 105 uses a laser guidance system that is accurate to 0.5mm. In the supplied video the machine is using an adhesive glue rather than mortar which explains the absence of overspill. An add-on for the Solidworks CAD program should also enable architects to produce machine code for each brick’s position from any house’s 3D model, making the programming process even more hands-off.

The Hadrian X prototype is around a year away from hitting the market in Australia. These developments can only be seen as bad news for brickies and other on-site labourers in Australia. On the other hand, the emergence of technologies like the Fastbrick Hadrian 105 will bring many improvements, including cost efficiency, faster construction rates, higher accuracy, better safety rates and reduced waste.

If you suspect you’re in danger of becoming a casualty to technological progress, you should probably think about branching into another industry sooner rather than later. Click here for some tips on how to protect your career against rapid tech changes.

[Via over at Business Insider]