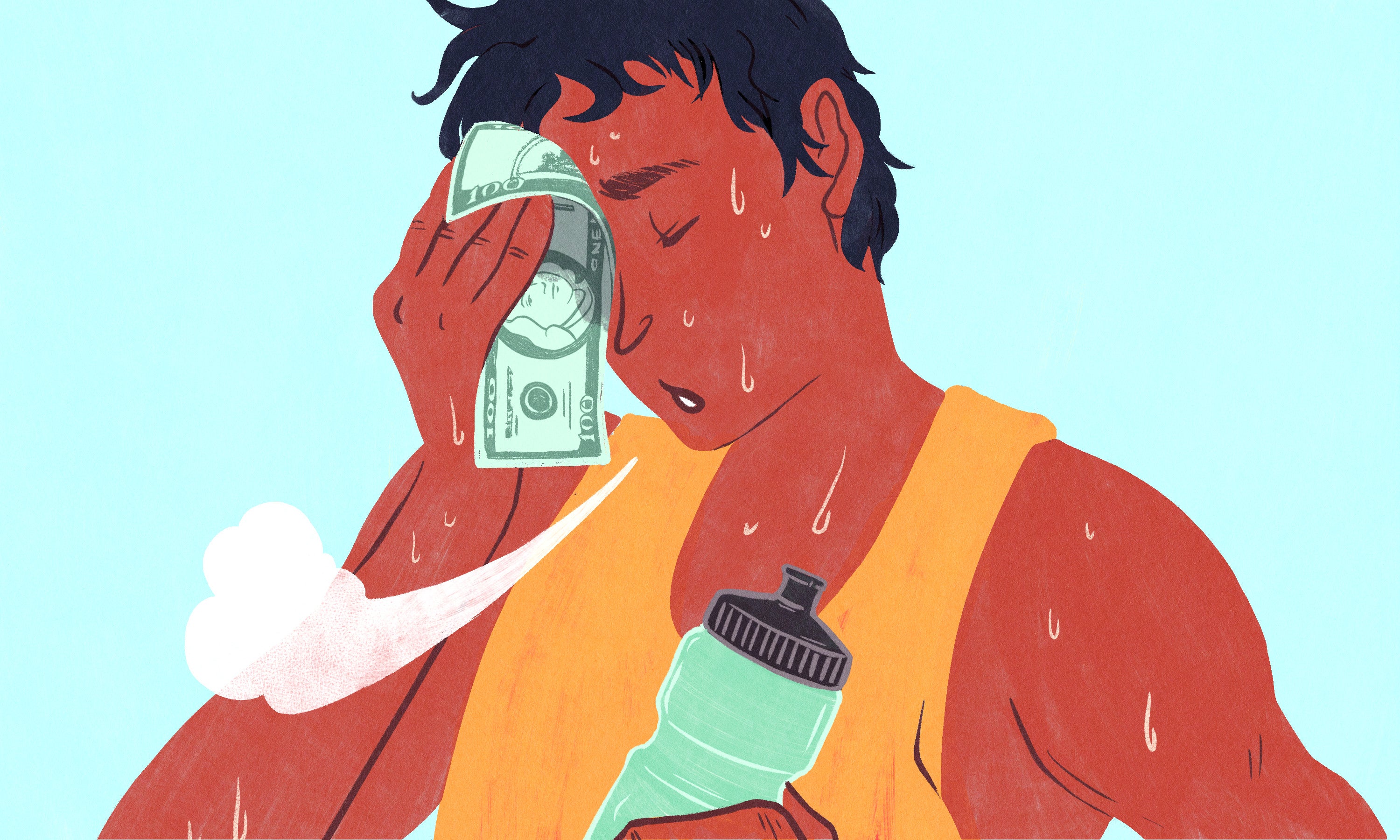 Running is simple: Just lace up some shoes and go, right? We've even told you that you don't need to buy expensive shoes. But even if you seek out the clothes, shoes and races with the lowest price tags, it's hard to keep your overall budget down. Here's why, and what you can do. Illustration by Angelica Alzona.

Saving money on running isn't impossible, but beginner runners should be sceptical of the fiction that running is an almost-free sport. And if you're an experienced runner with a closet full of overpriced clothes and gadgets, know you're not alone.

Shoes Aren't Cheap (Even the Cheap Ones)

Let's take a look at that idea that you can run in cheap shoes. It's true that more money doesn't always buy you a better shoe: Some of the running shoes with the best ratings, according to a study by RunRepeat, had low prices. Cheap, in running shoe terms, means around $80. You can easily pay over $130 for a basic pair.

One problem is that you don't choose shoes with your brain; you choose with your feet. If the $80 shoes don't feel right, or if you get aches and pains after running in them for a while, you'll need to try a new pair. The one that's right for you might end up being a $160 pair. That's especially true if you want or need cushioning or motion-control features. So, go ahead and check out the cheap shoes first, but don't be surprised if you end up needing to spend more than the minimum.

You can't always tell in the store which shoes are the right ones, either. Comfort is a better gauge of a good shoe than how you walk or the height of your arches — but that's comfort as measured after kilometres on the road, not ten paces wandering around the shoe store. I know I'm not the only runner with abandoned shoes in the back of their closet. I've got a Brooks Adrenaline that a running shoe employee told me would be best for the way I run, but every time I used them I got pain in my arches after the first 10 minutes. Then there's the New Balance Minimus that felt great for about two weeks, until I realised I was developing a case of tendonitis. I cured that problem by simply switching back to my old shoes. In total, that's about $230 wasted.

Here's a well kept secret: Many specialty running stores will let you return shoes even if you've been running in them. They will also often let you take a run around the block, or on an in-store treadmill, while you're trying them on. That's a good reason to shop at one of these stores instead of buying online or at a big-box retailer, but that great return policy comes at a price: Shoes in these stores tend to be more expensive than their counterparts elsewhere. On the bright side, once you find a shoe you like, you can scour clearance sales to find it at a discount.

As a runner, you'll get picky about clothes and socks. Athletic companies offer them in technical fabrics that don't mop up sweat, and in designs that minimise uncomfortable rubbing. Sometimes you can pick up the perfect item of clothing cheaply, but that's not a guarantee. The staff of magazine Runner's World once challenged themselves to come up with a budget running outfit from each of several US big-box stores ($US100 [$133] including shoes), and didn't fare well. They found some items they liked, but also a lot that fell apart after a wash or two.

Cheap running clothes are out there, but they have the same problem as all other cheap clothes: They're not necessarily good quality. Even if you're a rebel like me who runs in cotton tank tops, you'll still amass a small wardrobe of clothes that you've set aside for running, and you'll have to replace them frequently as they fall apart.

If you need a sports bra, that's an investment, too. The bra you use for yoga or for gym workouts probably won't cut it, since running is a much bouncier activity. Depending on your body type and your luck with shopping, you may need to spend $70 or more for a bra that does the job (or for a cheap bra plus an add-on compression band). Then, either wash it every day or buy more than one.

Clothing considerations get even more expensive if you get serious enough about running that you do it at night, in the cold or for long distances. When I head out in the wintertime, I wear an $US18 ($24) pair of socks (worth it!), a $70 neon pink running jacket that is waterproof, breathable and visible enough that I won't get run over in the dark (similar to this one) and a $97 wool "base layer" shirt that was an extravagant gift-card splurge but is hands down the best thing I have ever worn in the cold. I also own a pair of water-resistant shoes, to keep the snow out (though that's less of a problem in Australia).

You can save money on this extra gear by shopping for discounts (that base layer is on sale for $46 as I write this), or by layering less-than-perfect garments over each other. A cotton thermal undershirt could do most of the work of the wool base layer, for example, although it wouldn't wick sweat as well.

If you take up marathon training or long distance trail running, you'll need a way to carry snacks and water bottles comfortably. A hydration belt is at least a $55 purchase, and if you don't have one, you'll need to adjust your running route to line up with bubbler locations. Saving that money means trading off your freedom to run where you want.

You can keep costs down by running short distances in nice weather, which reduces the amount and variety of gear you need to buy. You can also look online for discounts on brands of clothing that you know are high quality.

A lot of us focus our training by picking a race, whether that's a marathon next year or a 5K race as our graduation from couch-to-5K training.

It costs money to enter races. For a local 5K, that might be just a $25 fee, which is no big deal if you only race occasionally. But if you try to expand your horizons, you'll need to expand your budget. It now costs a whopping $US255 ($340) to run the New York City marathon — assuming you even manage to get in. Boston, Chicago and Disneyworld marathons go for around $US180 ($240), and it's rare to find a large marathon under $US100 ($133). The Sydney Marathon and Melbourne Marathon both have entry fees of $155.

Race fees have been going up and up in recent years, as running and racing have become more popular. Basically, race organisers have figured out that events can be moneymakers. At the Pittsburgh marathon ($US145 [$193]), runners get a swag bag with just a few items — a whistle and a protein bar were in my relay bag this year — and have to walk through a crowded expo full of vendors to collect them. There's a "free" T-shirt, of course, but it's on the other side of the expo. The organisers seem more interested in getting racers to open their wallets again and again than in making the entry fee seem worth it.

By contrast, I've had great experiences at smaller, local races. Find the right one, and for that $25 (or a little more for longer distances) you can enjoy a fun time, a bountiful post-race buffet and the satisfaction of knowing a good chunk of change went to a charity. Some of these races offer swag bags and free shirts, and others don't. I just got a brochure in the mail yesterday inviting me to enter a local 5K for $16, with shirts available for an extra $8.

If you prefer not to race, then you'll have an even easier time saving money. You can test your fitness whenever you want on the route of your choice. Fire up Strava and run a segment in your area if you enjoy competing against others.

As a runner, you're part of a target market. Lots of companies want your dollars, for everything from bumper stickers to expensively stylish compression socks to certain features of running apps.

Plenty of those products are genuinely useful, too. GPS-enabled watches can be a lot handier than the phone in your pocket, and a good bounce-free pocket (to hold your phone or other essentials) is super useful. But this sport isn't looking so cheap anymore, is it?

There's one more aspect that's harder to put a price on: Injury. Runners get injured incredibly often: A 1992 study in Sports Medicine calculated the risk as a 37 to 56 per cent chance of injury per runner per year. Other studies have come up with different numbers, but all agree that runners are very prone to overuse injuries — like my tendonitis, or other issues that can cause pain in the knees, ankles and hips. You may have to pay for medical care for injuries, or you may end up cancelling plans or missing work to take care of yourself. (A lot of those race fees aren't refundable, by the way).

There's no reason to give up running if you like it. I still run, and love it, but I have a pretty clear understanding at this point of how much it costs. Running is worth it to me. It's also cheaper than a lot of other sports that also require specialised equipment and can set you up for injury. But now that I know better, I will never tell anyone that running is simple or cheap.