Why A Head Injury Can Be Far Worse Than You Realise

Around 432,700 Australians — or 1 in 45 — have suffered an acquired traumatic brain injury in their lives. Some eventually die as a result, and those who do recover often exhibit lingering effects. It’s a serious public health issue that’s only getting worse. Here’s what you need to know about protecting your head.

The human brain is one of the most complex structures known to us. Not surprisingly, it’s also one of the most fragile. Nature has gone to great lengths to protect this vulnerable body part by encasing it in a skull and shielding it with multiple layers of membranes just beneath it to block out harmful compounds.

But there’s only so much that thick skulls and membranes can do in the event of a blunt trauma or sudden jolt. The energy that’s transferred into our cranium can result in physical trauma to the brain and cause it to shift around dangerously.

Today, virtually no one is immune from experiencing a head injury — though risk factors and demographic predispositions do exist. High impact sports and an ageing population have a lot to do with it, but it’s something all of us need to be aware of — especially given its near-epidemic status in our society. We need to start talking about head injuries more often than we do.

Trauma to the Head

Traumatic brain injuries, which are often referred to as concussions, can be caused by a bump, blow, or jolt to the head. It can also happen when an object pierces the skull and enters the brain tissue, but for the purposes of this explainer we’re going to focus on blunt trauma and sudden jerky movements.

These injuries are strong enough to disrupt normal functioning of the brain. Not all hits to the head result in a TBI, but neuroscientists say trauma can even exist at the microscale. Injuries can range from mild (the most common) to severe (which can even result in temporary loss of consciousness or even coma).

Symptoms vary depending on the severity of the injury and the recovery stage. For mild TBA, these can include headaches, confusion, lightheadedness, dizziness, blurred vision or tired eyes, ringing in the ears, bad taste in the mouth, fatigue or lethargy, a change in sleep patterns, and behavioural or mood changes. It can also give rise to problems with with memory, concentration, attention, or thinking.

Moderate and severe TBIs produce these symptoms, too, but also headaches that get worse and don’t go away, repeated vomiting or nausea, convulsions or seizures, an inability to awaken from sleep, dilation of one or both pupils of the eyes, slurred speech, weakness or numbness in the extremities, loss of coordination, and increased confusion, restlessness, or agitation. It can also result in more severe mood changes like depression, anxiety, personality changes, aggression, acting out, and social inappropriateness. More serious head injuries can result in a stupor that can be disrupted only briefly by a strong stimulus, like a sharp pain. Comas and vegetative states can also result.

Post-concussion symptoms are usually short-lived, but long-lasting problems can occur. Frustratingly, one of the most susceptible groups — children under the age of 20 — often experience the worst problems. Concussions are particularly bad for the developing brain (more here and here).

Some symptoms can persist for months and years, sometimes for as much as 30 years following the injury.

A recent study has linked concussions to Alzheimer’s risk. Older adults with a history of concussions have an increased build-up of Alzheimer’s disease-associated plaques in the brain than those who also had concussions but don’t have memory problems. Other studies have shown a link to amyotrophic lateral sclerosis (ALS) or Lou Gehrig’s disease — the likely result of repetitive head traumas and concussions, including those frequently sustained by many professional boxers, football players and other contact sports.

Falls account for 40% of all concussions — the leading cause. But it jumps to 55% for children (age 0-14) and a whopping 81% for seniors 65 and older. The second leading cause is getting hit in the head by an object — an unintentional blunt trauma — accounting for about 15% (or 24% for children). Vehicle crashes are the third leading cause at 14% for all age groups, but it’s responsible for 26% of all TBI-related deaths. Physical assaults are the next major cause, accounting for 10% of concussions; of these, 75% occur in adults between the ages of 15 and 44.

Being male is also a risk factor. Men are three-times more likely to die from complications arising from a TBI than a woman. And as already noted, elderly people are the most likely to experience a head injury.

The Neuroscience of Concussions

The damage caused by a concussion can’t really be seen with a CT or MRI scanner, but advanced neuroimaging techniques can reveal microstructural and functional changes. These can include axonal injury, metabolic impairment, alterations in neural activation, and cerebral blood flow perturbations. These sorts of injuries can alter the brain’s white matter — those long fibres that carry information from one area of the brain to another. 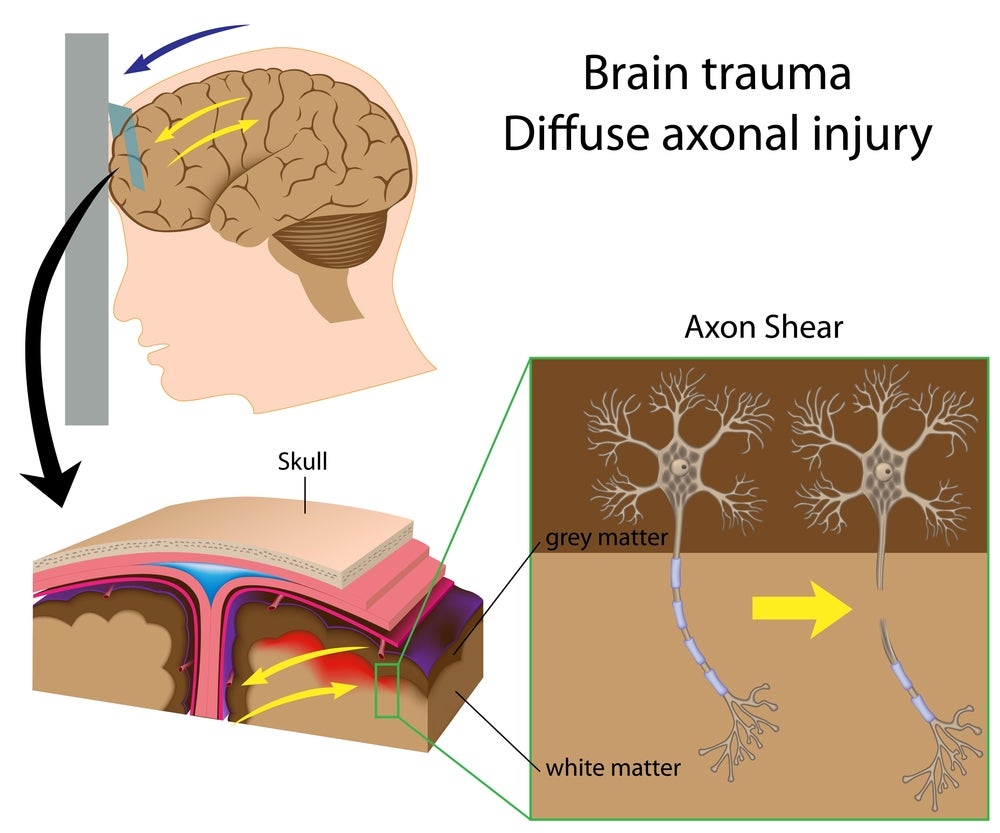 Trauma to the brain sets off a complex cascade of events. Problems are typically spread over a large area instead of a small focal point in the brain — so it can be seen as a kind of diffuse axonal injury involving stretching. Concussions are divided into three stages: (1) the initial acute cascade, (2) the middle phase of altered neural functioning (including impairments to neural activations and axonal disconnection), and (3) the final stage involving the accumulation of cognitive problems that sometimes lead to permanent impairments.

During these stages, the brain can experience impaired neurotransmission, a diminished ability to regulate ions (charged particles within the brain), disruptions to energy use and cellular function, and a reduction in cerebral blood flow (for reasons that are largely unknown).

Indeed, calling it a cascade is apt. For example, one of the things that happens is the excessive release of excitatory neurotransmitters. This results in cellular overactivity that causes neurons to over-fire. This in turn creates an imbalance of ions such as potassium and calcium across the cell membranes of neurons. The initial increase in glucose metabolism is followed by a reduced metabolic state which can persist for up to four weeks after the incident. This sudden drop in glucose causes an “energy crisis” within the brain. Even the activity of mitochondria may be reduced. Taken together, these cascading events interfere with normal brain function, but are largely reversible.

In addition, a TBI can slightly rip and fray the multiple layers of membranes located just beneath the skull, leaving them leaky and the brain vulnerable to the influx of molecules — namely reactive oxygen species, or free radicals. These are known to play a role in various normal tissue processes, including the inflammatory response to any injury. In excess, however, they can contribute to cell death and tissue damage.

A concussion needs to be diagnosed by a physician (where he or she will look at vision, hearing, balance, memory, concentration, etc.), but it can also be flagged out in the field, particularly during a sporting event. To that end there’s SCAT — the Sport Concussion Assessment Tool: 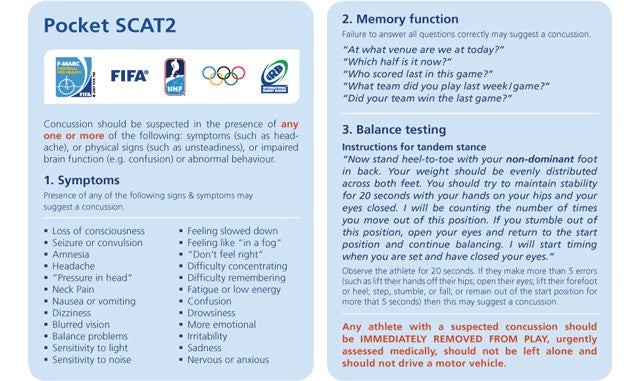 Physicians can also assess the severity of a TBI (and recovery) by measuring blood levels of total-tau — a protein signalling axonal damage in the brain. Other techniques are also being developed, such as advanced brain-imaging techniques, experimental blood or spinal fluid tests, and even a genetic marker that would enable doctors to identify chronic traumatic encephalopathy.

Needless to say, persons suffering from a head injury should receive medical attention as soon as possible. Little can be done, but it’s important to stabilise the person and focus on preventing further injury. It’s also important to ensure proper oxygen supply to the brain and the rest of the body, maintaining adequate blood flow, and controlling blood pressure.

Recovery takes about four weeks — though recover times and the severity of post-concussion symptoms increase with each successive concussion.

It’s a commonly held belief that a person suffering from a concussion should be kept awake and not allowed to sleep, but it’s not known if this is a smart practice; a case can be made that sleeping and resting may facilitate the healing process.

It’s also important to note that recovery from concussions is delayed by mental activity. So no cognitively strenuous activities for about a month — both at home and at school.

Recovering athletes are advised to follow a six-step plan:

Lastly, the best way to prevent a TBI is to to put on a helmet, wear mouth-guards, and avoid physically reckless behaviours. Unlike bones, brains don’t heal easily. Take care of it — it’s your most precious resource.

Other sources: Centres for Disease Control and Prevention [National Institute of Neurological Disorders and Stroke]