Takeaway Truth is an occasional Lifehacker feature where we compare marketing images against what you actually get served. Today: the KFC Zinger Black burger. (Plus taste test!)

The KFC Zinger Black burger is the most unusual takeaway product we’ve seen in quite a while. While the concept isn’t new — other “black” burgers include the heibai liangdao tongchi from McDonald’s in Hong Kong, the Kuro Burger from Burger King in Japan, the Black Crumbed Schnitzel burger from Grill’d and the Black Widow from Parlour Burger — it’s exceedingly rare for an Aussie mainstream takeaway chain to offer such a bold menu item.

The KFC Zinger Black burger comes with a Zinger breast fillet, cheese, bacon, lettuce, tomato and sweet mustard maple flavoured sauce, but the star is unquestionably its striking pitch-black bun sprinkled with chilli flakes and nigella seeds. Unlike some of the other black burgers we’ve tried which are coloured with bamboo charcoal or squid ink, the Zinger Black uses vegetable carbon (AKA “carbon black”) to dye its buns.

Here’s the advert for the new burger:

Earlier in the week, KFC sent a handful of Zinger Blacks to our office as part of a promotional blitzkrieg for the new burger. (The company didn’t know we were doing a Takeaway Truth and the burgers were cooked by staff at one of their regular stores.) Here’s a side-by-side comparison of how the Zinger Black stacks up to its marketing image:

Hmm. The bun isn’t as dark or devilishly glossy, but that’s mostly down to the lighting in our office. The salads aren’t propped up artfully like in the advert, and the cheese is noticeably paler but otherwise this isn’t a terrible likeness for a fast food burger. Not bad. Not bad at all.

So the KFC Zinger Black acquitted itself pretty in our Takeaway Truth test, but how did it fare against our taste buds? As I said in our initial news post, this burger is best described as bloody moreish. The sweet mustard maple has a slightly smoky aftertaste that suits the charcoal theme perfectly. It strikes a perfect balance between sweet and spicy. Here’s what the rest of the team thought:

I’d never had a Zinger burger before, but I don’t imagine the Pitch-Black edition tastes much different. Not that it wasn’t delicious — the outside of the chicken had that delightful KFC crisp crunch, the inside was moist and the mustard maple sauce added a sweetness to compliment the pleasant chili heat of the burger. But the point of difference of this burger is purely cosmetic. The bun, the only pitch-black part of the burger, tasted just like a standard burger bun. If you’ve had a Zinger burger, you’ve had the Pitch-Black Zinger burger. I suppose the gimmick worked – I’d never have tried the Zinger burger or discovered how tasty it was unless I’d been presented with this black variant.

However the real burning question here, the real reason you’re reading this article, is this: Does the pitch black hue change the colour of your poop? That’s one secret I’ll never tell. xoxo Gossip Girl.

So straight up: the Zinger Black Burger is the best KFC burger I’ve had in ages. I was actually pretty surprised. Maybe it was the vegetable carbon in the black bun — or maybe it was all in my head — but I loved the slight charcoal taste contrasted against the maple mustard flavoured sauce. I missed the full intensity of Zinger spice / chilli flakes I’ve come to expect, though. I’m guessing it was levelled out out by the sweet.

I still don’t know what the hell fancy nigella seeds are. Or if my poo will turn green (see Burger King’s black Halloween burger). But I will be trying the Zinger Black again. And that’s just about all you need to know right there.

Having gone through the process of losing 50kg in two years, I’ve developed a strong aversion to fast food. Not chips, really, but more going to a KFC, a Burger King, McDonalds and buying that kind of fast food.

Fortunately, that didn’t happen with the KFC Black Burger. In fact, I enjoyed eating it so much that my boss and I ate an entire burger, gave the rest of the office five minutes, and then cut the remaining burger in half so we could, to borrow some choice Westie vernacular, smash that too.

It’s best illustrated with a graph: 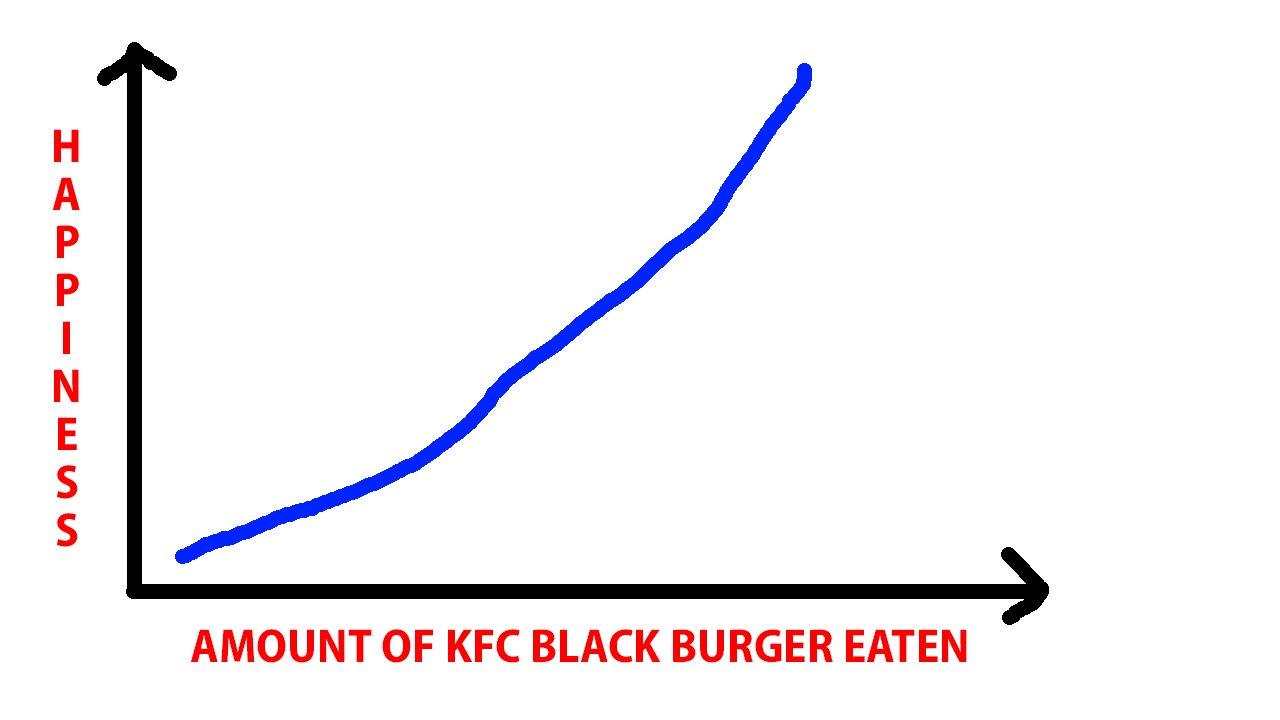 With the news that KFC regular chips are on offer for $1, this unholy coupling was enough to make me consider walking into a KFC store not only when I’m sober, but when I’m hungry on a regular basis. If you’re wondering why, it’s a combination of things.

The bun, for one, has a charcoal after taste that lingers. That’s thanks to the nigella seeds and chilli flakes, mind you, not the bun itself. Without those, it’d taste like Burger King Japan’s Kuro burger: a regular burger bun that happens to be coloured black.

It blends well with the Zinger patty though, as well as the maple mustard flavoured sauce and the bacon. The bacon’s pretty necessary in a burger like this – you need that fat to cut through – and it helps that the burger wasn’t drowning in sauce. There wasn’t an excess of lettuce either, and as someone who had a habit of shaking oodles of lettuce off Red Rooster Strip Subs as a kid it’s something I heartily appreciate.

But I have to go back to the graph. I dodge fast food wherever possible these days – and I liked KFC’s Black Burger so much that I wanted to slam a second. Hell, if my boss wasn’t as much of a closet fatty as me, I probably would have.

The Zinger is available from 22 March to 18 April for $7.45. Unfortunately, Tasmanians miss out but don’t despair — read our step-by-step guide to making your own!