The Complicated Science Behind When Babies Are Conceived

Chances are you were told in school that you could get pregnant any time you have sex so don’t have sex. But that’s mostly a lie to get you to keep it in your pants — it’s actually not that easy to make a baby. Illustration by Fruzsina Kuhári.

Even if you and your heterosexual partner went at it like rabbits for a year, you still only have an 85 per cent chance of being the proud parents of an embryo by the end of that time. Many people know this already, and have a hard time getting or staying pregnant — about 10 per cent of women depending on how you want to define that. (There’s no authoritative number for the corresponding rate in men.) But even when all the internals are in working order, the chance of pregnancy is lower than you’d think, thus the phrase “trying to get pregnant.”

Here’s an uncomfortable fact: 19 per cent of young women and 13 per cent of young men, in one survey, published in Perspectives on Sexual and Reproductive Health, believed they were infertile, and many of them said the reason for this belief was that they had had sex without contraceptives and a pregnancy didn’t result. “Our understanding about the probability of conception is really messed up,” says Chelsea Polis, lead author of that study.

Most of the people she surveyed thought that the chance of getting pregnant on any given day was 50 per cent or more. In truth, it’s about a 3 per cent chance on average, ranging from 0 per cent around the time a woman has her period, up to around 10 per cent just before she ovulates. Timing matters.

The Menstrual Cycle Is More Than Period On/Period Off

You know that women have a monthly reproductive cycle, and that expelling a blood-like uterine lining is part of that cycle. So far, so good. But if that’s where your knowledge stops (and sadly, for many people who aren’t women, that is where it stops), we have to talk.

The time in between periods isn’t just a three-week lull, but a hormone-driven dance of biology. Ignoring that is like watching a ballet theatre from the outside, going “hmm, a lot of people leave that building at 11pm on Saturday nights.” That only happens because because something really interesting is going on inside. 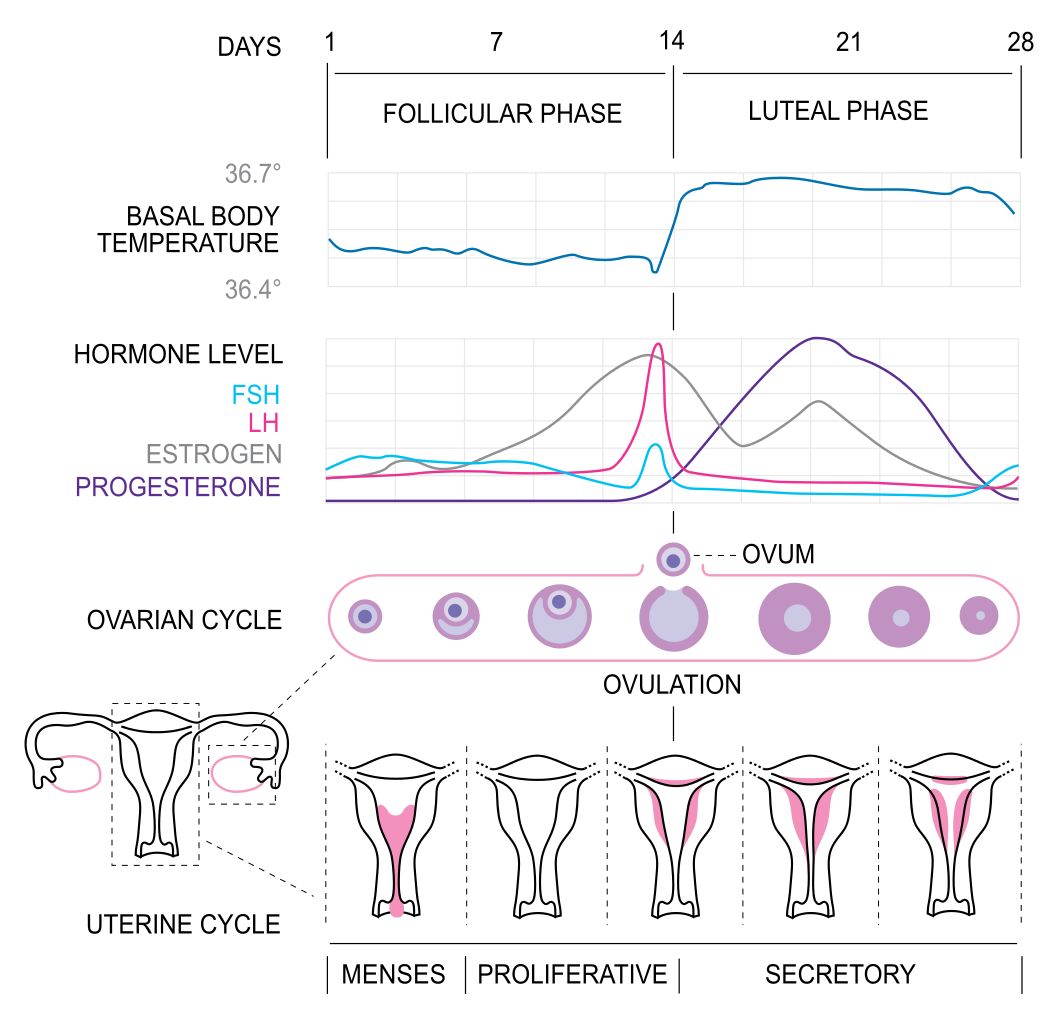 The first day of a woman’s period is considered Day One of the cycle, just because it’s the one event in the month you’re sure to notice. So that’s where we synchronise our watches.

For the first half of the cycle we’re in the follicular phase, so called because in the ovary, an egg is maturing inside its coating, aka the follicle. Actually, several follicles begin to grow, but only the fastest growing one gets to be ovulated.

That follicle releases its ovum somewhere around day 14 in a 28-day cycle. If you have a longer-than-usual cycle, it’s probably the follicular phase that is the long part.

Ovulation happens when the follicle ruptures and the little egg is free to float down the fallopian tubes into the uterus. Sometimes there is cramping or spotting, but it’s also totally normal to have no idea when you’re ovulating.

The next 14 days or so are the luteal phase. While the ovum is off doing its thing, its old follicle has transformed into a corpus luteum (Latin for “yellow body”) that keeps secreting hormones — now, specifically hormones that gear the uterus up for pregnancy. PMS symptoms can even feel confusingly similar to early pregnancy symptoms sometimes.

We’ve glossed over the hormone surges that orchestrate this whole crazy dance. There’s a more detailed overview here if you’d like to learn a little more — and if you’d like to learn a lot more, the best way to do that is to track what’s going on in your own body. Get started with an app like Eve (formerly Ruby) or Clue, or just start marking period dates and symptoms on a plain ol’ calendar.

Once you do, you’ll notice most of the annoying symptoms happen in the second half of the cycle, hence the name “premenstrual syndrome“, or PMS. Take note, jerks everywhere: if you joke that somebody must be cranky because she’s “on the rag”, you’re not just being rude, you’re also showing off your ignorance. Once a woman’s period has started, PMS is over and she’s back into the follicular phase again.

You Can’t Just Get Pregnant Any Time of the Month

You may recall a half-truth from your PDHPE classes: that a woman can get pregnant at any time in her cycle, so you have to be super vigilant about using contraception every time. In fact, the likelihood of getting pregnant on your or your partner’s period is just about zero.

It makes sense why teachers don’t emphasise that fact: Keeping tabs on your time of the month isn’t a good birth control strategy for most people. It’s an especially bad idea for teenagers who can’t count on their menstrual cycles being the same length every time. On the other hand, understanding where you are in your cycle can help women understand their body. If you only watch the calendar, this is the not-very-effective “rhythm method” you were probably warned against. If you use other clues and symptoms to find out when you’re fertile, that’s known as “fertility awareness” or “natural family planning”.

Other types of contraception, like good old condoms, are much more reliable at avoiding pregnancy than fertility awareness methods. We are not telling you to ditch your other birth control methods, just helping you to understand what’s going on as the month progresses. On the other hand, knowing when you ovulate is a big help for getting pregnant if that’s what you’re trying to do.

Let’s zoom in a little to the day ovulation happens. You might think this is a good day to get pregnant, but actually at this point the party is almost over. For egg and sperm to meet up at the right time, you would want to have sex a few days before ovulation.

That’s because the reproductive tract can harbour sperm for several days, guiding them to a storage area near the ovary. As ovulation time approaches, something in the female reproductive system hyperactivates the sperm, so that when the egg pops out of its follicle it can be fertilised right away.

So if you’re trying to get pregnant, the most likely time is the week leading up to ovulation, and particularly the last two or three days in that window.

This study published in Human Reproduction gives day-by-day probabilities of how likely a woman is to get pregnant each day. In the week of their period, almost nobody is fertile. The line there is near zero (with the non-zero probabilities maybe reflecting errors in record-keeping rather than actually being fertile at that time) and then the chance of sex resulting in pregnancy shoots up around where we’d assume the fertile window would be, for most people. Some people are still getting pregnant after day 14, but remember, these numbers come from large groups of people — so the later conceptions are likely the people who have a longer cycle and thus a fertile window that occurs later in the month.

Fertility awareness can work as birth control, but there are some huge caveats. First, your cycles have to be roughly the same length every time, and if not, you need to keep that uncertainty in mind. Second, you should be with a partner you know and trust, since you’re relying on them to be STI-free. And third, fertility awareness methods have a high failure rate. They’re as good as condoms if you really know what you’re doing, but very few people are that committed to knowing the inner workings of their uterus (or their partner’s uterus) every single day.

Keeping track means more than just watching the calendar. Clues to ovulation include:

Tracking these things can get complicated. Body temperature, for example, has to be measured at the same time and in the same conditions every day to be able to detect that tiny surge, so a typical way is to take your temperature first thing in the morning before you get out of bed. If you want to sleep in, you set your alarm, take your temperature, record it and then go back to sleep. If this sounds like a fun hobby, you’ll want a heavy-duty app like Ovia or Fertility Friend to properly geek out over all the data.

Remember that even with a lot of data it’s tricky to use this understanding to avoid pregnancy. The first few days of your period you’re probably fine, but you can’t always predict exactly when that fertile window will fall. Fertility awareness is much more useful, instead, when you’re trying to get pregnant.

How Long It Really Takes Before You’re Officially Pregnant

Once a pregnancy gets started, counting up the little peanut’s age is trickier than you’d think.

Let’s talk about the end of the pregnancy first, since that’s simpler. A textbook pregnancy is counted as 40 weeks long, with the baby being “full term” (neither early nor late) if it’s born between 37 and 42 weeks. In other words, a due date is an estimate, not a deadline. (I’m looking at you, everybody who offered snide comments and dirty looks when you asked my due date and I said “yesterday”.)

But on the other end, it’s even weirder. Here’s your mind blowing fact of the day: There’s no such thing as one week pregnant.

That’s because a pregnancy isn’t counted from when it actually starts, but from the start of the pregnant woman’s last regular period. Here’s what the timeline actually looks like for somebody with 28-day cycles:

Because of this timing, by the way, it’s a good idea for a woman to always know when her last period was. That way if you get knocked up by accident, you won’t have to wait for an ultrasound for a doctor to make a guess about how old the baby is; you can just tell them. You may also be able to avoid the “what if you’re pregnant” hassle around x-rays and the like.

So that’s when babies are made. If you want to make one, have unprotected sex just before ovulation; if you want to avoid making one, carefully avoid any day that might be anywhere near that same timeframe plus a few days on either side for good measure. Better yet, make use of any of these fabulous methods of birth control — they work any time.