Even With Background App Refresh Off, Facebook's Killing Your iPhone's Battery 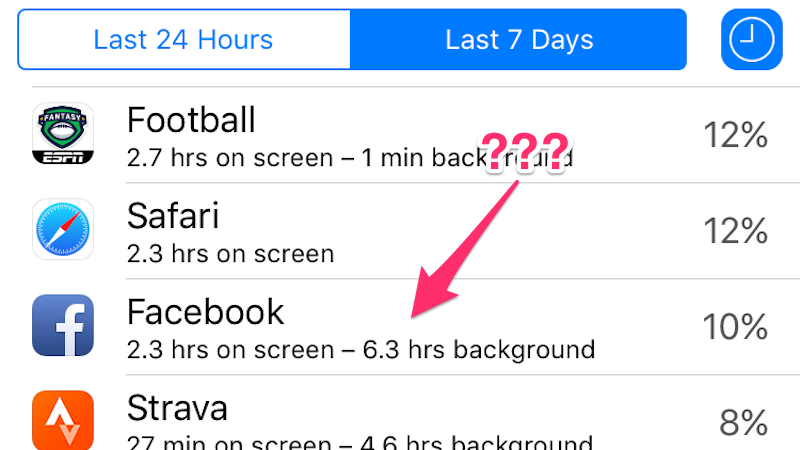 In iOS 8, Apple allowed apps to run in the background so they can stay up to date without you opening them. This tends to kill the battery life, but thankfully you can easily turn the feature off. However, doing that for the Facebook app doesn't seem to make a difference.

We've known that Facebook kills your battery for a while, but it seems the newest iOS versions are causing serious drain. A ton of people are claiming that Facebook's killing their iPhone's battery, usually with background activity, even with Background App Refresh turned off. Over on Medium, Matt Galligan points out that the app isn't sleeping properly, which results in serious drain. MacStories has a similar experience, pointing to "background audio usage" as being a possible culprit, which might have to do with auto-playing videos (which you can disable), though that's not confirmed by any means. Curiously, over on Pixel Envy, Nick Heer points out that turning Background App Refresh on actually helps improve battery life.

It's not just a few people's imagination either, TechCruch spoke with Facebook, who had this to say:

"We have heard reports of some people experiencing battery issues with our iOS app. We're looking into this and hope to have a fix in place soon," the spokesperson said.

For now, you have one solution: delete the Facebook app and use the mobile site.