Keep Your Bad Decisions From Getting Worse By Mastering Acceptance 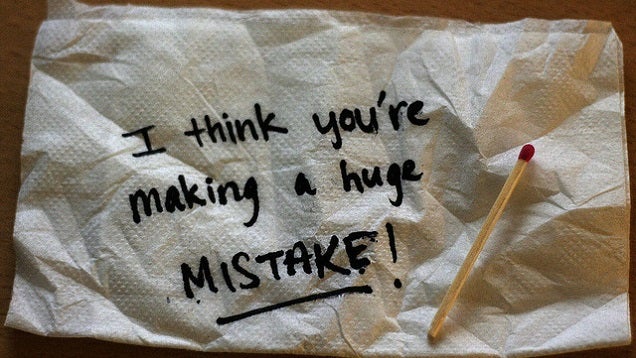 We all make a few bad decisions, but sometimes we let those bad decisions turn into paths to things much worse. Learning acceptance and coming to terms with your bad decisions can help you move on in the right direction.

There's always a moment after you make a bad choice where you can go one of two ways. You can either jump on the bad decision train and convince yourself that you might as well "go for broke", or you can accept that you messed up and change directions. In Chris Brogan's weginar program Brave New Year, Brogan likens acceptance to a bridge that sends you down the wrong path:

Say you make a bad choice. Once you do, what sometimes happens is you decide to go even more down the bad path. Acceptance tells you this: STOP! Now, assess where you are. Then, get back on the path towards your goals. Accept that you messed up. Remove that excuse next time. Act for next time. Once you lose ground, don't give up. Just figure out where you are, find the path back, and move forward.

Making a bad choice can feel like failing, but that doesn't mean you need to become a failure. Don't let your choices become a part of your identity. It's OK to make a bad decision! Stop, recognise you made the wrong move, and cut your losses. If you tell yourself it's alright to go for broke, you'll end up broke with a lot of regrets.

Brave New year [Chris Brogan via The Art of Non-Conformity]