Make Friends Outside Of Work To Make Changing Jobs Easier 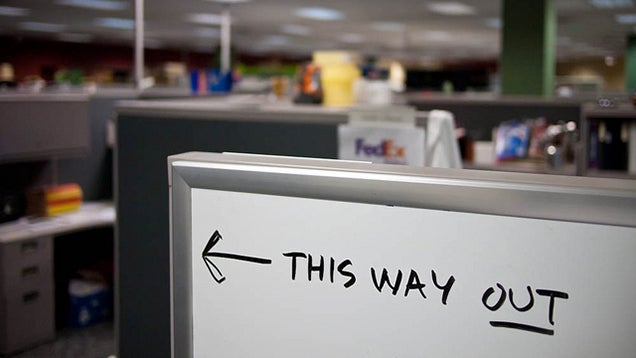 Making friends as an adult is hard. In fact, it's so hard that many people end up forging new friendship circles from their coworkers. While this is OK in moderation, relying too much on work friends can potentially hamper your ability to move up (or out) in your career.

Job portability is becoming increasingly necessary in the modern economy. When your entire social circle is dependent on the people you work with, however, it can make it harder to want to leave. After all, you could never leave this group of people, right? Or, as personal finance blog 1500 Days explains, it can make the sting much worse if you ever get fired, such as what happened to his friend Chuck:

Chuck's entire life was tied up in the job. He ate lunch with his co-workers. He played softball with them on the company softball team. He went out for drinks with them afterwards. They all went downtown together on weekends.

Layoff day came and I watched with a lump in the throat as Chuck was called down to The Room. Afterwards, his manager let him come back to his cube to clean it out and he wasn't just in tears, but full-on sobbing. It was very sad and uncomfortable. His life was destroyed in 10 minutes. It's great if you like your job and fellow co-workers, but don't build your life around them.

That's not to say you can't make friends with your coworkers. In fact, it's an essential part of networking. The important thing is to have people outside of work as well. Even if it's just a couple friends. Everyone needs a support system, but relying too much on one pillar makes the entire structure shaky.