Your Fellow Diners’ Appearance May Influence How Much You Eat 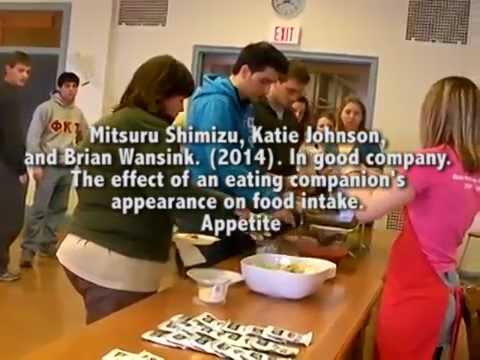 There are a lot of things that can influence our food intake: marketing, mindset and that slowly spinning cheesecake in the glass case. A recent study found that who you’re eating with — and whether they’re larger than you — may also affect how much food you actually end up eating.

The study, from Cornell University and published in the journal Appetite, had 82 undergraduate students attend four separate salad and spaghetti lunches. An actress — who is trim and in shape — was present for all four lunches and she did something different for each one. One lunch she ate healthily — more salad and less pasta — and another she ate less healthily, focusing on the pasta. For the other two lunches, the same actress wore a prosthesis that gave the appearance of having an extra 20kg of weight. While wearing the prosthesis, she again ate one lunch healthily and another less healthily.

The results were surprising for researchers Mitsuru Shimizu, Katie Johnson, and Brian Wansink. Here’s what they found:

A study of only 82 people is pretty small, but the results are big enough to show that your environment can definitely play a part in how you eat. So how do you counteract it? Researcher Brian Wansink recommends looking up the menu beforehand to select a meal that suits your dietary goals, and if you’re going to a buffet, pre-commit to how you’re going to portion yourself. Good advice regardless of who you eat with.

In good company: The effect of an eating companion’s appearance on food intake [The Journal Appetite via Cornell University]