Remote Play Stress-Test: We Play Destiny On A Smartphone 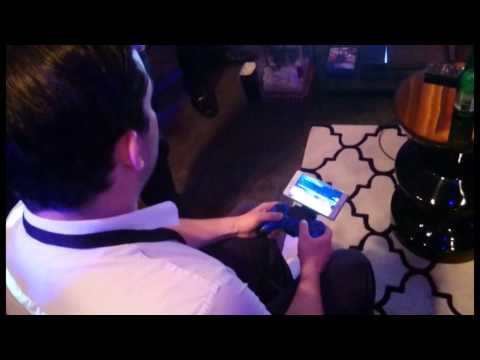 Remote Play is a mobile app compatible with the PlayStation 4 that lets you play your games on a mobile device instead of your television. We tried the feature out on a Sony Xperia Z3 smartphone while playing the first-person shooter Destiny. Can a 3D video game designed for consoles possibly work on a five-inch screen? Let’s find out…

This week, we attended the launch of Sony’s new Xperia Z3 smartphone range in Sydney. Among the features demonstrated at the event was Remote Play — a streaming app that lets you access PS4 games on your Xperia smartphone using a PS4 controller and clamp peripheral.

We tested the service with Bungie’s game-of-the-moment Destiny; a cutting-edge first-person shooter which boasts some of the most sophisticated 3D graphics on any console. The game runs in full HD at 30 frames per second and has obviously been designed for large HD TVs. In other words, if any game can break Remote Play it’s going to be Destiny.

Here is the verdict from Gizmodo editor and self-confessed Destiny addict, Luke Hopewell. (You can also watch the app in action in the video above):

When you’re gaming, you want the largest screen possible to get your next-gen console fix, but that absolutely kills portability. For a figurative age, the dream has been to pack the power of something like a PlayStation 4 into a mobile console. There have been many attempts, but Sony’s new remote play feature on the Xperia Z3 and Z3 Compact might have just cracked it wide open.

Remote Play on the Z3 smartphone variants is something Sony announced at this year’s IFA tech fair in Berlin. The company realised it made excellent games consoles and excellent phones, so it decided to blend them and come up with a great way for you to game on a second screen in your house.

Basically, it’s a clamp that goes unobtrusively onto your PlayStation 4 controller that allows you to insert your Sony Xperia Z3, Z3 Compact or 8-inch Z-family tablet into the mount. From there, you pair your phone with your PlayStation 4 via the app and the content — be it a game, movie or otherwise — is automatically cast over to your phone. Switch off the TV and game away on your smartphone or tablet screen like a future-tech badass.

When you’ve got the screen attached to your controller, it feels like a hardcore version of the NVIDIA Shield handheld, with twice the power.

When I sat down to play it the other night, I genuinely thought it would suffer from massive lag and an obnoxious experience on a tiny screen, but I was wrong on both counts.

Sure, the screen on the Z3 is a little small for AAA gaming, but the colour, resolution and brightness of the screen makes it a fantastic second screen experience around the house, plus, it barely lags at all so you can jump into The Crucible multi-player on Destiny and still frag someone’s face off.

Obviously, you’re not going to be using Remote Playon the regular. It’s a great way to get a second screen experience if your significant other boots you off the couch to watch a show or a movie.

So there you have it. Surprisingly, it seems Remote Play could be more than just a gimmick. With any luck, Sony will eventually see fit to bring the service to other Android devices. Until then, you’ll need to snap up an Xperia Z3 or Z3 Compact which retail for $849 and $699, respectively.