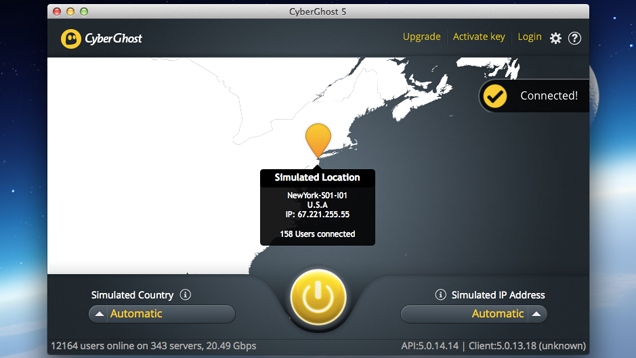 Mac: CyberGhost VPN, one of our favourite VPN providers, finally has an OS X client. Mac users can now use the free VPN service to browse the internet securely and anonymously.

Mac access to CyberGhost VPN has always been available, but only as a premium subscription using VPN protocols such as PPTP and L2TP/IPSec. Using the new client is completely free and doesn’t require any additional configuration. You get AES 256-bit encryption and your traffic isn’t logged. It does have the same limitations as the PC client, however: a three-hour limit and a smaller set of servers (40 vs 227) and countries (16 vs 24).

With the addition of the Mac client, which we somehow missed a couple of weeks ago, CyberGhost VPN now has desktop clients for OS X and Windows. Linux is supported via PPTP, L2TP/IPSec or OpenVPN. There’s also a mobile app for iOS and Android.