Why We Procrastinate In The Afternoon (And How To Stop) 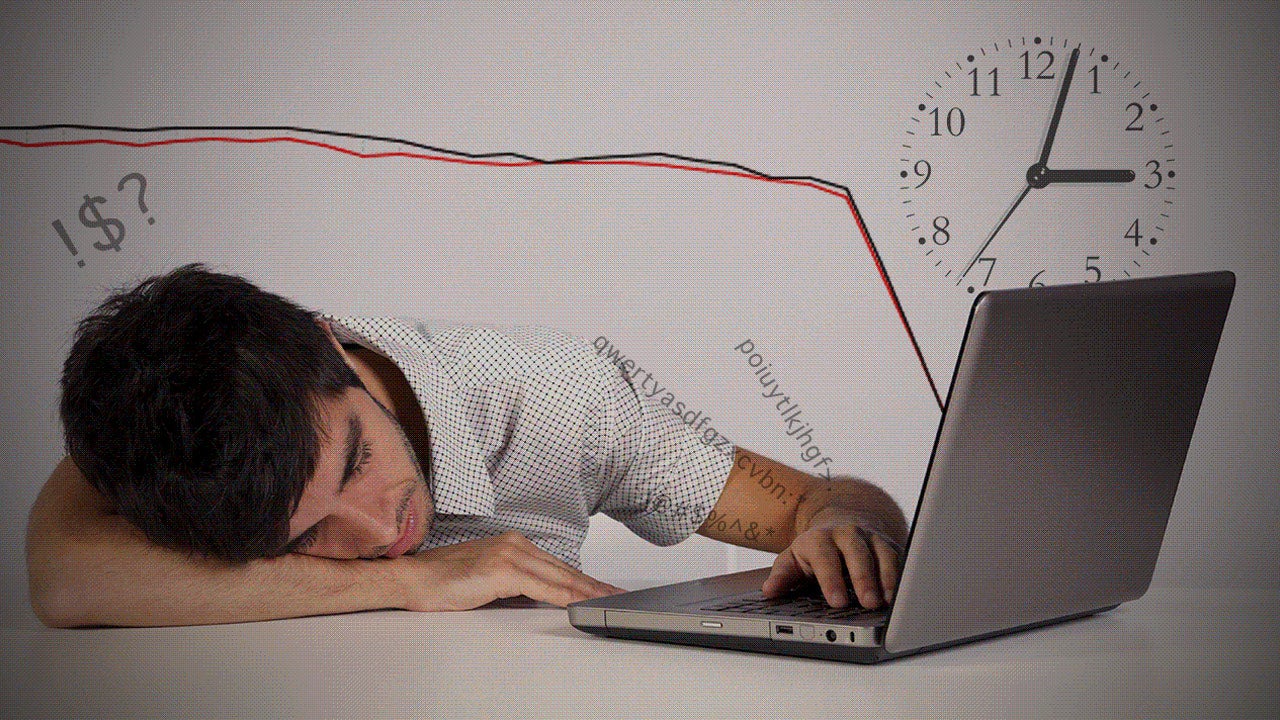 It’s 3pm and you find yourself struggling to focus on work. You can’t seem to stop checking Facebook. Instead of being productive, you welcome distractions like text messages and co-workers coming by to chat. Welcome to the afternoon slump: that time in your workday when your brain refuses to cooperate with you and you can’t stop procrastinating.

Why Can’t I Focus In The Afternoon?

There are many reasons for feeling the mid-afternoon dip. According to a study by Gallup, 40 per cent of Americans don’t get enough sleep. Getting enough sleep is a cornerstone habit that has many positive effects, mental and physical performance improvements among them. If you’re not getting enough sleep , your brain is not functioning optimally.

Research also points to our circadian rhythms as a cause of mid-afternoon tiredness. Our mental performance ebbs and flows throughout the day:

What you ate at lunch also has an effect. Food coma is a real phenomenon, and when you eat crap, you’ll probably feel like crap. You could also just be drained after a full morning of tough meetings and debates with your team. Willpower is a finite resource; we all start with a certain amount every day, and it diminishes with every decision or choice we make.

Whatever the reason for your lack of afternoon focus, let’s look at some research-backed lifehacks to help break out of the daily slump and finish your day strong.

Eat Something With The Right Kind Of Sugar

Making decisions and concentrating on tasks tire out your brain. It’s an effect called “ego depletion.” In a study looking at the factors affecting judicial rulings, researchers found that the likelihood of a favourable parole verdict was highest when the judge recently had a food break: 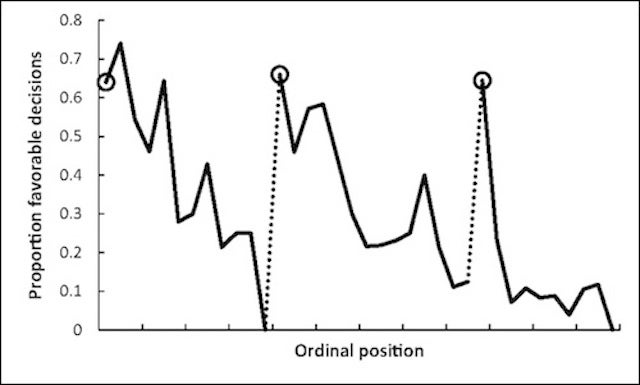 We’ll come back to the judges in a second.

In a study about willpower by E.J. Masicampo and Roy Baumeister, participants were asked to watch a silent video of a woman talking while words flashed on screen. One group was asked to focus their attention solely on the woman and try to ignore the words. The second group received no particular instructions.

The researchers measured participants’ blood-glucose levels before and after the task. They found that the group who had to exert effort to ignore the flashing words words had significantly lower glucose than the other group who’d simply watched the video.

So what’s the link between the judges and the silent video? Glucose — a type of sugar — plays a role in our mental performance and decision-making ability. When your willpower is running low, you tend to make the decision that presents the least resistance. In the judges’ cases, they chose to keep the status quo and deny parole instead of making the much more difficult choice of setting a prisoner free. In your case, it’s choosing between checking Facebook or diving into a spreadsheet.

So how do you replenish your willpower? Eat something and make sure it has the right kind of sugar. Masicampo and Baumeister’s findings showed that sweeteners like Splenda don’t count, and you don’t want to go for a sugary or starchy high either. Instead, as Baumeister suggests in his book, Willpower:

To maintain steady self-control, you’re better off eating foods with a low glycemic index: most vegetables, nuts (like peanuts and cashews), many raw fruits (like apples, blueberries, and pears), cheese, fish, meat, olive oil, and other “good” fats.

It’s the afternoon. You could really use a nap, but you fight the urge. You press on at half your mental capacity instead of taking time to recharge. We keep seeing more and more literature that napping is not only natural but really good for you. Consider how many of us aren’t getting enough sleep and a siesta starts to make a lot of sense!

How long should you nap for ? Before we answer, we have to understand the concept of “sleep inertia,” which is that grogginess you sometimes feel upon waking. That fuzzy feeling isn’t great when you’re in the office. We want to avoid that. Sleep inertia comes into play after 10 minutes of napping. So if you’re looking for a quick pick-me-up, 10 minutes seems to be the magical interval for your nap. Anything more than that and you’ll wake up feeling a bit groggy, and you’ll need to spend extra time to grow alert.

For the ultra-efficient, there’s also some evidence that a six-minute nap is enough to improve mental performance.

If you find that you’re always tired, despite eating well and getting enough sleep, then you may need to get moving during your lunch break. Stress may be the culprit. One of the many benefits of exercise is that it reduces stress, lowering levels of stress hormones and increasing endorphins, which enhance moods and relieve pain.

With a poll from Everest College showing that 8 out of 10 Americans suffer from work-related stress, and with stress and anxiety among the top reasons for lack of sleep, it’s clear that people everywhere could use a few more endorphins during office hours.

What kind of exercise should you do? Fortunately, almost any type of exercise will yield positive results. 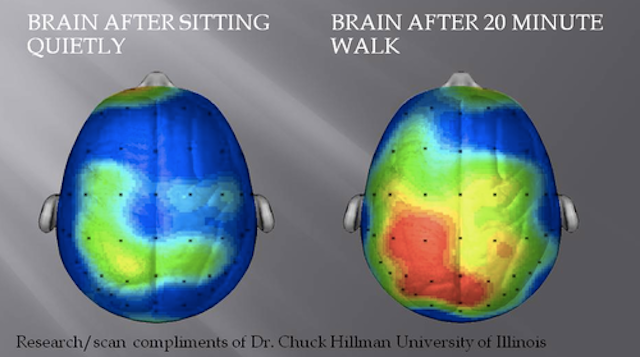 Research led by Charles Hillman shows that even after something as easy as a 20-minute walk can improve cognitive performance. While these scans illustrate brain activity in nine- to 10-year-olds, studies show cognitive benefits of walking at older ages as well. So get out there and move!

To maximise the release of endorphins, follow advice that high-intensity exercise is best for reducing stress and anxiety. So instead of jogging on the treadmill, do sprints. Not only will you get more endorphins, you’ll be able to get more results in a shorter amount of time.

Take A Break That Benefits Your Whole Team

It’s the afternoon and you’re finding yourself unable to concentrate. What would you normally do in this situation? If you’re like most people, you’ll try at least one of these things:

The logic seems clear: I’ll do something to take my mind off work for a second so I can recharge. Then I’ll return to my desk with more energy. We’re now learning that such “microbreaks” don’t actually restore our energy. In fact, they take up energy and have the added effect of distracting us.

So what should we do on our breaks? In order to gain the most energy from breaks, do something positive and work-related. Taking a break to compliment a colleague on a job well done, for example, is more effective at boosting your energy than a bathroom break or an afternoon espresso. Plus, compliments are powerful: they can boost your performance.

The next time you need an afternoon jolt, do your team a favour: praise a coworker and you’ll both benefit.

Know Your Mind And Body

It’s impossible to work for 8 consecutive hours. We’re not robots. We need to take breaks and take time to recharge and renew with food, sleep and exercise. We’re constantly learning more about willpower , motivation, and managing our energy at work. Still, nothing will beat your own firsthand experience. Run your own tests and experiment with ways to recharge. Keep a journal to note when you’re feeling tired and see what works for you!

The Science Behind Why You Procrastinate In the Afternoon [iDoneThis]

David Fallarme leads Product Marketing at Pie, an app for sharing links and starting discussions with your team. Say hello to David on Twitter.