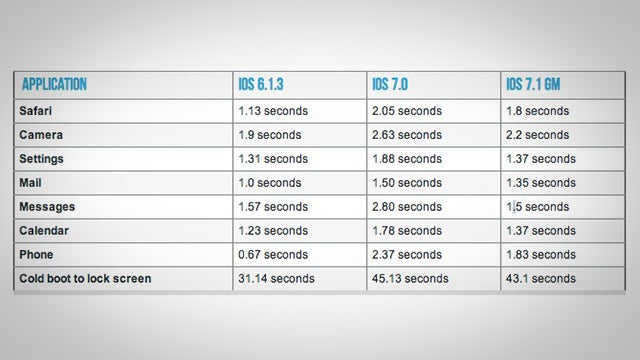 When iOS 7 was released, iPhone 4 users experienced a dramatic slowdown that in many cases left devices nearly unusable. Thankfully, according to Ars Technica, the just-released iOS 7.1 fixes a bunch of problems and makes iOS 7 actually work on the iPhone 4.

iOS 7 is missing a bunch of features on the iPhone 4, but it runs terribly. Users have complained about jerky performance, glitchy animations, and slow loading of apps overall. In an exhaustive breakdown that includes the chart above, Ars Technica had this to say:

iOS 7 is unlikely to run better on the iPhone 4 than it does in iOS 7.1. That's not to say that the experience is great — even stepping up to an iPhone 4S would get you noticeable gains in performance and overall smoothness — but it's better than it was, and it's as good as it's going to get.

If you're sticking with the iPhone 4 for another year, iOS 7.1 makes performance tolerable enough that using the phone isn't unbearable. The benefits to trading up are unmistakable, though — you get better performance, a larger screen, more RAM, faster Wi-Fi and cellular speeds, and a boatload of extra features only available to new hardware. By the time iOS 8 rolls around later this year, you should really think about stepping up.

If you're holding onto your iPhone 4 for another cycle, this is great news. For a full breakdown of all the performance tweaks in iOS 7.1, head over to Ars Technica.