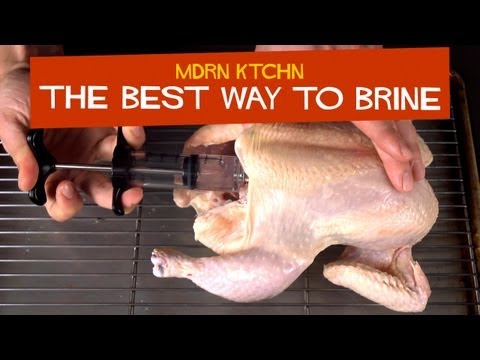 You probably know that a good brine can keep meat flavourful and moist, but do you know why? This video from the team at Chow and Modernist Kitchen explains both and offers up a technique called “injection brining” that will change the way you cook.

When you dissolve salt into water, it dissociates into sodium ions and chloride ions, positively and negatively charged respectively. Those ions then diffuse into the food, and the chloride ions specifically attach to the protein filaments in the meat, giving them a slight negative charge. Those filaments repel, leaving room for the sodium-rich water to come in and hang around. The science of brining is explained in more detail in the video.

Now normally brining takes hours, sometimes days if you really want it to work well, but the Modernist Kitchen team came up with a method that takes much less time and preserves the crispy skin you might like on a roast chicken, turkey or even Christmas goose. Just grab a flavour injector — you know, the ones you can get at the supermarket. Instead of injecting into the meat from the outside, use a brine in the syringe and inject from the inside, directly into the muscle of the bird, an inch or so apart from each injection, without breaking through to the skin. It’s faster than traditional brining, makes the meat almost as moist and lets the skin crisp up nicely.

For a more detailed description of how injection brining works, watch the video above, or hit the link below. The recipe for that injectable brine is there as well.