This Indian Shortbread Cookie Will Melt in Your Mouth

No one has ever said, “I think we have enough cookie varieties, let’s stop.” Even with a cookie as simple as the buttery shortbread; yes, it’s excellent in its purest form, but I won’t be mad if you squeeze in some chocolate chunks and espresso powder. The Scottish kind may be crisp and buttery, but the Indian Nankhatai is a cardamom imbued shortbread cookie that gives “melt in your mouth” a whole new meaning. You need it in your life STAT.

Shortbread, short cake, short crust and all “short” doughs are named in such a way due to their high-fat ratio leading to a more crumbly product from less gluten development (unlike lean doughs, which are high-gluten breads, like a baguette or pizza dough). At its most elemental, a shortbread cookie is composed of flour, a fat, and sugar. When the ratio is just right, you’re rewarded with a delicate, sweet snack that breaks with ease, and dissolves on your taste buds in such a way that’s so tender, you’ll want to listen to Jewel’s “I’m Sensitive.”

Nankhatai are made of the same elements, but the flour and butter components are unmistakably elevated versions of the hum-drum all-purpose flour and sticks of butter. These Indian treats use a combination of flours: all-purpose, semolina (also called suji), and chickpea (also called gram flour or besan). The butter used is ghee, or clarified butter — butter from which the milk solids have been removed. This is a big deal because water has no flavour, and it has a notorious relationship with wheat flour. Whenever they get together, they start making gluten strands and that can lead to a tougher product. Ghee has concentrated buttery flavour and creates a shorter dough (let’s start using our new terms, shall we?). Compare this with stick butters that are composed of 18%-20% water, and ghee wins, hands down. The combination of ultra-soft chickpea flour and sandy semolina flour with toasty ghee produces a biscuit that can just barely hold it together long enough for you to put it in your mouth. You’ll take one crisp bite before the texture changes rapidly; the next moment, it melts, and all the aromatics and textures diffuse across your palate. 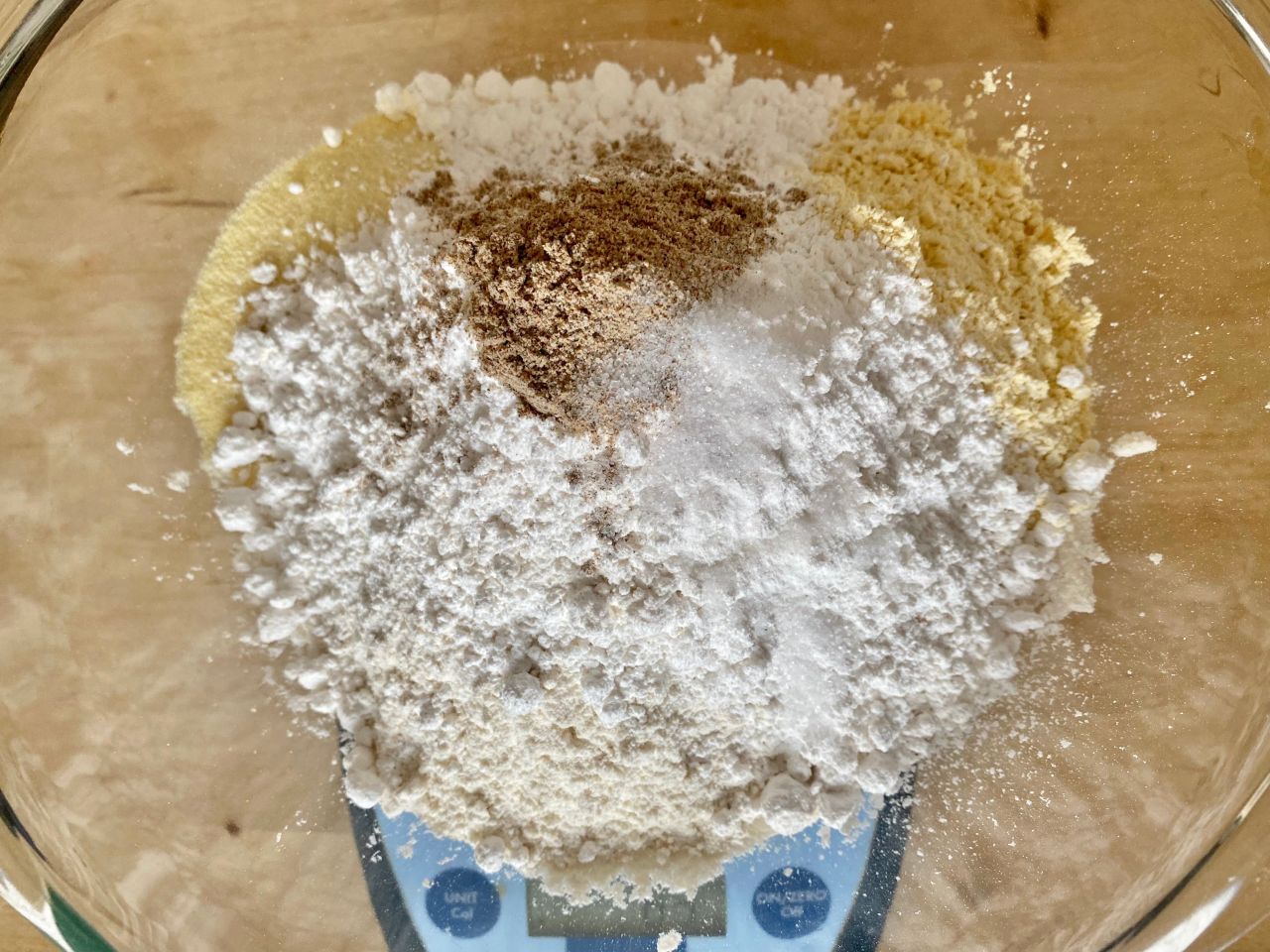 To make Nankhatai, I used this recipe from Spices N Flavours, but there are many others with great bits of information if you’re interested in knowing more or are looking for a variation — like this one, which gives the option of using a pressure cooker. I noticed that some recipes include a leavening agent and many do not. I came across everything from “a pinch” of baking soda to one full teaspoon of baking powder with ½ teaspoon of baking soda. I tried a batch with a pinch of baking soda and one without. Both recipes were successful, with the baking soda batch puffing just slightly more, as expected, but tasting the same. They both had the traditional cracks along the outside. 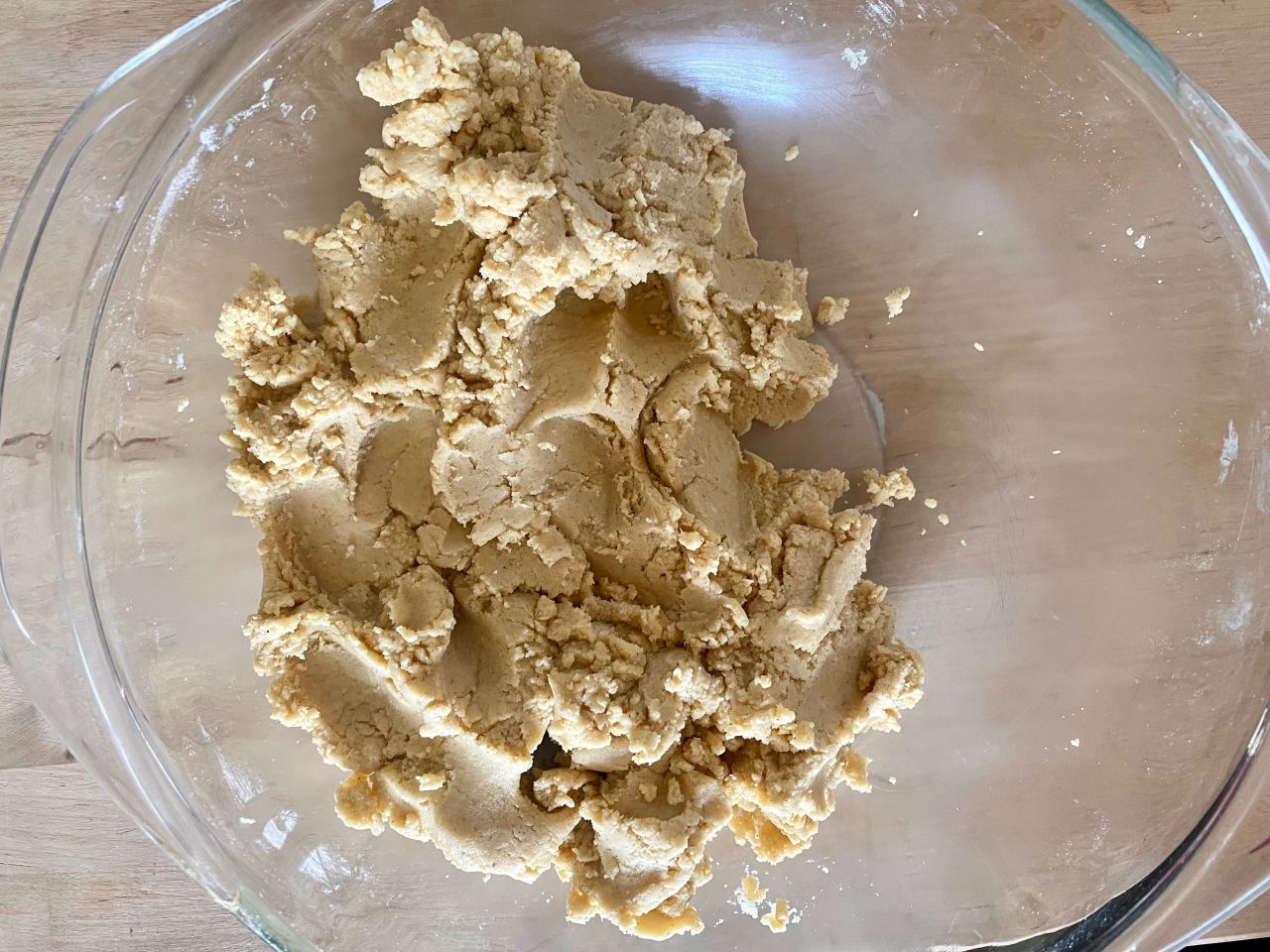 I prepared the recipe as directed by combining the dry ingredients and, since I did not have ghee, I made my own on the stove (you can also do it in the microwave, if that suits you). I cooled it off in the fridge until it was just getting sludgy, but not hard. I added the ghee to the dry mixture and combined until the butter was fully integrated but the mix was still crumbly. At that point I recommend using your hand. Just start smooshing sections and moving them around to pick up any dry bits until it’s in one large mass. The recipe was spot on, including chilling them in the fridge and the bake time. It recommends putting an extra sheet pan on the rack below the one your cookies are on. I did this because sometimes my gas oven can over-brown my cookies, and I’m glad I did because they were absolutely perfect. 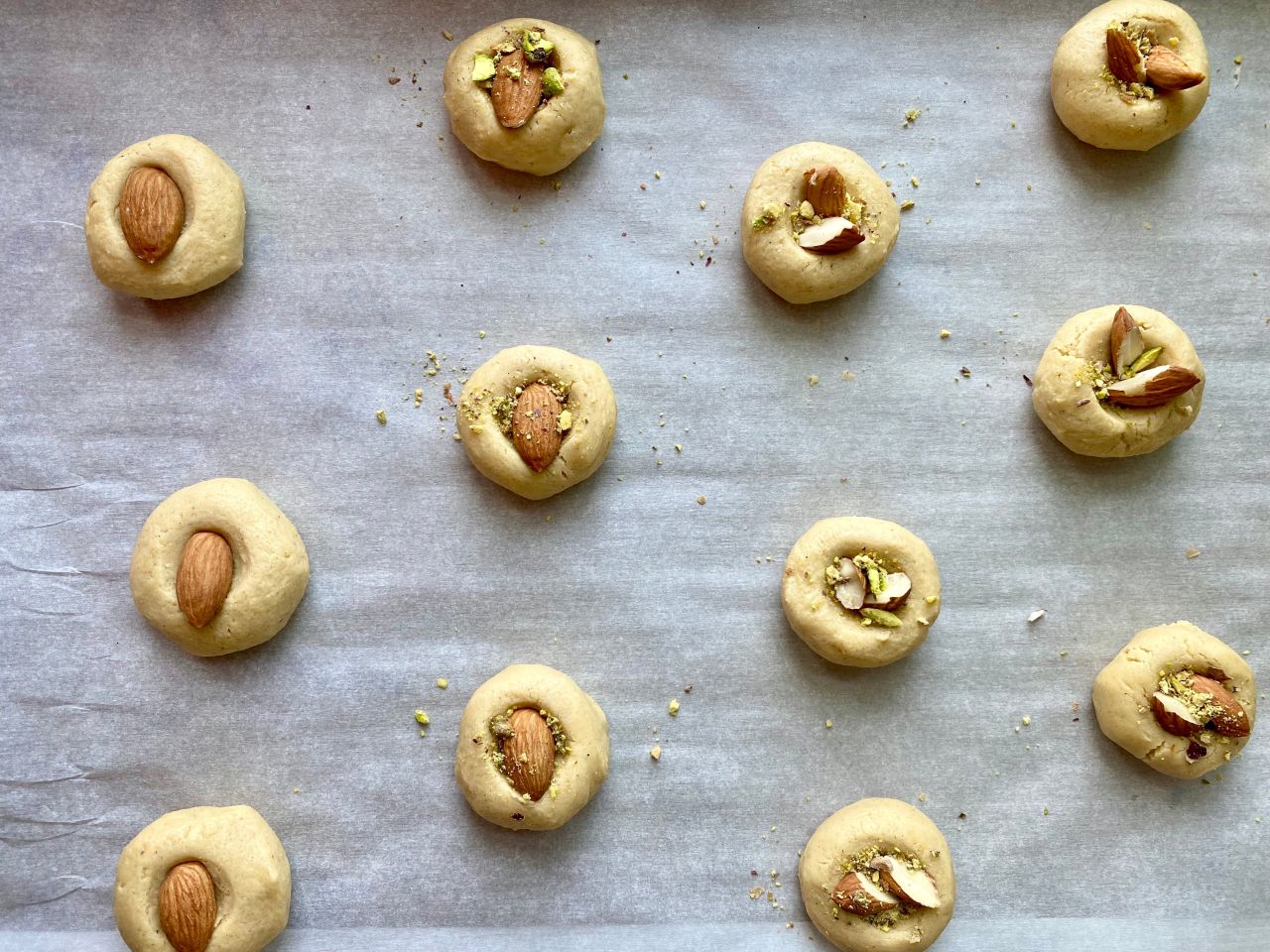 If you like cookies at all, this is a recipe worth trying. Don’t let the ghee stop you — it is in most large grocery stores, but it’s also easy to make. Chickpea and semolina flours are also readily available and affordable. (I used Bob’s Red Mill.) It’s also egg-free, and if you’re cardamom averse, leave it out or trade it for an equal amount of cinnamon. Your house will smell equally divine, no matter which spice you choose.