A recent study reveals that colour can be a big factor in resale value of a car — with a three-year depreciation rate that can vary 25% between colours. What’s most surprising is that oddball colours, like yellow or orange, actually do better overall compared to traditionally “safe” colours like black or grey. But should a colour’s resale value be a big factor in your buying decision? Well, it’s not that simple — the range in depreciation is distorted by scarcity, model type, and shifting consumer taste.

Safe, boring colors neither hurt nor help you

According to an iseecars.com study, the overall range for depreciation of cars within three years, based on colour alone, ranges from 20.4% to 45.6%. 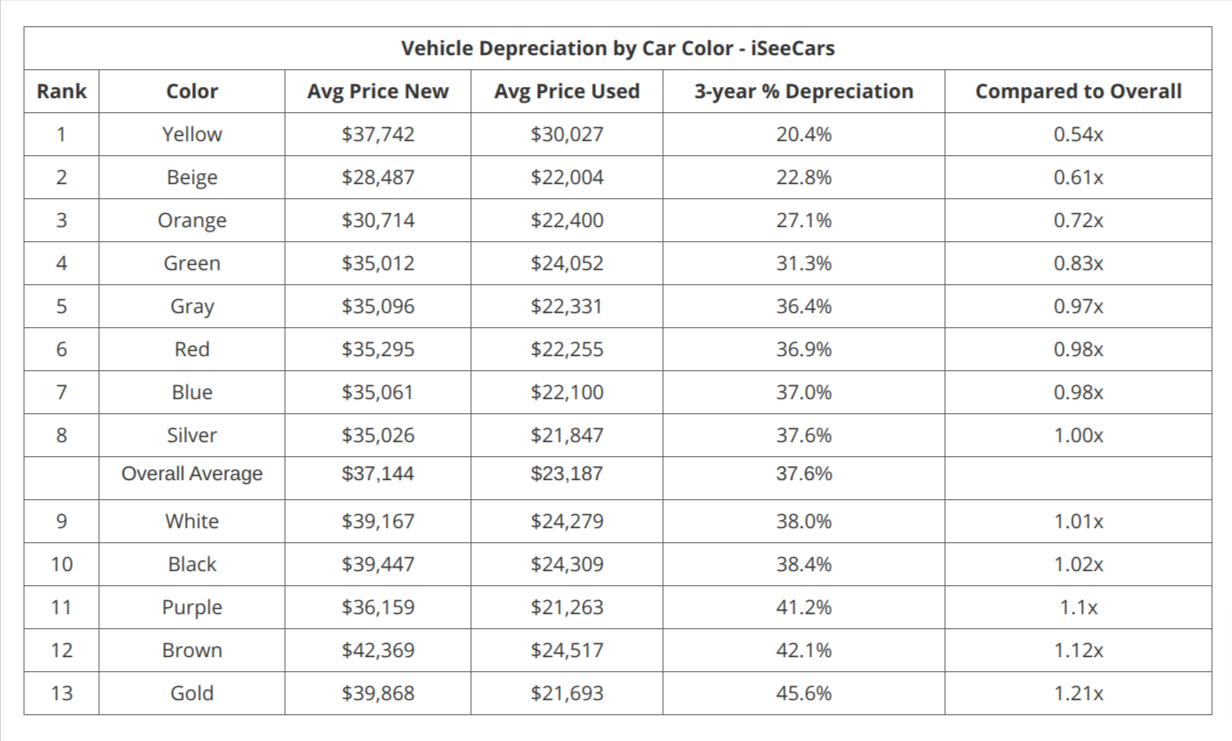 Surprisingly, popular colours like white, black, and silver are right in the middle of that range, while yellow, beige (yes, beige), and orange offer the most value. Why would this be so? As iSeeCars Executive Analyst Karl Brauer, puts it:

There’s a bit of a self-fulfilling prophecy going on here, with many consumers picking these mainstream colours not because they like them, but because they assume everyone else does. This makes white, black, and silver appear to be in high demand, yet our analysis confirms that more obscure colours tend to hold their value better than common and popular colours.

But a lack of supply for more rare colours doesn’t fully explain the discrepancy, either, as the results vary quite a bit depending on the make of the car, and even between models. For example, orange isn’t a common colour, yet it’s popular with sportier SUVs or flashy coupes — but it depreciates by additional 10% when the vehicle is a sedan. (And just because a colour is rare doesn’t mean it guarantees more value, as brown and gold are both scarce and in low demand).

Additionally, some colours are in high demand in car type categories that traditionally have low depreciation (like coupes), and that can skew the overall results and make it seem like a colour is more popular than it really is, on average. As Tyson Jominy, vice president of data and analytics at J.D. Power, explains to Autoweek:

The danger is in relying on averages for an attribute like colour, that is not distributed normally across vehicles and segments. We have to isolate a specific vehicle to determine the impact colour has on deprecation. How does a yellow F-150 compare to black F-150 or a silver 911 vs a blue 911? Here we find that colour may add or subtract a nominal amount at disposal, perhaps up to a couple hundred dollars.

How much should you consider colour when buying a car?

It’s possible to make a few extra bucks when reselling your vehicle by strategically selecting a colour that’s popular for that model. For example, you might buy a beige truck under the assumption that it will remain the most popular truck colour since, as the New York Times points out, many truck owners are small business owners that need a neutral colour for signage on their work truck. On the other hand, you’re likely to have less luck chasing a currently popular colour like yellow, as tastes can easily change by the time you’re ready to sell it. (Remember how big teal was in the 1990s?)

“The reality is, buy whatever colour you want without worry,” Jominy says. “Colour should rank with other ownership factors, such as geography, vehicle maintenance, smoking, pets, young children, or long commuting miles. The differences are so small at trade-in time, and if a dealer doesn’t offer enough on your trade because you have a flashy colour, post your car on any national used vehicle sales channel to sell it privately to another consumer who will.”