This may be a wildly unpopular opinion, but cooking on a gas grill is cheating. There is something both primal and humbling about cooking over an open flame that you started yourself, but you have to let go of a small portion of your ego, and accept that the fire is the one that makes the rules here. (Let’s be real — relinquishing control can be the hardest thing to do in almost any scenario.)

So now I implore you: Chuck your food in the fire and watch it burn.

Unlike gas ovens and stovetops that we can bend to our will, there is much less we can control about an open fire. Maybe the wind is messing with your airflow, or your wood has more moisture than you’d like. Whatever it is, the best you can do is observe and react. But the reward is entirely worth it.

So now I implore you: Chuck your food in the fire and watch it burn.

Feasting around a fire has origins all over the world, so I am certainly not the first open-fire-obsessed home cook to toss whole ingredients into white-hot coals. Dwight D. Eisenhower did it with his steak — aptly called the Eisenhower steak. Lennox Hastie, chef and owner of Firedoor in Sydney, Australia, calls for it in plenty of his open-fire recipes. More and more cookbooks are coming out and calling for this “caveman” style of grilling. With asada in Argentina and Uruguay, grigliata in Italy, churrasco in Brazil, barbacoa in Mexico, and “low and slow” BBQ in the United States, you can find grill masters across nearly all continents using this technique to release entirely unique flavours.

Once you get over the initial hesitancy, you’ll become obsessed as this frighteningly fast style of grilling rapidly alters and unleashes flavours from each ingredient that you throw in the pit. And no, you’re not going to get the same result from a stovetop flame or a broiler. There is sugar in hardwood that comes from their higher levels of hemicellulose, and the smoke that lifts from those hardwoods is going to infuse a sweet smokiness in nearly anything you lay on the super hot coals. You can smell the sugar released from the corn kernels, watch as the crust of a steak forms in seconds, and admire the way the hot embers paint a perfect char along your vegetables. Break through those crusts and you’ll find the smokiest, most tender version of each ingredient. All you need is a fire, good ingredients, and minimal tools.

How to prepare for coal-cooked greatness

You don’t need a lot for this style of grilling, but the few things you do need are tremendously important:

What you don’t need are briquettes. It’s fine to cook over the grate with these but cooking directly on them will infuse your food with a distinct synthetic chemical flavour.

Building a different kind of fire

One of the most common grilling mistakes is made by the burger pressing, sausage poker who encourages flare ups with all of their pressing and poking. You don’t want to cook your food in high, licking flames. You want the dangerously hot, glowing embers that have been reduced down to pure carbon and sugar chains. These are the beauties that provide the clean, persistent heat we want.

If you’re using lump charcoal, fill and light two chimney starters worth of coal, and let them heat until they’re white hot. If using hardwood, let your fire burn down into white-hot coals. Break them up with a fire poker as necessary. Spread the coal embers out over your lower grate in an even layer.

If your embers have any soot or ash, now’s the time to fan them and blow away any dust that might stick to your food, but there’s no need to be meticulous. The heat of the embers will form a protective crust of delicious char on your food, and what little ash might remain can be brushed off.

Once you’ve got your fire prepped, you’re ready to cook. Here are just seven of my favourite ingredients to get started with. 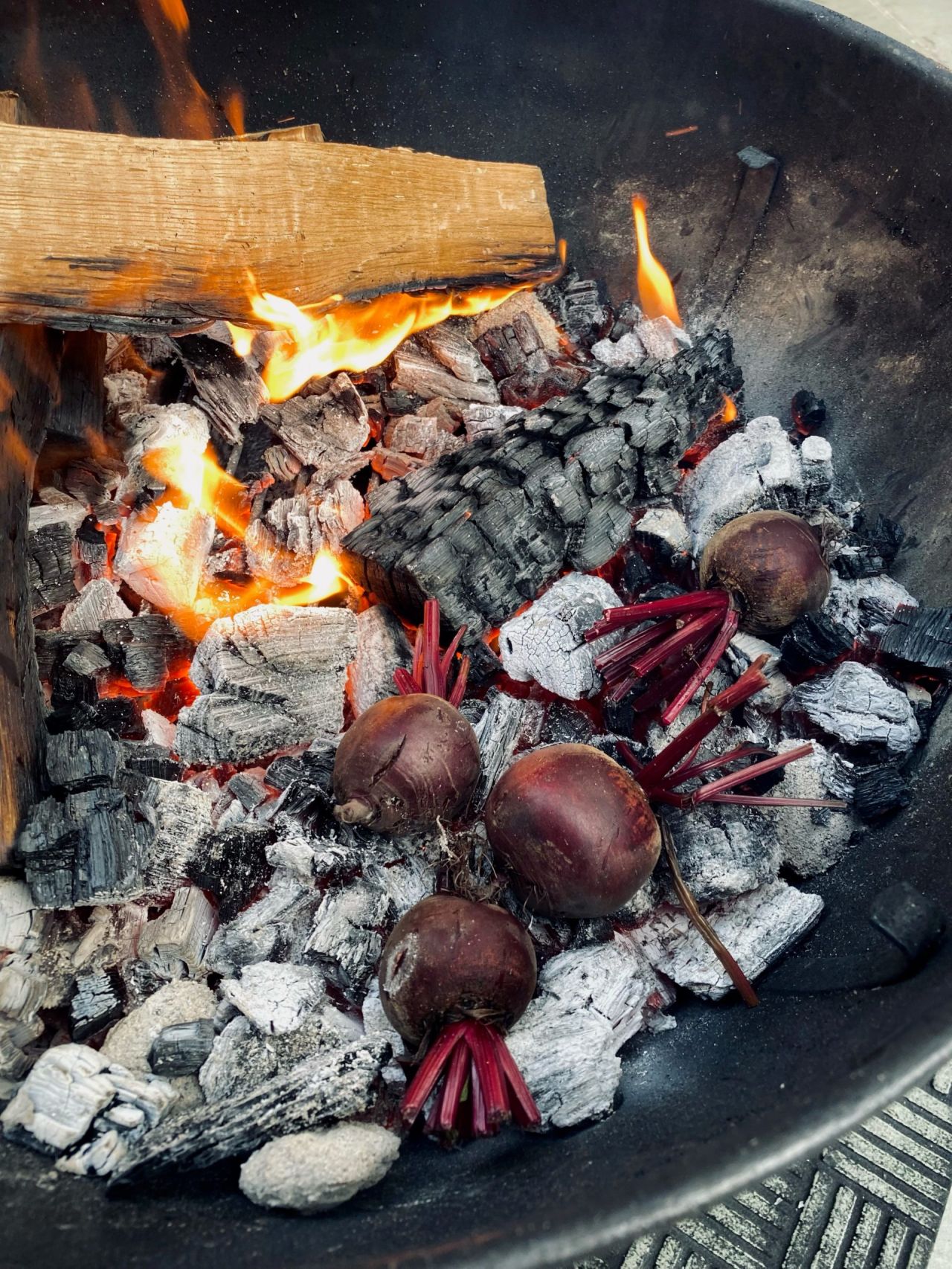 If you’re just beginning your journey into coal roasting, beets are a great starting point. The protective skin is meant to be blackened and charred, preventing them from cooking too quickly.

Prepare your beets by scrubbing them clean and chopping off the stem and leaves. Nestle them in the embers, turning often, until they’re evenly charred. When they’re done will depend on the size of your beet and the heat of your coals, but your average beet will take about 20-30 minutes in the glowing hot embers. (These are great to throw in at the beginning if you’re grilling more than one thing.) Once you can easily pierce them with a fork, pull them out and let them rest for at least ten minutes before slicing to reveal smoky, sweet flesh. Some opt to peel off the skin, but I think the sweetened, charred exterior is the best part.

Corn on the cob (in the husk)

Speaking of vegetables that are hard to mess up: Cooking your corn in the husk protects each kernel from charing too quickly and provides a barrier to give them a natural steam bath. The result is an especially sweet, smoky corn on the cob. 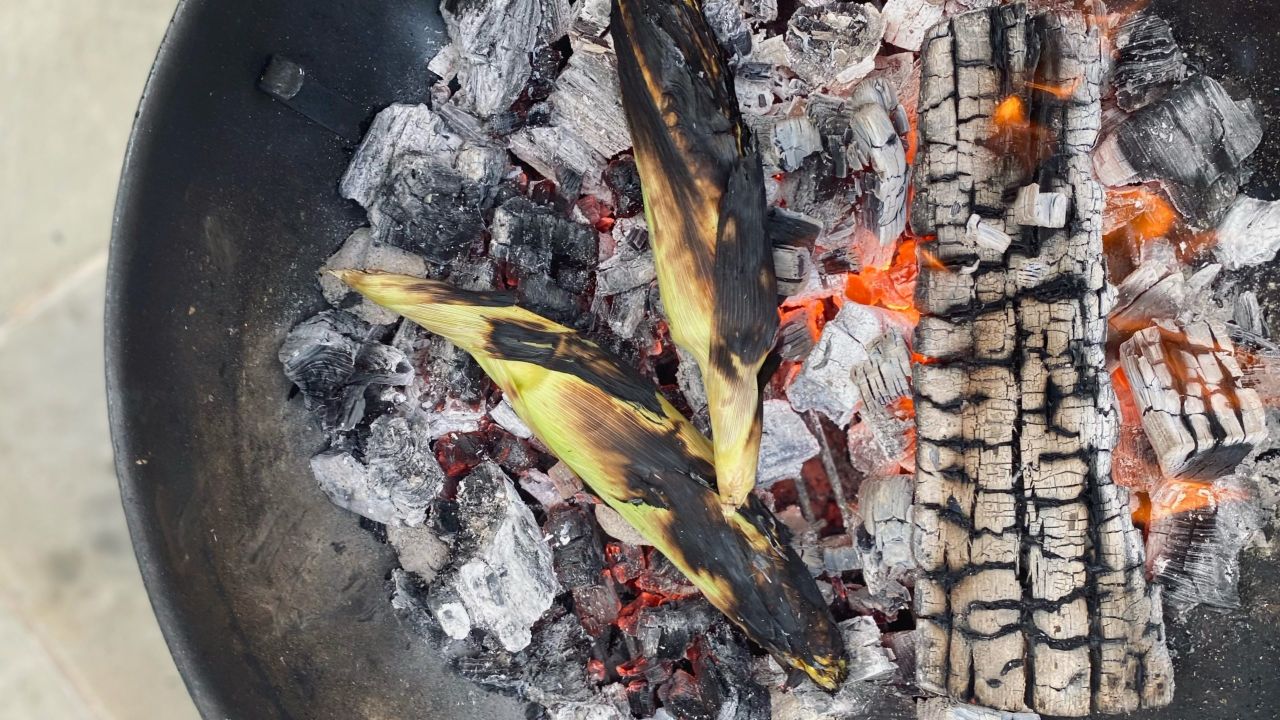 To make sure your husks don’t burn too quickly, and to provide additional moisture for steaming, give them a nice soak beforehand and trim off any excess silk. Lay them evenly across the coals, rotating often until all sides are evenly charred. If you want the kernels themselves to get a nice char, you can even leave them on long enough that the husks start to burn away. Rest for ten minutes (the corn will continue to steam even out of the fire) and peel back the husks for perfect, coal-steamed corn.

The high heat of these embers will deeply intensify the inherent sweetness in your peppers. Lay them along the embers and turn them often. These will cook quickly, so keep an eye on them. Once they’re evenly blackened and the skin begins to blister, pull them, and let them rest. Remove the skin if you’ll be eating the flesh in salads, sauces, and stews, or leave some of the skin on if you’re going to blend them into fire-roasted salsa.

Leeks are often the misunderstood stepchild of the onion family. I was one of those people who refused to cook with them — until I ember-roasted them. Now I realise I’d just never eaten properly cooked leeks before.

Leeks are infamously dirty, but the goal here is to keep them whole so the outer layers can get the brunt of the char while the insides steam. To clean them without slicing them up, just trim off the excess root, wash off the outer layer of dirt and sand, and then made an incision lengthwise through the top third of the leek. Soak the leeks in water for 20-30 minutes, which will help any additional dirt that might be on the inside fall to the bottom.

Leeks cook very similarly to corn in the husk, so feel free to chuck them in at the same time. Just like corn, soak your leeks beforehand to keep them from drying out. Arrange them on the hot embers, turning often, until they are blackened all over and begin to warp — a tell-tale sign that the tender heart is just the way we want it. Pull them out of the grill and let them rest, wrapped in foil or newspaper, for 10-20 minutes. After they’re fully steamed, trim off the roots, peel off the charred exterior, and cut them lengthwise to get to the buttery inner flesh.

Another easy entry point for coal roasting is cooking whole potatoes. Wrap them in foil with some salt, pepper, and butter or olive oil, or simply throw them in naked and rotate every five minutes or so until they can be easily pierced with a fork or skewer. Of all of the food I’ve chucked in the fire, potatoes take the longest. If you’re working with glowing hot embers, these will take about 35-45 minutes. For a slower roast, wait until the embers have broken down even further into ash and leave them in, rotating often, for an hour to an hour and a half. Let them cool before slicing into the fluffy innards. 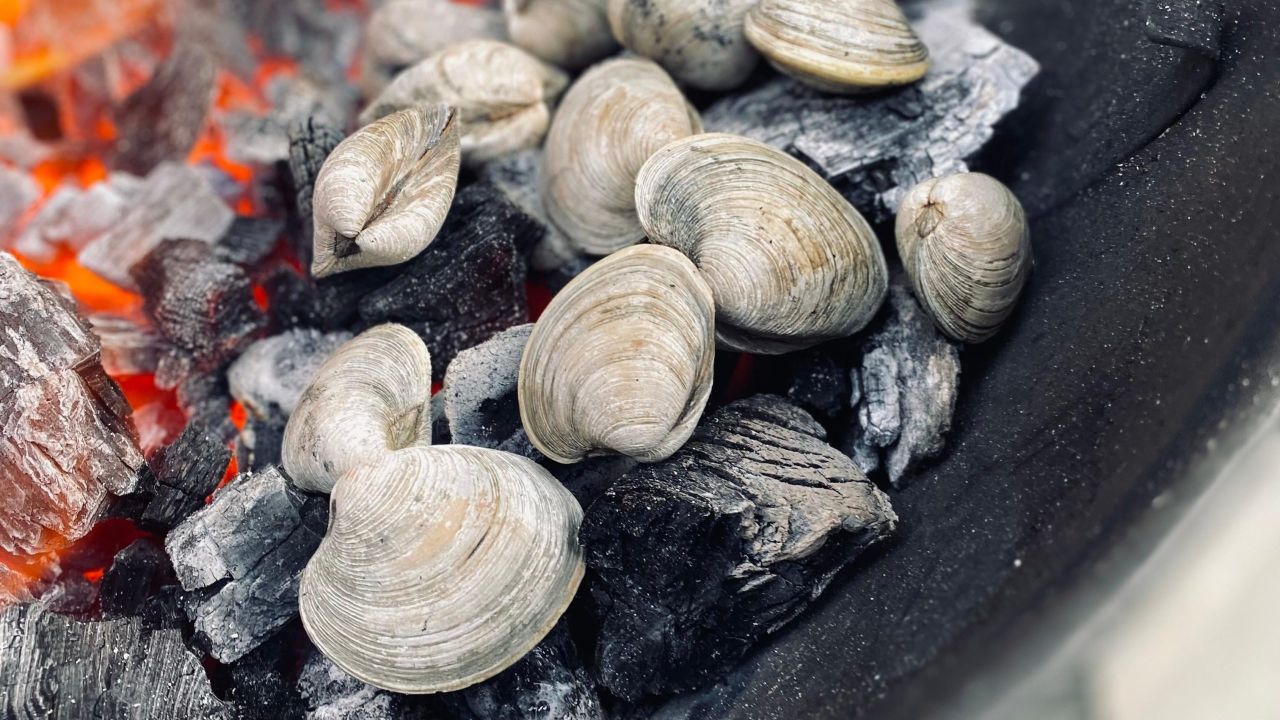 Clams could actually be the easiest thing to cook on the coals because they literally open their mouths to tell you when they’re done. Rake your embers out evenly and lay the clams out among the coals. Don’t be afraid if they open slightly and froth at the mouth a bit, but try not to let too much of the brine drip out. They’re not done until they pop fully open. If any clams refuse to open, you’re working with a dead clam. Don’t eat that clam.

Remove and serve immediately with your favourite sauce poured over them, or eat them straight out of the shell to taste the smoky brine. 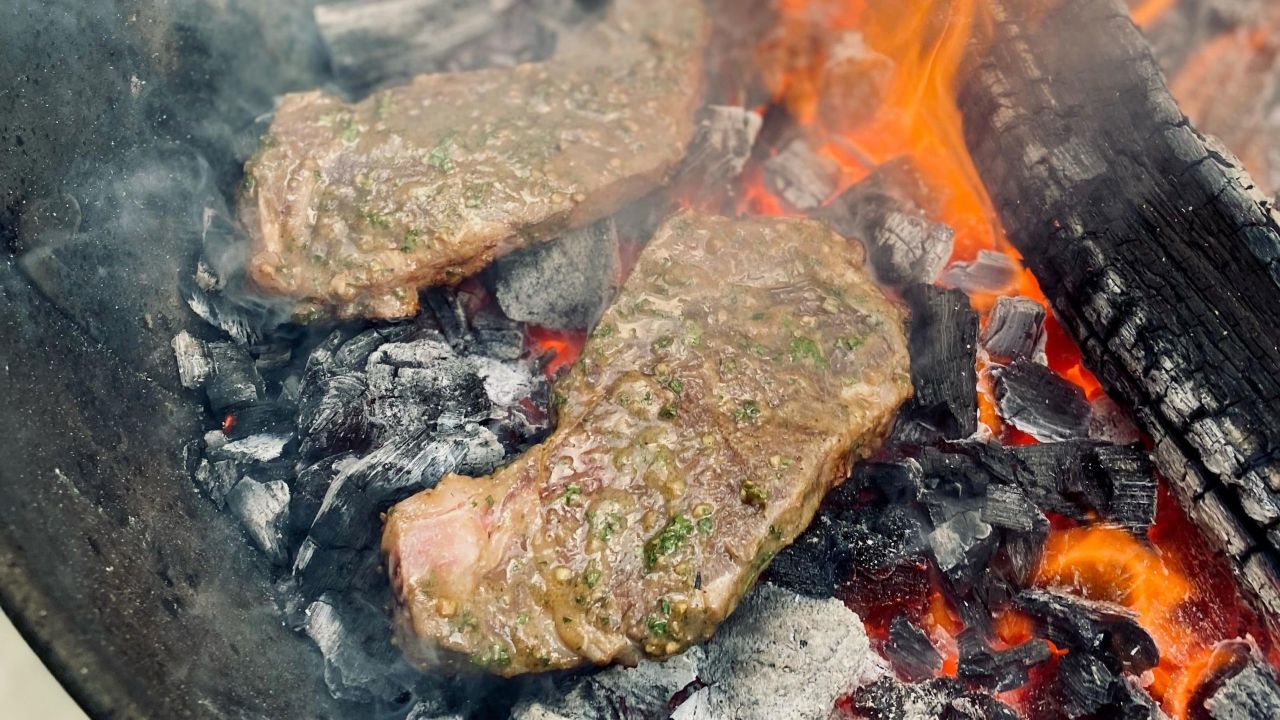 The New York strip steak is the perfect candidate for ember roasting because it doesn’t have nearly as much fat as thicker cuts, so it’s pretty uniform, but don’t be afraid to try it with a porterhouse or ribeye once you get more comfortable. A simple rub or even a marinade will help give this steak a beautiful, protective crust with charred edges. In the same way your steak lifts from a cast iron pan or a grill grate once it’s charred, the same applies to white hot embers. Any embers that stick can be easily brushed off. You might see some flames here and there as the fat renders, but without the airspace in between the meat and the coals, there’s no room for combustion or flare ups.

As for timing, all I can say is that this steak will cook faster than you think. I was going for medium-rare and ended up with a medium steak even with only three minutes on each side, but this all depends on the thickness of your cut and the temperature of your coals. A quick way to measure the temperature without a thermometer is with the hand test. Place your hand 12 inches over the coals. If you can keep your hand there for 2-4 seconds, you’re likely working with 200C heat, but bear in mind that with this style of cooking, your grill can get upwards of 800C. With the hand test, I lasted about a second and my temperature gauge was reading it at 400C . With this kind of heat, two and a half minutes on each side should get you to medium rare, but the best way to tell is to use an instant-read thermometer and aim for an internal temperature of 50-55C. As always, let it rest ten minutes before slicing into the crust to reveal the beautiful, evenly cooked interior.