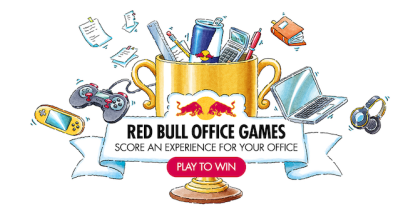 This article is sponsored by Red Bull.

Doing things is hard, especially when they’re not necessarily the things you want to be doing, or if there’s a pandemic raging outside and there’s grim news to be glued to. But there are plenty of ways to push past your procrastination and get into rest time, you just have to find the one that works for you.

Sure, making more to-do lists within your to-do list is a form of procrastination unto itself, but sometimes the reason why you’re procrastinating is because you’re just a bit daunted by the mammoth task before you. “Organise big office event” is too much, it’s like being presented with one of those 10-layer burgers that you need to unhinge your jaw to chew on. However, “book conference room”, “order those delicious snacks from that place I like”, and “set table with notebooks and pens” all seem perfectly manageable.

If you have a list of ten things, and they don’t have to be done in that order, and none of them have to be done Right Now, why not just do the task that appeals to you most now and hope that Future You is more motivated? Or, if you know that the morning is your best time for productivity, push through the important task that has to be done first, so then you can do the easier ones later in the day when your motivation has died. If you’re having trouble talking yourself into a task now, just move onto the next one.

Internally, aren’t we all just toddlers who need to be bribed to do basic tasks, or am I projecting again? “If I can tick two more things off this list, I can have a Red Bull before I tackle the rest of the list” is much more motivating than, “If I do two more things on this list then there are just five more things on the list”. Another option is, “If I can finish my list by 5pm, I can have time to play an hour of video games before I need to cook dinner”.

The trick, of course, is not talking yourself into having the treat early, because no one knows your weaknesses like you do.

If you have friends at work, and they’re also putting off their to-do list, why not work through your lists together, or make a race out of certain tasks? There are few things so motivating as the prospect of crushing defeat, and competition can be fun if not taken too far. Plus, there’s something about being accountable to another person you can see, and talk to, and discuss your issues with that gets you back on track faster in almost any task.

Productivity has reached insane levels and we’re all working harder than ever, maybe you’re procrastinating because you’re just feeling a little burnt out. That’s ok. Why not take a walk around the block, or set up a fun office competition with your co-workers to hit two birds with one stone by taking a break, and bringing your team closer together?

If you head to the Red Bull Office Games site, you can play games with your team and win some great prizes for the whole office. It’s a break, reward, and productive use of time all in one.