Here’s a quirky one. If you play games on Android 11, you might have noticed that two bars from your phone’s regular UI can get in the way: navigation and status. These thin little lines appear on top of your gameplay, which can make it impossible to view or tap essential parts of whatever it is you’re trying to play. For example:

@retro_bowl – I updated to Android 11 and the Retro Bowl beta around same time. Intermittently, I get either the Android navigation bar appearing (right side in photo) or, the notifications bar appearing, which ends up covering score, clock, and D&D. pic.twitter.com/2OWUql8WAD

@madebygoogle is there a way to get rid of this grey bar on landscape mode for full screen games? Seems to be a Android 11 bug. It cuts off part of the screen. This is on my pixel 3 pic.twitter.com/Oh3KM4xKtI 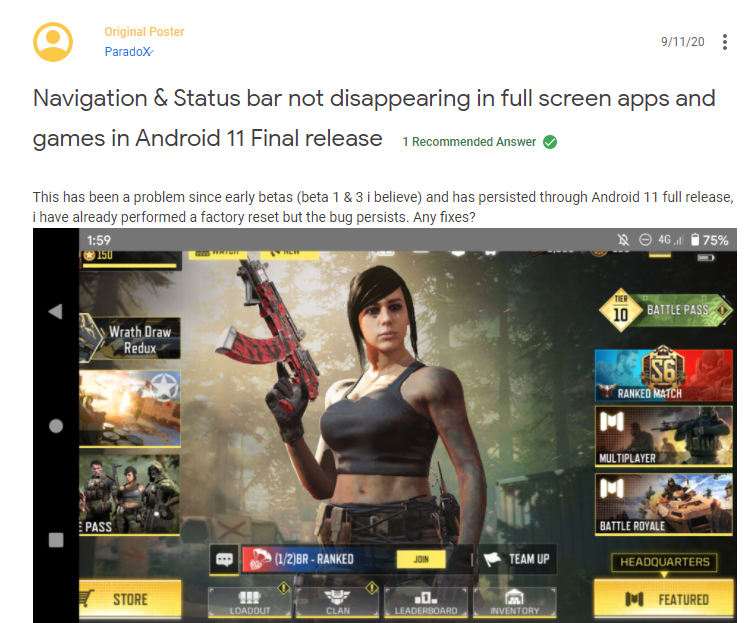 As one Google forum user writes:

Users have been reporting this problem to Google since September, but the company appears to have been giving a bit of a runaround for answers. In some cases, Google representatives have indicated they’ve been unable to replicate the bug, which seems strange given how many other users have complained about its existence.

Android Police notes that the issue isn’t just plaguing Pixels, too. Devices beta-testing Samsung’s One UI 3.0 also appear affected. This makes it sound like a pretty obvious Android 11 bug more than anything else, and hopefully Google has a fix on the way soon — otherwise, it’s a pretty annoying situation to encounter when you’re trying to relax with a quick game.

Do not try to fix your Android 11 smartphone yourself

I’ve also read plenty of reports of Android 11 users trying to address this problem using all sorts of conventional troubleshooting techniques. That includes attempting to roll back the Android 11 update — a complicated process that requires an unlocked bootloader, an older version of the operating system, and a bit of know-how so you don’t wreck your device when attempting to flash it.

I’ve also seen users try the typically tried-and-true technique of factory-resetting their phones. If you restore from a backup, you’ll at least have saved yourself a little time reverting your device. But if you instead opt to start from scratch, you’ll spend a lot of time resetting your phone and re-downloading all your apps, only to find that your efforts haven’t eliminated said bug.

Yes, there appears to be no universal fix for the UI-blocking bug so far. Instead, I recommend putting your phone in Do Not Disturb mode and taking care to not jumping out of the game for any reason. Don’t check other apps. Resist the urge to pull down the Notification Panel, which could trigger the UI issues.

If you’ve launched your game and it doesn’t have any annoying bars covering it, keep playing the game and don’t do anything else. This limits your multitasking, I’ll admit, but at least you’ll be able to get through your game. If this doesn’t work, however, you might just have to try your luck with other mobile games while you wait for for Google’s fix — perhaps another one won’t be similarly affected.