What It’s Like To Fly During The Coronavirus Outbreak

Last Wednesday I travelled from San Francisco to the Maldives with a connection in Switzerland, a journey I returned home from this morning with a connection last night through Singapore. It was a trip I wasn’t entirely sure was going to happen. A few days before my flight my original departure was cancelled because it had a connection in South Korea, which is currently dealing with a pretty substantial number of confirmed COVID-19 cases.

Last week, confirmed coronavirus cases seemed to be limited to just a few areas, so travelling, as long as it wasn’t through one of those areas, still seemed like a safe idea. I ended up being able to take a different flight, one that took me through Switzerland on my journey there and Singapore on my return trip. That means I’ve been to airports in America, Asia, and Europe within the last week. The way each airport is handling the coronavirus is a bit different, but if you have a trip that you need to take, here’s how the experience went for me.

One of the most noticeable things for me was how easy it was to check-in for my flight. San Francisco’s airport (SFO) is typically not that crowded in the international terminal, but there’s usually at least a line you need to wait in. I was able to check my bag and make it through security in around 10 minutes. I had allowed extra time thinking there would be some sort of extra screening, but as far as I could visibly see, things were operating as normal. 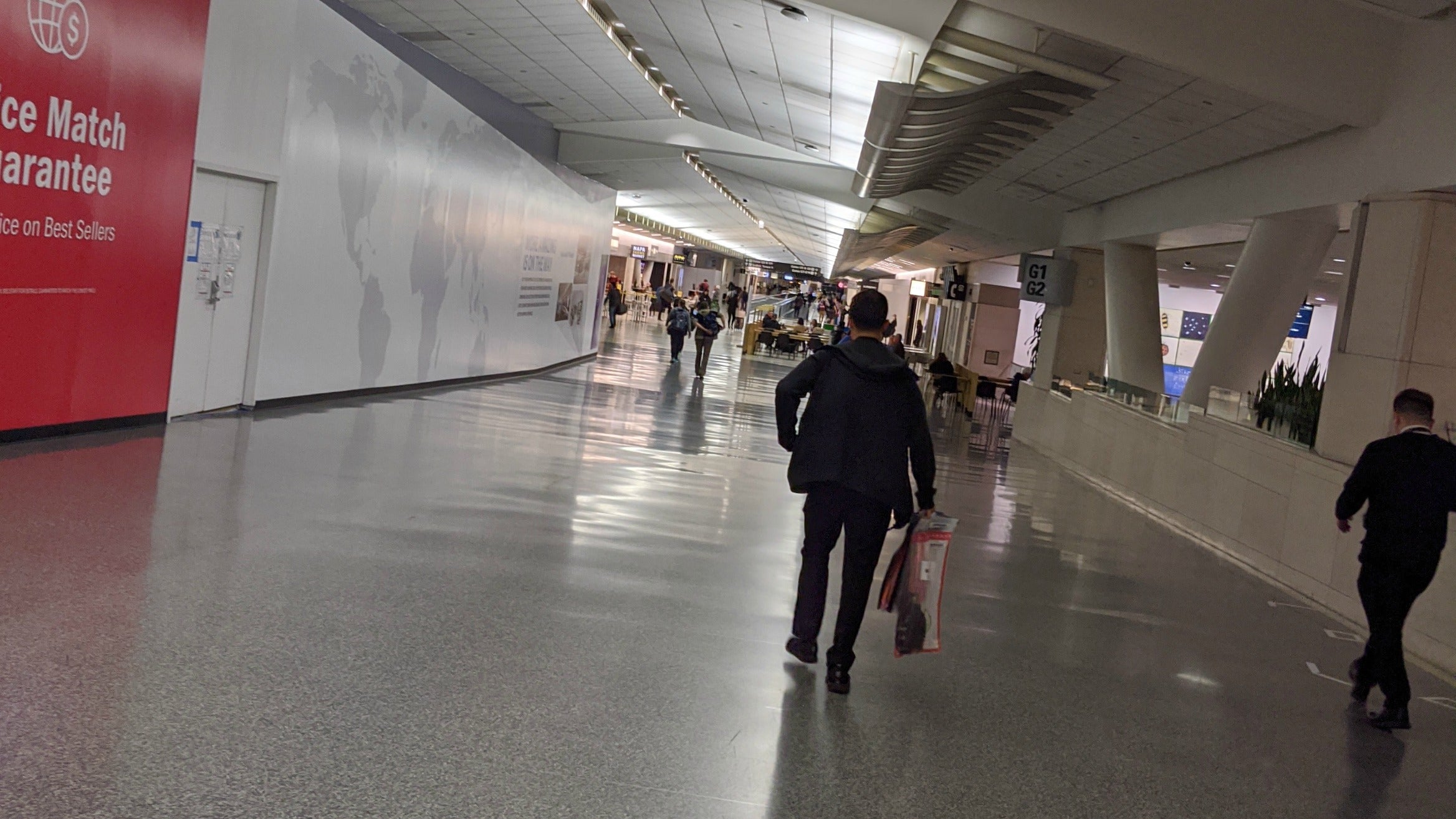 No one asked me if I was experiencing any symptoms or if I had travelled to China at check in; I think they were supposed to. When I tried to board my flight at SFO, and also my next flight after my connection, an alarm sounded and a gate agent asked if I had travelled to China in the past 14 days. It caused me roughly a 45-second delay in getting onboard, and when I said no I was allowed immediately on the flight.

No one else was stopped as we were boarding, so I’m guessing, in this case, the agent that checked me in was supposed to ask and forgot to.

My flight, like the airport, was fairly empty. Throughout my time at the airport and on the flight I saw exactly one person wearing a mask, which is honestly low for your average non-coronavirus day at SFO. At this point, March 4, no one seemed too concerned about COVID-19.

The Zurich airport was the first time I really noticed anything really coronavirus-related happening, and even then it was pretty mild. I didn’t see a single mask at the airport; however, the airport had set up a handful of hand sanitiser stations throughout the terminal for people to use and had posted COVID-19 information beside them. I didn’t actually see anyone use those stations, but I did appreciate that they were there. 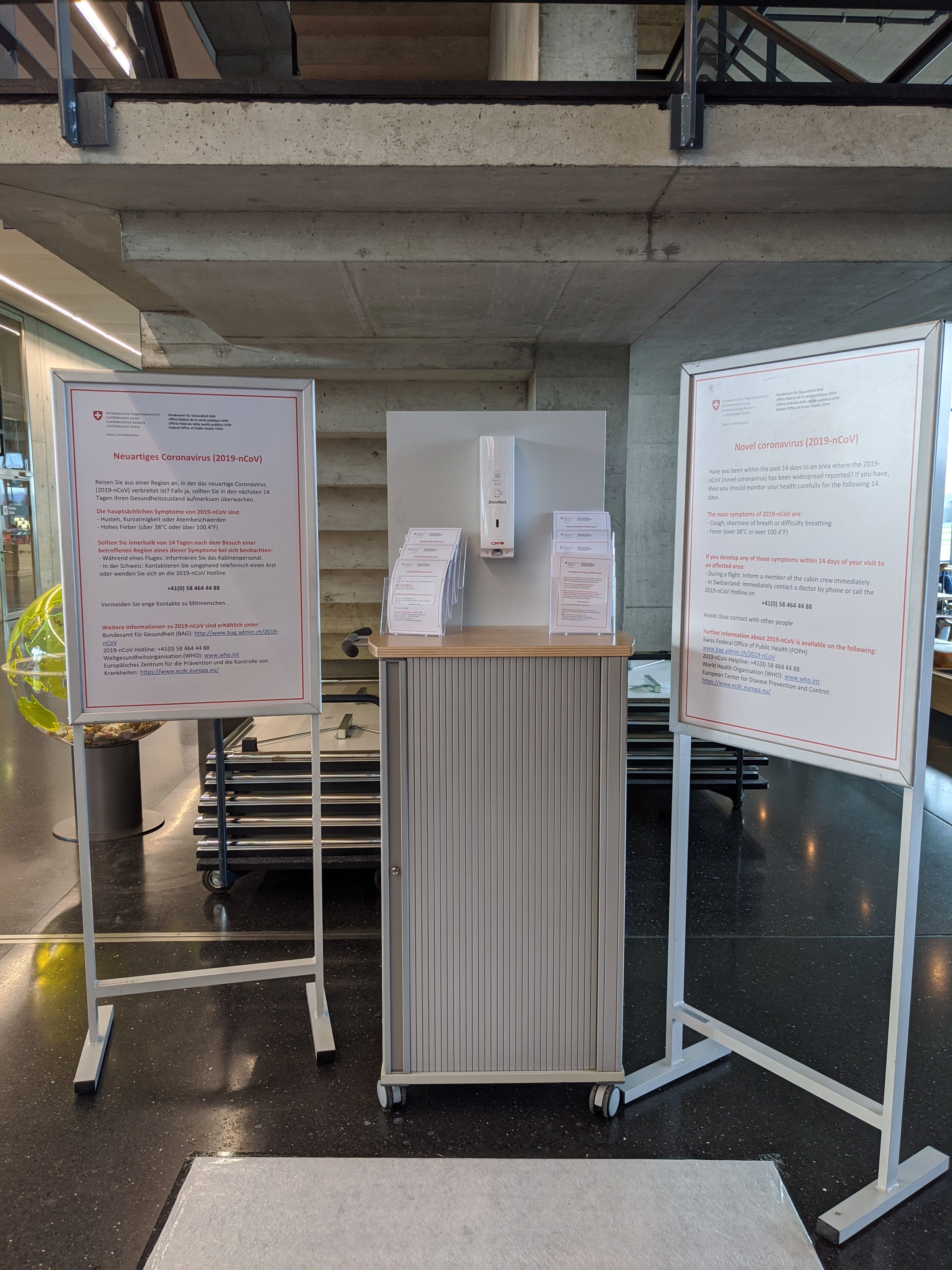 Boarding the plane happened just as it normally does, and again, my flight didn’t have any mask wearers aboard. Beyond setting off that alarm again and being asked if I’d been to China, everything went as I would have expected travelling any other time

Arrival in the Maldives

Customs in the Maldives were a bit cautious. Rather than being allowed to go straight into the customs line, I had to go through a separate “health check” line. From what I can tell, the health check was simply three separate people looking into your eyes and a walk through a temperature scanner. If you were a glasses wearer, you had to remove them for this to happen. I’m not exactly sure what they were looking for, but they were looking at everyone fairly closely.

When I filled out my customs form on the plane I was also given a “Health Declaration Card” where I had to share my flight number and seat as well as information about whether or not I was experiencing any symptoms like a sore throat or cough and whether or not I had lived or visited China in the past 14 days. 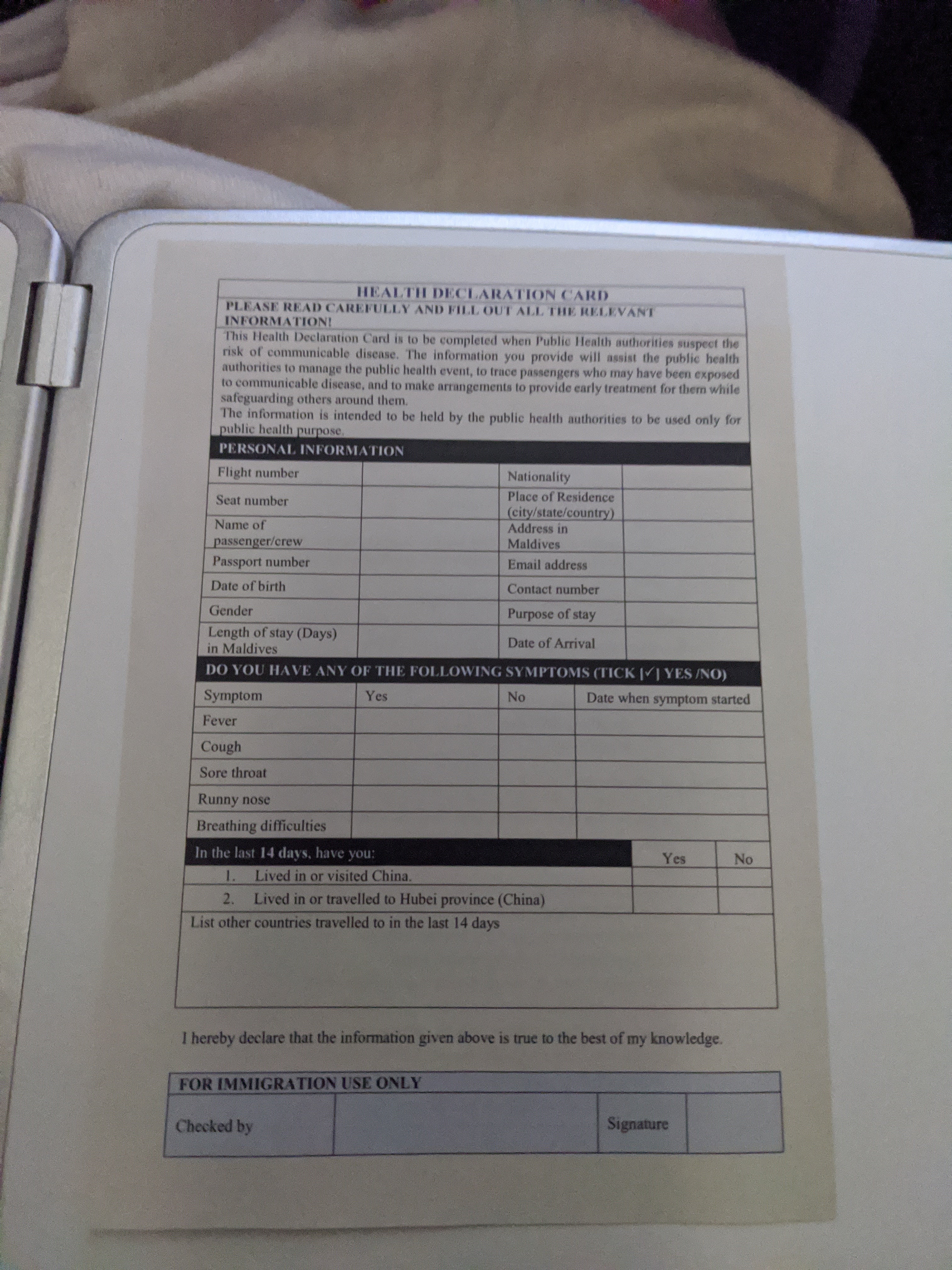 On the back of the form was information about what to do and who to contact should I have any symptoms while I was there. While basic, I thought it was helpful, and in theory set you up for success if you did get sick there, although they took away the piece of paper with that number on it the second you went through customs.

The Maldives was a lot less concerned about me departing than they were my arrival. Much like my San Francisco departure, I was able to check my bag and get through security fairly quickly. There were a LOT more people wearing masks at this point.

I waited in the lounge prior to the flight thinking that would save me from coming into contact with too many people. I think a lot of people had the same idea, and it was relatively packed. A solid 90% of the hundred or so people in the room were also wearing masks. The same for my flight. While it was definitely not packed, almost the entire flight seemed to be wearing masks aboard.

Worth noting: the day I left was the same day a number of reports in the Maldives were quarantined, so while the airport isn’t wasn’t on super high alert, it was understandable that a lot of passengers were.

Singapore had manned temperature scanners scattered throughout the airport. During my journey from the gate where I landed to another terminal where my new one was I walked through several. The display for the scanners shows a split-screen where video is on the right, and a heat map of people walking through is on the left. 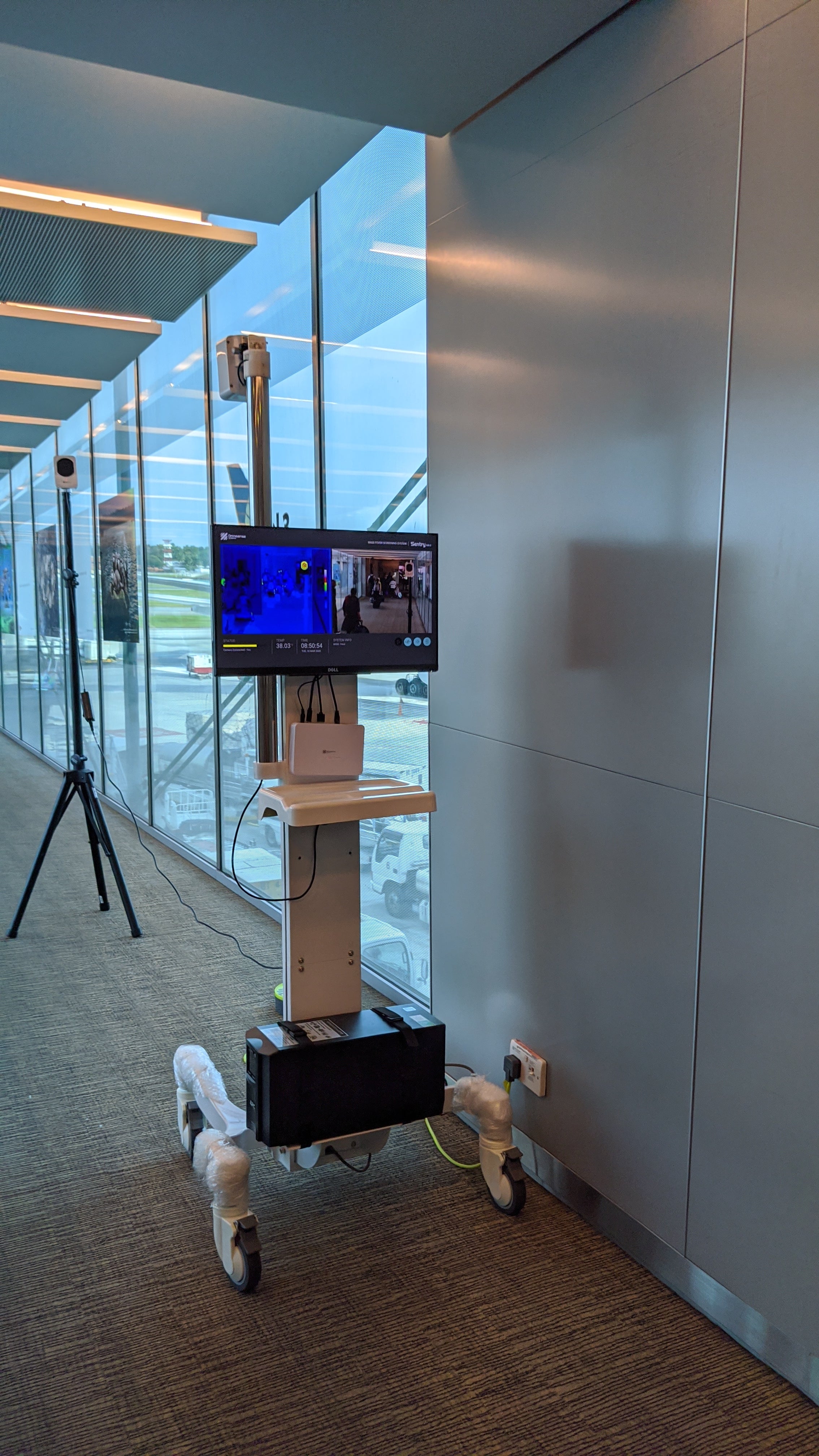 If you have to go through one of these, it’s really no different than just walking down the hallway. I didn’t have to talk to anyone or even slow down.

When it came time to board my flight, I was also asked whether or not I had travelled to China, Iran, or Italy over the past 2 weeks prior to being allowed to board.

I expected Singapore’s airport to have a larger mask presence and stricter screening stations, but beyond the extremely non-invasive temperature scanners, there wasn’t anything out of the ordinary

My flight to San Francisco from Singapore was the first leg of my flight where all of the staff were wearing masks.

Similar to my departure, customs at SFO was emptier than usual. Anecdotally, the majority of times it’s crowded when I’ve returned is due to large amounts of visitors, typically from Asia, flying in to board cruise ships. I’m personally accounting the sharp decline to people both not being able to travel due to cancelled flights and to the current lack of interest in being trapped on a cruise ship.

I had Global Entry, so my interaction with customs officials at SFO involved handing over the slip of paper that prints out from the kiosk. Once I picked up my bag, I was routed a bit differently than normal through a side door where there were what appeared to be temperature scanners. 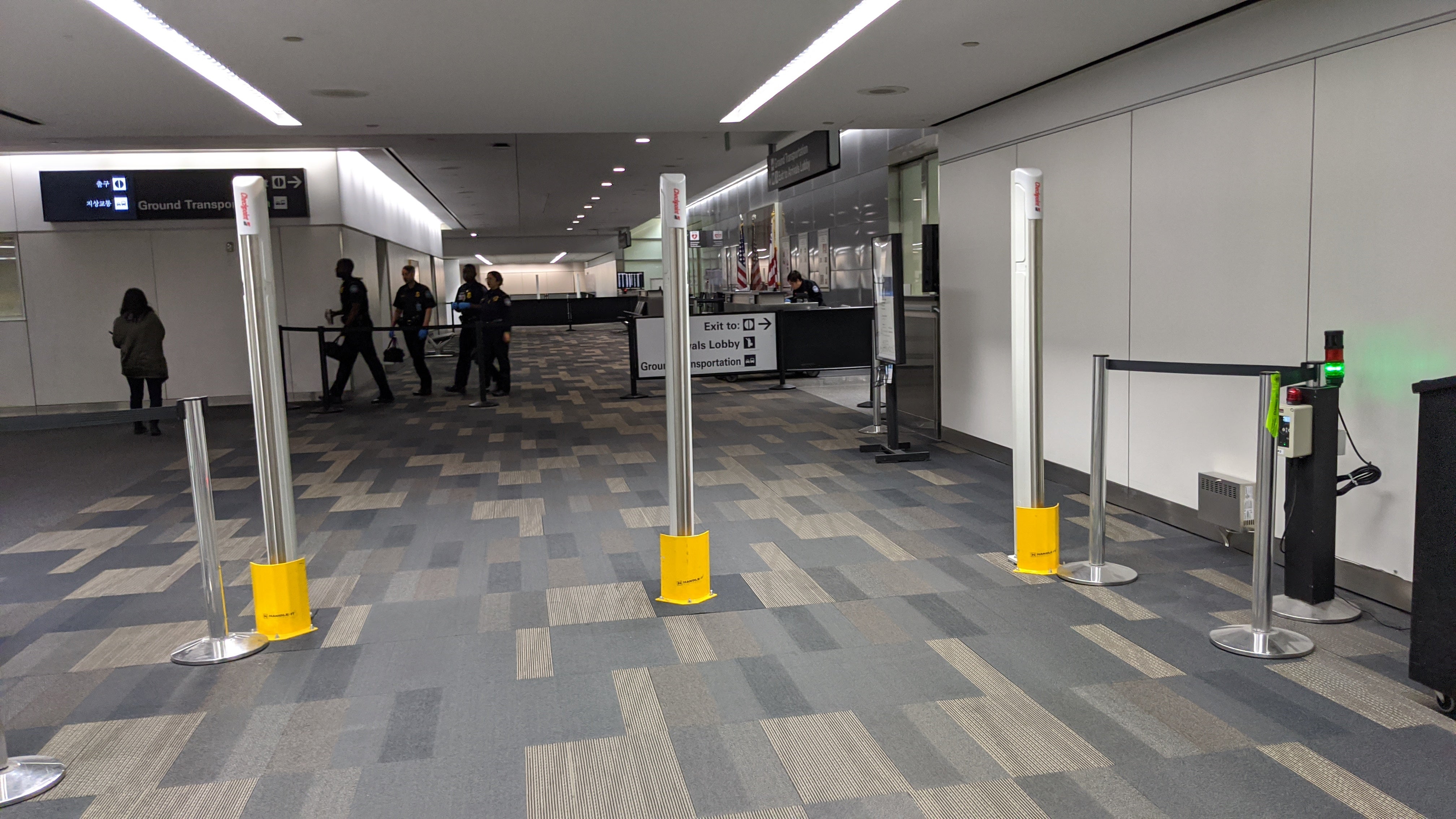 I didn’t see anyone actually monitoring those scanners like they were in other airports, but they certainly could have been someone watching them remotely. The CDC also had this “Health Alert” on the screen at Baggage Claim. 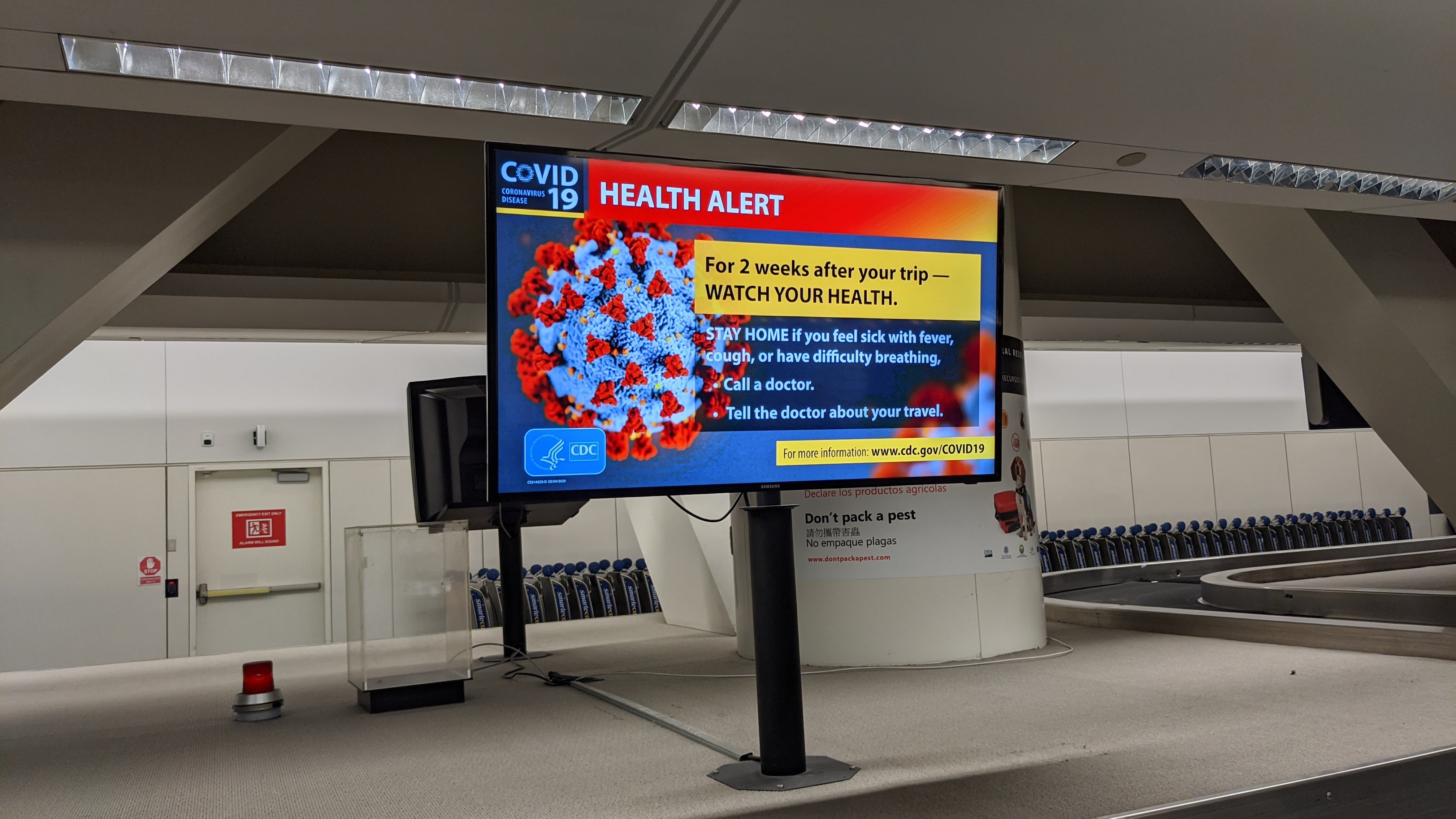 During a flight back from the Virgin Islands two weeks ago a travel companion of mine was actually stopped at customs on the island and asked about his travel due to coronavirus. I had expected a bit more fanfare this time, or at least a speed bump or two in the Global Entry process, but it was actually faster than normal.

Travelling was a bit of a mixed bag as far as how each airport and country is handling the virus, but never involved anything I would have considered a hassle, or even anything that slowed down my journey to a noticeable degree. There’s also been a pretty big increase in concern over the past week in airports, just as there has been in cities around the world. If I was leaving today for the same journey I might make different decisions.

I made a point to wipe down my seat area on every flight I went on; however, that’s a practice I already do. I will say that while normally those wipes end up being a bit dirty, my seats for all my flights appeared, from a wipe standpoint, to be very clean.

I chose to not wear a mask in the airports but did for my 16-hour flight to San Francisco from Singapore, simply because I was going to be asleep, likely with my mouth open, for a long period of time. I was happy I had one, but the flight was so empty that I think I would have been comfortable without it as well.

There’s also no way of knowing if I actually contracted anything during my journey. While I think everything went fine, I could certainly be wrong. I work from home, so I plan to self-quarantine myself for the most part for the next 14 days in case I did manage to pick up the virus along the way. As for whether or not that’s something I need to do, ask me in 14 days.