What You Need To Know About US Airports’ Facial Recognition

A few months ago during a layover in Atlanta, I came across an unusual sight: facial recognition being used in the boarding process.

The technology, which is currently in beta testing for international Delta flights leaving the airport, replaces a gate agent physically checking your passport before you board in the United States. While this technology is only undergoing a limited trial, it has the potential to be installed in airports around the world.

When it comes time for you to get on the plane you’ll stand on a circle, look at the camera, and then wait for a green light indicating that the tech has determined that you are who you say you are and are supposed to be on the flight. A gate agent will give you a thumbs up, and you’ll take a receipt from the machine and board your plane. 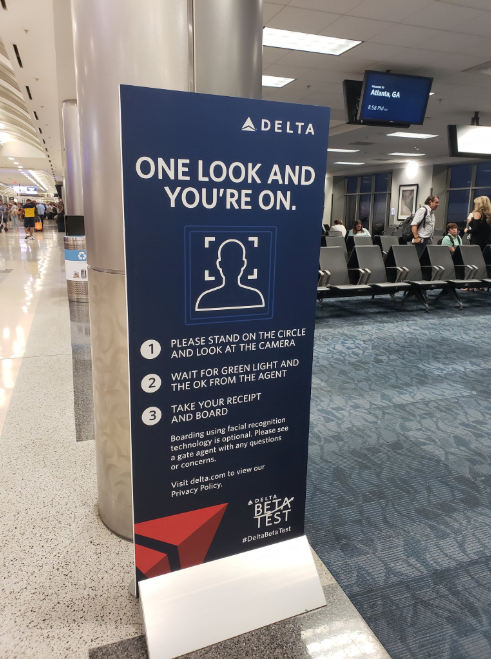 That means in this case, your face is your boarding pass. You don’t need to pull out a ticket or your passport again to get on board, just look at the camera.

Beyond the actual boarding process, the scanners also come into play when you check in as well as with TSA at security, provided you’re travelling on one of the beta-tested flights. The Points Guy gave the service a try during one of its first runs late last year.

Ultimately, the idea is that facial recognition might replace that interaction with the TSA altogether.

While the tech might things faster, it also involves allowing a government agency to scan your face, something you may or may not be OK with. And if you’re not OK with it, it’s important to know you have options.

The sign advertising the tech beside the gate I saw noted that the use of the technology is optional and suggests seeing a gate agent if you have questions or concerns about the process. It turns out, the information about it being voluntary might not be as obvious to others.

This week Wired posted a story from a reporter that opted out of the service in Detroit. In her case, she found out about the feature at the gate rather than at check-in since she started her journey at another airport. While the sign was front and centre for me, it wasn’t in her case.

That makes this a simple case of knowing your rights and knowing you have options while travelling in the United States. Pay attention when you check in for an international flight to make sure your flight isn’t one using biometric scanning (you’ll be asked to opt-in at check-in), and if you do see it happening at your gate and you’re not interested, tell a gate agent you’d rather do things the old fashioned way.