A strange iOS bug is eating up mobile data and spiking monthly bills for iPhone users. You might not be affected, but it’s worth checking out (just in case).

The bug has been reported on all iPhone models that run iOS 13, and it affects nearly every major cell provider. Some users are only seeing a few kilobytes of their data plan affected, while others have reported losing several gigs of data to the bug. Either way, that’s eating up your data plan; even if you’re on an unlimited plan, you can be subject to service throttling if your phone turns into a complete hog.

You can check if your iPhone is affected by going to Settings > Cellular, and scrolling down to the Cellular Data section. Check the list for the phrase “Uninstalled Apps.” The number should be pretty large, I’m assuming. That’s normal. Scroll down a ton and tap on “Reset Statistics.” Now, give it a few days, and check this number again—if your “Uninstalled Apps” is skyrocketing to the top of your data-use chart, and you haven’t deleted any apps in the meantime, you’ve got a problem. 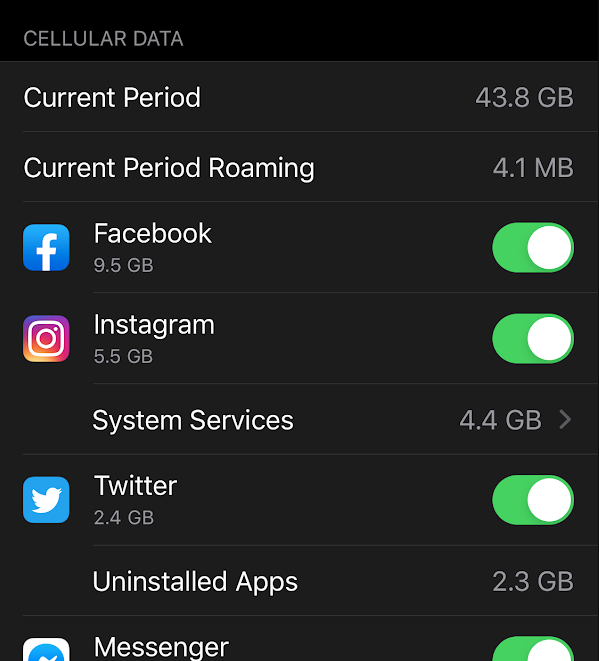 Unfortunately, there’s no way to fix this bug save for downgrading to iOS 12, which you can’t do. On the bright side, Apple has acknowledged the bug and says it’s working on a fix—though we don’t know when it will show up.

I’ve seen suggestions that users stop using their iPhones entirely, but you should probably reach out to your service provider and explain the issue first, then report the bug to Apple directly. Even though there’s no patch yet, you’ll probably get better advice than “abandon your iPhone,” and may be able to resolve account-related issues caused by the data-munching menace. That said, it is possible you may have to limit using your iPhone (or swap to a different device if you have one) until Apple solves this problem.

If all else fails, then I guess you can go ahead and seal your phone in a Faraday bag and chuck it into the ocean and buy an Android instead. We kid. (Somewhat.)