The Difference Between Mirrorless Cameras And DSLRs

If you’ve been looking to buy a camera recently, you might have seen a new type altogether. They’re called mirrorless and while they’ve been available for years, they’re finally coming for the DSLRs market share. But given they’re pretty pricey in most cases compared to entry-level DSLRs, what makes them different and which one is better value? Here’s a quick breakdown of the key differences between the two.

One of the major differences between the reliable DSLR and the mirrorless camera is how they work. You first need to understand how they work because it informs how they’re different in other ways.

First up, the DSLR is essentially a digital evolution of the 35mm film camera, which was popular before the 90s and has had a 21st century resurgence. This is because it’s based on the same concept, just replacing physical film with a digital image. Canon provides an excellent diagram highlighting the differences but to go into a bit of detail, an image seen through the lens is reflected onto two mirrors so that the photographer can see, with your bare eyes, what’s actually going to be in the image. A mirrorless camera removes these mirrors and replaces it with a sensor so the image display you’re seeing is a preview of what it should look like. 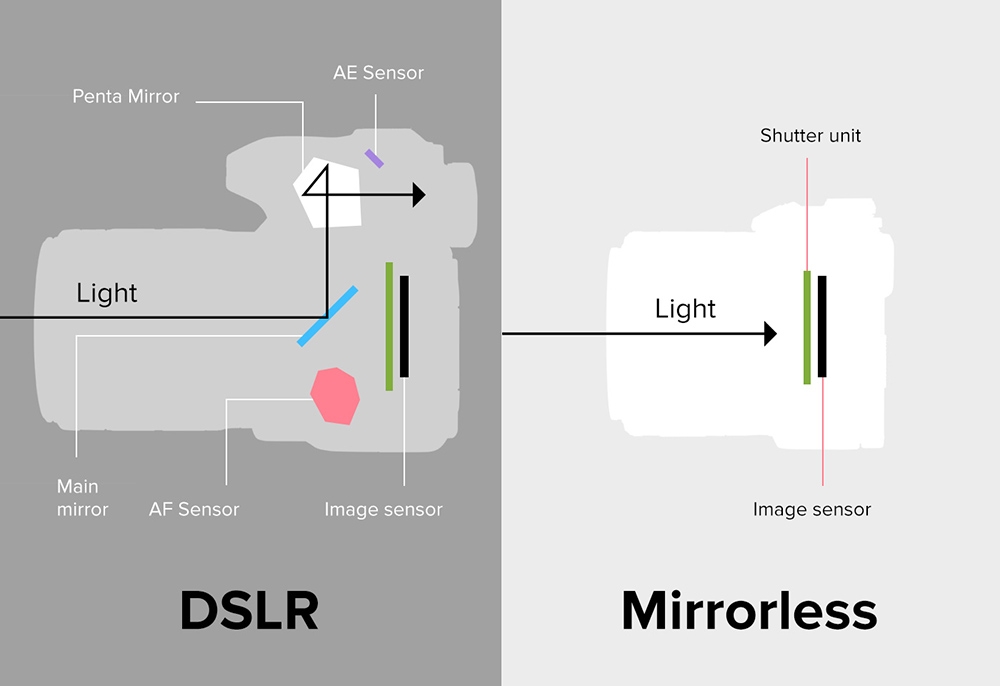 Despite cutting out a key aspect of the camera, a mirrorless camera surprisingly doesn’t skimp on image quality. DSLRs and mirrorless cameras come with similar sensors and image processors so they’re both able to capture high quality images in all sorts of situations. In terms of video, however, it’s the higher-end mirrorless options that have been leading the pack. Mirrorless options come with a feature called phase detection, DSLRs also have this, and this offers a ‘faster’ display that helps with tracking moving subjects. This is because every pixel acts as a phase detection sensor, according to Canon, which helps it reduce the time it takes to focus the correct part of the subject.

Additionally, many entry-level DSLRs come with 720p HD video recording rather than full HD. This is because, at the lower prices, DSLRs still favour still-image capturing over video recording so if they do come with it, it’ll skimp out on other key features like an AUX in for microphone attachments — a crucial feature if you want quality audio with your videos.

The major variation is actually how the images display before they’re taken. Because the mirrorless camera has no mirror, it needs to estimate what the image will look like in the same way an optical viewfinder would. Usually, it has no problems but in low-light conditions, the screen does struggle to ‘see’ what’s there because it needs more time to filter in as much time as it can. In these situations, the DSLR remains superior because you’re given the image display as well as the optical viewfinder, which is relaying the exact image.

Getting rid of the mirrors means the mirrorless camera is much more compact than the bulky DSLR. This means you can fit a mirrorless camera in a handbag or chuck it in your desk drawer with no real complaint. DSLRs have definitely gotten smaller over the years but their size and weight cannot be compared to their smaller counterparts. Given that the image quality doesn’t vary too drastically, this will likely be a key point of difference for some who are looking to pack a camera and a few lenses in their day pack or suitcases without weighing it down.

With mirrorless cameras being the newer kids on the block, there are far less lenses available each model over most DSLRs. If you love changing lenses depending on the situation, you still definitely have that option with a mirrorless but the DSLR’s advantage is that it’s been around for longer so manufacturers, like Tamron, have been able to offer a number of options for cheaper prices.

The reality is, with the rise in mirrorless camera sales, manufacturers will begin to produce more options bringing the costs down but for now, it’s a pricey endeavour.

Additionally, while it’s improving, you might not be able to find as many bargain bin accessories for mirrorless cameras. Optional extras like replacement lens caps, lens filters and camera and battery grips do exist for many popular mirrorless models but it might be hard to find companies outside of the camera’s brand that offer compatible items.

The final point to help people determine which model is for them is likely the cost. The technology needed to get rid of the mirrors means the mirrorless camera is a bit more expensive than your entry-level DSLR body. Pair that with the limited availability of lenses and accessories and you’re looking at a higher cost overall until cheaper options flood the market.

To give you an idea of the entry prices for mirrorless options, the Fujifilm X-A5 Series is valued around $747, the Canon EOS M100 is $599 and the older Sony A5100 comes in at $642.95. To be fair, these aren’t too different in cost compared to entry-level DSLRs.

So, which one should I buy?

At the end of the day, both options are going to give you a camera capable of capturing high quality images with the ability to customise settings and accessories. The key differences in size, pricing and lens availability is what really sets them apart but if you’re able to head to a store and have a play around with one and it suits you well, anything will likely do.

Unless you’re a professional photographer, most of us are just using these cameras for hobbies and travel pictures so whatever takes a great shot and doesn’t weigh five kilograms will do the job just fine.

The Best Cameras Under $1000 (Compact, DSLR, Mirrorless And Action Cams)

Smartphone cameras keep getting better and better but if you really want to kick your photography up a few levels, they can only take you so far. If you're a little green when it comes to photography, it can be hard to know where to start looking so you don't want to splurge on your first big camera purchase and slap down a few grand for something you might not even use (or know how to use!). Whether you’re after a mirrorless camera, DSLRs, action cameras or even a point-and-shoot, we’ve got you covered with our round up of some of the best cameras you can buy for under $1000.