Australia’s economy is facing a tough time right now and its central bank, Reserve Bank of Australia (RBA), is considering a number of new policies to get it back up and running. One idea in particular is raising eyebrows. It’s called ‘quantitative easing’ and it’s something that has never happened in Australia before. In layman’s terms, it’s when a central bank prints money. Let’s explain what it all means.

Australia Is Inching Closer To A Negative Interest Rate: Here's What That Means

If you haven't heard already, the Australian economy is in a bit of a slump with slowing growth and stagnating wages. The Reserve Bank of Australia (RBA) is considering bold strategies to help alleviate the worsening situation - and it might result in Australians getting paid to borrow money via negative interest rates. It's all a bit confusing so here's what we know.

What has the RBA said?

The RBA, responsible for ensuring Australia’s economy flourishes, has been discussing unconventional strategies to bolster the country’s flailing economy over the last few months. In August, the central bank’s governor, Dr Philip Lowe, told the Standing Committee on Economics it was even considering a number of policies never before trialled in Australia.

“We are prepared to do unconventional things if the circumstances warranted it,” Dr Lowe said. He later doubled down on the claim in an October paper for the Bank for International Settlement (BIS) mentioning negative interest rates and quantitative easing were on the table.

It’s that last part that’s particularly interesting because quantitative easing is often described as the ‘printing of money’ in order to stimulate the economy. With Dr Lowe due to deliver a speech titled ‘Unconventional Monetary Policy: Some Lessons from Overseas’ on 26 November, as spotted by Business Insider Australia, pundits are expecting the bank to further argue for the radical monetary policy.

What is quantitative easing?

Quantitative easing (QE) is a bit of a tricky one to understand if you don’t have a solid grounding in economics. Simply put, it’s when new money is printed by a central bank, like the RBA, which is then put towards the buying of financial securities (like home mortgages or shares) and long-term, fixed-rate government bonds (a loan from the government). The increase in money supply helps to maintain lower interest rates, encourage spending and lift the economy’s spirits.

It’s been deployed in other countries like Japan and England and Dr Lowe points to how those examples were considered effective.

“All four rounds of the BoE’s [Bank of England] QE were regarded as effective in influencing financial markets, albeit to different degrees,” Dr Lowe outlined. “The BoJ [Bank of Japan] programmes have not led to higher inflation expectations despite creating extremely accommodative financial conditions and pushing up actual inflation and GDP to some extent.”

The reality is, however, the RBA can’t actually do this without the government’s support.

“One key lesson is that the tools are most effective when used together with a broader set of policies, like fiscal and prudential measures,” Dr Lowe said in a statement upon his October paper’s release.

And what’s the cash rate?

It all comes down to Australia’s falling cash rate. The RBA sets this rate every month, apart from January, and it affects the rate commercial banks then pass on to each other on overnight loans, very short-term lending between banks to ensure adequate money supply.

The RBA’s cash rate is the benchmark for the country and it affects a number of factors including the rate of inflation, the amount of jobs in the country and ultimately, the state of the economy. The central bank lowers it stimulate the economy and increases it when things are going well to give everyone a bit more of the pie.

“Controlling inflation preserves the value of money and encourages strong and sustainable growth in the economy over the longer term,” RBA’s website reads. 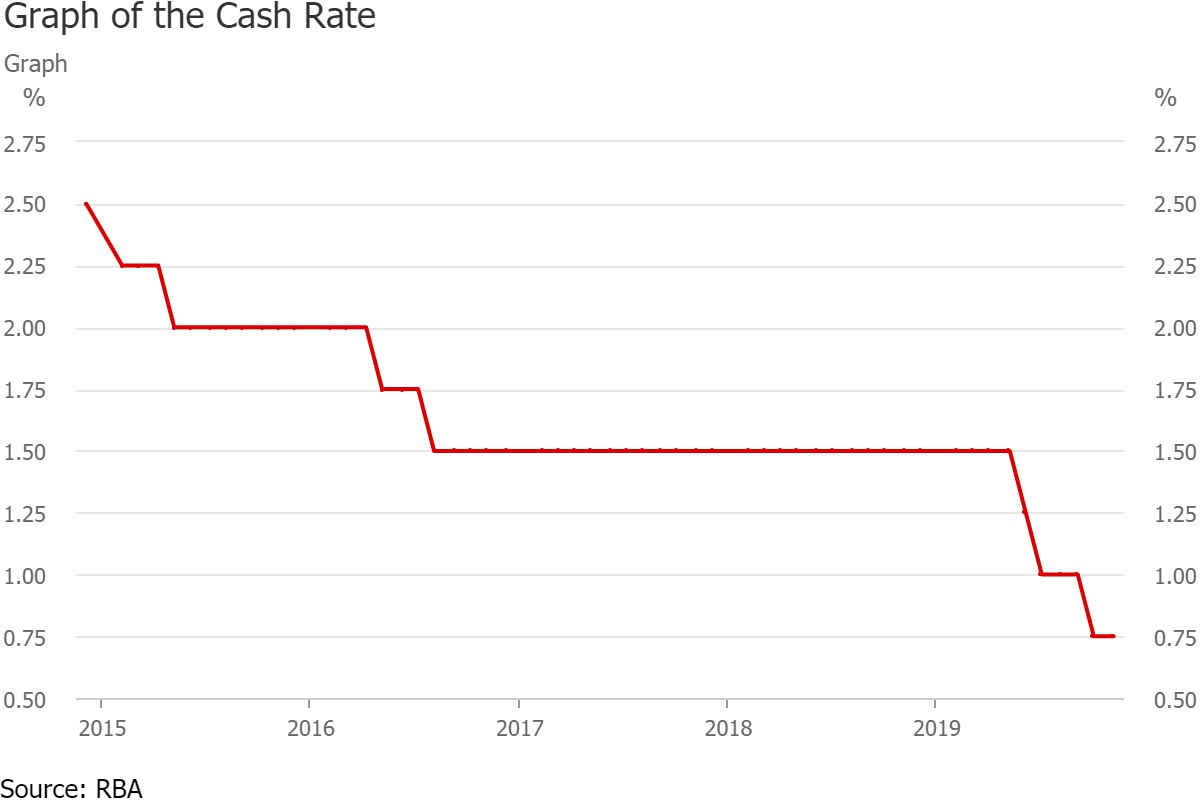 It’s been steadily falling for the past few years and has reached an all-time low of 0.75 per cent at 6 November 2019. If it continues its trend, it will hit zero and the RBA has even considered a negative interest rate as part of its unconventional monetary policy dialogue.

So, what happens for now?

With no actual unorthodox policies being announced, it’s all just speculation for the time being until the RBA makes a move. With the central bank’s cash rate at an all-time low, however, something’s going to need to budge. For now, let’s see what Dr Lowe’s speech outlines for Australia’s near future.

On Tuesday, the Reserve Bank of Australia (RBA) cut the official cash rate to a historic low of 0.75%. It has also admitted that further cuts are on the horizon - which means interest rates of near zero, and beyond. Here's what that means for the Australian economy.