We Know What Was Originally Inside Pulp Fiction’s Briefcase

What’s inside the glowing briefcase in Pulp Fiction? It’s one of the greatest mysteries in cinema. Writer and director Quentin Tarantino has remained deliberately coy on the subject, vowing to never reveal the answer. “It’s whatever the viewer wants it to be,” he once teased.

Except that’s not quite true. The answer is explicitly spelled out in an original screenplay draft. (Spoiler: It has nothing to do with Marsellus Wallace’s soul.)

One of the most widely shared theories was that the briefcase contained Marsellus Wallace’s soul. Apparently, the bumbling stoners gunned down at the beginning of the movie were really demons. Marsellus had sold his soul to the the devil, changed his mind, and sent Vincent Vega and Jules Winnfield to get it back.

As evidence, proponents of this theory point to the heavenly glow emanating from the case, the combination of the lock (‘666’) and the conspicuous band-aid on Marsellus Wallace’s neck. According to the Bible, when the devil steals your soul, he takes it from the back of your head. Or so the theory claimed. 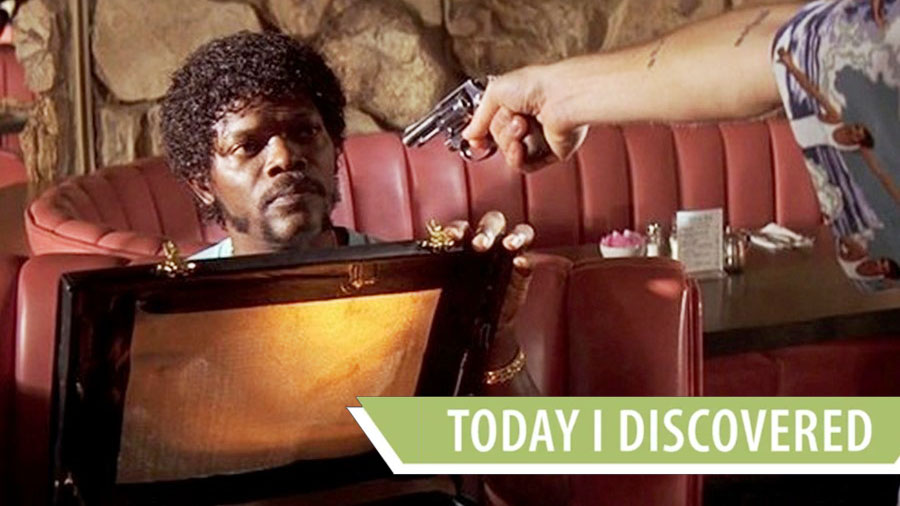 In reality, there is no such passage in the Bible. (Fun fact: Jules’ Ezekiel 25 17 speech isn’t in the Bible either). According to Ving Rhames – who played Marsellus in the movie – the purpose of the band-aid was to cover up a real-life scar that he was self conscious about. The band-aid isn’t mentioned in the script and holds no deeper meaning whatsoever.

Without the soul-through-the-neck element, the whole theory falls apart. So if the suitcase didn’t contain Marsellus Wallace’s soul, what was in it? Other enduring theories include the mobile atomic gadget from Kiss Me Deadly, Elvis’ famous gold suit which also appears in the Tarantino-penned True Romance, bars of solid gold and a stolen Oscar. All of which are wrong.

In a 1997 interview with film critic Roger Ebert, Pulp Fiction‘s co-creator Roger Avary finally revealed the truth. The answer is pretty anti-climactic. Wait for it…

But hang on: diamonds don’t glow. What’s all that about, eh? In the book Pulp Fiction: The Complete Story Of Quentin Tarantino’s Masterpiece, Avary explains what happened:

Originally the briefcase contained diamonds. But that just seemed too boring and predictable. So it was decided that the contents of the briefcase were never to be seen. This way each audience member would fill in the blank with their own ultimate contents. All you were supposed to know was that it was “so beautiful.”

At least, that was the original idea. Then somebody had the bright idea (which I think was a mistake) of putting an orange lightbulb in there. Suddenly what could have been anything became anything supernatural.

So now you know. Personally, we kind of prefer Samuel L Jackcon’s explanation:

“When I looked inside, between scenes… I saw two lights and some batteries.”