If you hate green beans, there’s probably a good reason why. Your green bean experiences likely involved someone absentmindedly opening a can of green beans and throwing them in a saucepan on the stove. Maybe they were french cut (or not), and whoever was cooking threw in a few lardons of bacon (or not). Either way, you ended up with, mushy (possibly bacon-y) sadness.

You also may have tried your hand at fresh-cut green beans lovingly sautéed in butter. You spent hours (possibly days) trimming all those goddamned green beans, threw them in the saucier pan, tossed them, lovingly salted them, maybe even contemplated trying to pull off calling them hericots verts.

But then you tasted them and… more sadness? The outsides – they’re withered and leathery. And yet the insides – somehow they’re still a touch toothy? This is a disaster all around, and you’d be forgiven for questioning whether you know how to cook at all.

It’s OK. You definitely know how to cook.

You just failed to embrace the two, necessary cooking extremes, blanching them, then charring the ever-loving heck out of them.

Think about what you want in a green bean (or any vegetable, really): A flavourful exterior with a bright, tender-crisp inside. That’s hard to achieve in any one-step cooking process, hence doing two.

By blanching them first, you give the insides a head start so that the final charring doesn’t need to do too much work. By charring them, you get the flavours you’re after without relying on a hot pan to finish the insides. It’s admittedly a pain in the arse, but still better than eating awful green beans.

First up, get a big pot of water boiling; possibly the biggest pot you have. This is because green beans are typically sold by the pound, and you’re hopefully buying several pounds of them, even if you don’t plan on eating them all at once.

While the water boils, perform the back-breaking labour of trimming all of your green beans. Or, if you’re very smart and well-off and purchased pre-trimmed beans, learn to moonwalk, or do whatever it is rich people do with the extra time their wealth affords them.

Once boiling, dump your green beans in the water and set a timer for two and a half minutes. This works for two pounds of green beans. If you have less than that, dial it back to two minutes. If you have more, extend that time another 30 seconds. If you have way more, I feel like you should have thought about how to cook them before purchasing a green bean farm, Mr. Moneybags. 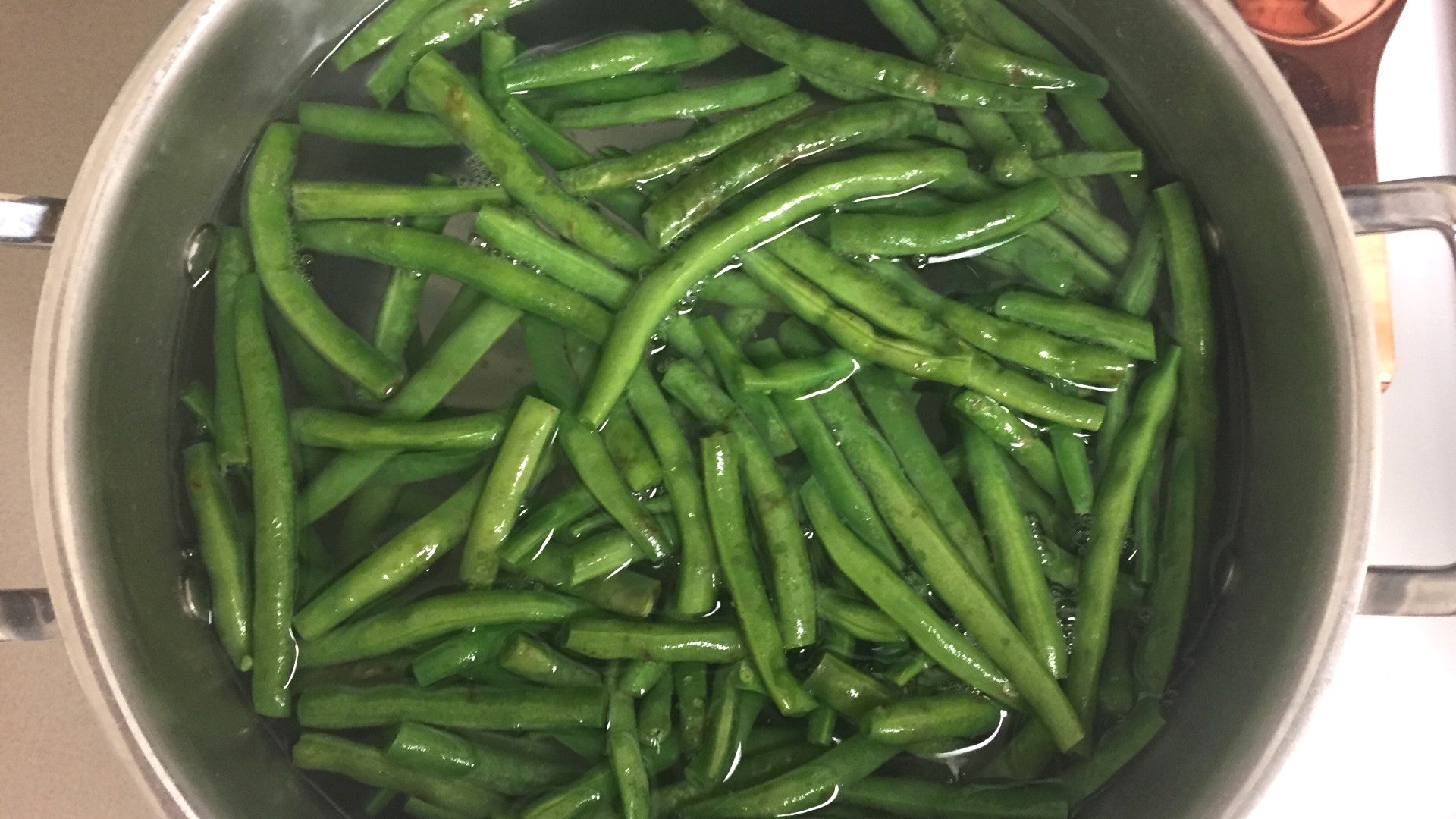 When the timer dings, eat one. If it makes you say, “Ehhhhh, OK, but it could use a little more time?” that’s perfect. That’s what you want. Get them off the heat and stop the cooking process.

My preferred method is to drain them into a colander filled with ice, then cover them with more ice, then run water over them. Truthfully, you can skip the ice and still have things turn out ok, but you’re better off if you put your ice maker through its paces, and you want these to be great, not just ok.

Now, you have options. Assuming you blanched two pounds of green beans, you can stick them in a FoodSaver bag (once they’ve completely cooled) and nibble on them for a couple weeks. But assuming you’re hungry now and want to right the wrongs of green beans past, here’s how to proceed.

While they dehydrate, you’re going to have to do something you’re almost certainly terrified of doing: You’re going to get a pan thermonuclear hot on your stove. (I’m also told that an oven broiler will accomplish what’s to come, and if this describes your setup, good for you. My broiler is akin to cooking food with a Bic lighter, but feel free if you feel you have the necessary BTUs.)

Get a pan on your stove with a very thin coat of high smoke-point oil (like, a teaspoon of vegetable or canola or peanut oil; definitely not olive) over high heat.

Ideally this pan is tri-ply stainless steel, because it’s the most conductive while being the least emissive—that is, it’ll maximally char the outside while minimally cooking the inside. (To all the cast iron humpers out there, it’ll work fine in that too; the difference is ultimately pretty small.)

If you’ve never moved the dial on your stove past ‘5’, now is the time. If it goes to ten, turn it to at least eight! This is going to terrify you, but nothing assuages fear like good green beans. You want the oil lightly smoking: definitely not heavily, but you’re not settling for “shimmering,” either.

Get them into the pan. Do this in one swift motion. I’m sorry to say that there’s no way to not be shocked by the positively violent hissing sound that the pan will make (especially if you’re using stainless).

From here, resist the urge to get too chef-y: My impulse, because I am an idiot, is to toss-toss-toss things like I’m working on the line at friggin’ Per Se.

Not only are we not working with industrial three-ring burners, but over-tossing the beans accomplishes two (bad) things: Limiting the time each side of each bean has with the hot pan, decreasing the char, and increasing the risk of little pan fires. (Another way to help prevent little pan fires is to make sure your beans are super dry, and decrease the heat if things get too smoky.)

If you do get a little fire in your pan, don’t freak out, just turn the heat off and let things chill. 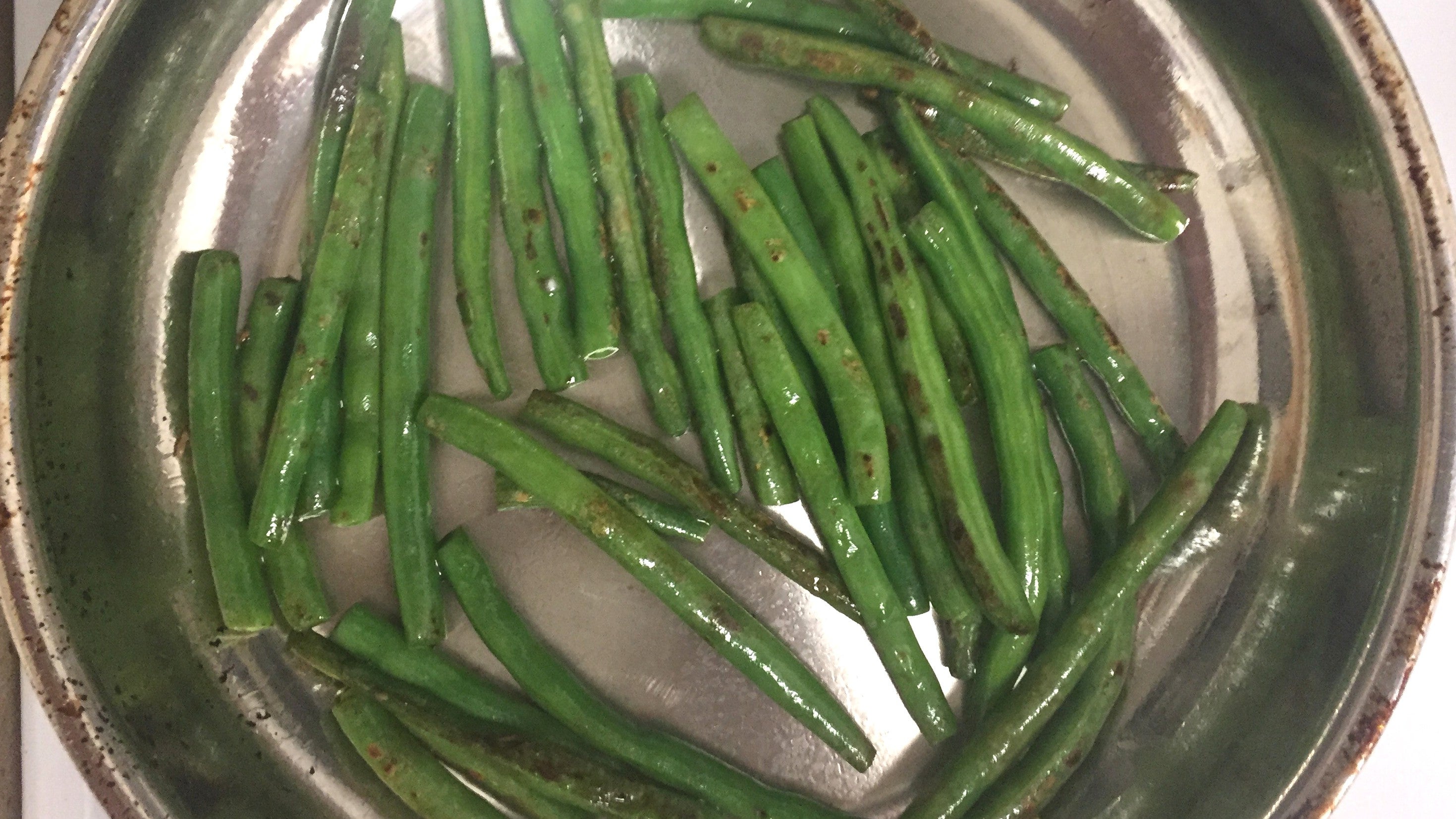 No more than a minute in, and there’s already a lot of action happening. (Photo: Ian Lang)

A better idea is to leave the beans alone for at least a minute. After that, use tongs to move and flip them around so their other sides can get exposure to the hellishly hot pan.

This will go on for four, maybe five minutes (depending on your heat and pan material). A good indicator is the sound: when the sizzle of moisture being driven off has mostly subsided, they’re close to done. Now is the time to get chef-y, tossing the beans to make sure they’re uniformly oily and (mostly) uniformly charred. Get them out of there immediately and onto a paper-towel lined plate.

You’ll notice I never mentioned seasoning, and that’s because trying to do so mid-cook is a fool’s errand. Instead, season them once they come off the heat with plenty of salt and pepper.

These green beans are something childhood you could have never imagined. You have a variety of textures—the smallest ones are three quarters of the way to being burnt, while the larger ones are nicely charred while remaining delightfully tender-crisp on the inside.

Fill a large stock pot three quarters full with water, and bring to a boil. Once boiling, blanch for two to three minutes until bright green and still slightly firm to the tooth. Remove green beans from pot, place or drain into a colander filled with ice, cover with more ice, and then shower with running water until room temperature.

Move a serving for two people (a large handful, or approximately eight ounces) to a stack of paper towels and cover with more to dry. The rest can continue to drain and be stored for later, or cooked in further batches.

Meanwhile, get a very thin layer of oil heating in a stainless steel or cast iron pan over high heat. Replace paper towels as needed until green beans are more or less dry to the touch.

When the oil is lightly smoking, carefully (but decisively) deposit the green beans into the pan, very carefully shaking it to ensure even oil coverage and equal access to the pan’s surface. Let them scorch for one minute, then use tongs to periodically move and turn the green beans around the pan to cook all sides.

After four or five minutes (or whenever the sizzling sound dies down), give them several tosses to touch up any bare spots, then remove from pan. Season to taste and serve immediately. If cooking multiple batches, they can be held in a very low oven for about as long as it takes to reset and cook another batch.