How To Check If Your Hard Drive Is Failing

Windows: I recently had a suspicion that something was up with my hard drive. Spending a little time to figure out what was going on — and to confirm nothing bad was actually happening — saved me $500+, or the cost of the shiny new 2TB SSD I was contemplating ordering off Amazon.

Testing your hard drive’s capabilities sounds like a thrilling way to spend an afternoon, but don’t let my sarcasm fool you. It doesn’t take that long to run a few tests, and it’s actually refreshing to confirm that everything is working as well as it did back when you purchased your years-old drive (or PC). And, of course, saving money by not buying an unnecessary upgrade is the best feeling of all.

I use a few SSDs in my desktop computer, save for a single 3TB hard drive that holds all of my games, drive backups, Nine Inch Nails bootlegs, and other gigantic files. For a few weeks now, I’ve noticed that Steam updates for various games on this drive—heavier hitters like Stellaris or The Elder Scrolls Online—have been struggling to do, well, anything. Downloads would crawl along, even though I have a pretty beefy Internet connection. Progress bars for patch installations would appear to stall for an hour.

Worse, running any kind of Steam update for one of these beefy titles would slow down anything else I wanted to do with that hard drive. No backups. No file transfers. No drive-space analysis. Zilch.

While this sounds like a Steam issue — or, at least, an issue of how updates for certain titles are deployed — I was concerned that my hard drive was finally starting to go bad on me. I didn’t hear the dreaded click of death, but I was getting annoyed enough by the terrible performance that I started contemplating how much it would cost to upgrade to a faster HDD or big-arse SSD once and for all.

Before pulling the trigger, I wanted to run a few tests to see if my hard drive was really to blame, though.

Chkdsk is your friend

The first and simplest way check the health of your drives—be they mechanical hard drives or SSDs—is to run a simple error check in Windows. You’ll want to do more than this to get a full picture of your how your drive is doing, but this is a great first step to see (real quick) if something is wrong with your drive.

Pull up File Explorer, right-click on a drive, and click on Properties. Click on the Tools tab, and click on “Check” under the “Error checking” section. 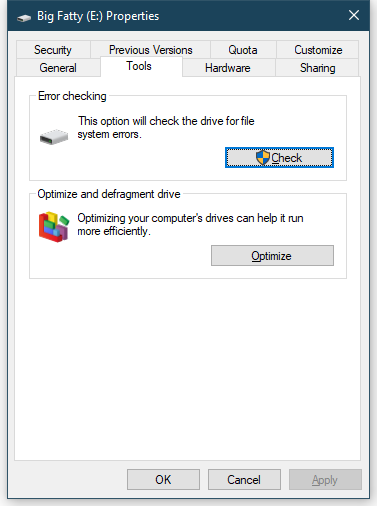 Even though Windows probably hasn’t found any errors with your drive in its regular scanning, you can run your own manual scan to be sure. This shouldn’t take very long, but I wouldn’t trust the progress bar—mine sat on “20 seconds remaining” for longer than that, but didn’t take more than a minute or so to complete.

This process runs a simple read-only “Check Disk,” or “chkdsk,” scan of your drive. You can get a little wilder if you have some extra time to kill. Pull up a Command Prompt with elevated privileges by searching for “Command Prompt” in the Start menu, and then right-clicking and selecting “Run as administrator.”

Then, at the command prompt, you’ll want to type in ‘chkdesk, followed by the drive letter you want to scan, as well as either /f (to have Windows automatically fix any file system errors it finds) or /r (to have Windows scan the entire disk surface for bad sectors, which could take a lot of time.) You might also have to restart your computer if you go this route.

This acronym, short for “Self-Monitoring, Analysis, and Reporting Technology,” represents a little system that’s built into every drive you buy. It tracks and records various data points about your drive, which you can use to look for warning signs at any point. The caveat here is that viewing a SMART report will give you a lot of data that you might not understand, but there are (thankfully) plenty of apps that can demystify the numbers and provide tangible advice.

First, let’s take a look at a typical SMART report. For this, I’m using the free app HDDScan, which makes it incredibly easy to see what’s going on with your drive: 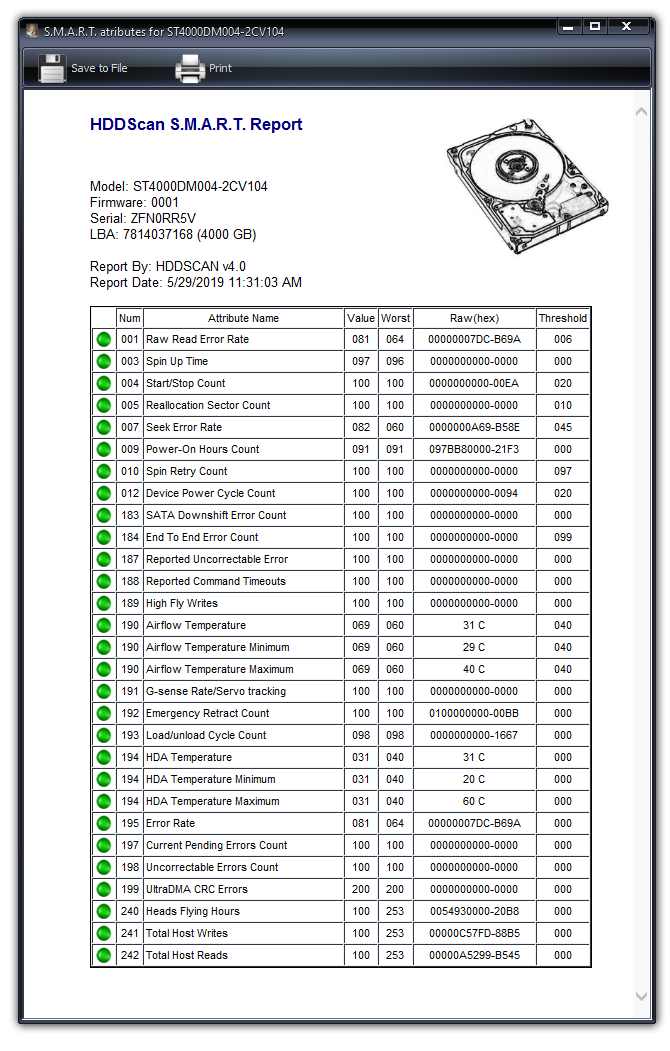 In this case, if you’re seeing lots of green, that’s good—there are no measured values that are far beyond the “this could be a problem” point. If you’re seeing yellow, then the measured attributes might indicate you have an issue with your drive. And if the little icon is red, then your results for that particular test are abnormal, and you should dig a little deeper into what that particular measurement might mean.

You could also just take Backblaze’s advice from 2016 and focus on five measurements that the company uses to determine if any of its (many) drives are about to surrender to the great unknown:

Though remembering these different SMART statistics will be tough, knowing the values you’re looking for is easy: anything above zero. Make sure you aren’t getting thrown off by the “value” or “worst” columns in HDDScan. What you should actually be looking at is the raw code. Yes, it’s in hexadecimal. However, if all you see are zeros on a line, that means zero (go figure)—and that’s the value you want to see for those five attributes if all is going well.

Transfer some data—or a lot of data

There are plenty of ways you measure whether your hard drive performs well at its two most critical tasks: reading and writing data. This could be something as simple as dragging and dropping some files between your drive and a faster one and seeing if it takes a lot longer than you expected—minus all the other factors that can affect that process. (I’m trying to keep this simple.)

You can also use any number of apps to evaluate your drives’ performance via synthetic benchmarks. They won’t be indicative of the exact performance you’ll always see in everyday use, but they’ll give you a good sense of how your drives might be performing—if something is struggling, you’ll know real quick.

While the aforementioned HDDScan can run various read and write tests on your drives, I’m a bigger fan of HD Tune. It’s simple, easy, and has a lovely graphical readout of your drive’s performance. The basic version of the app is free to use, and that’s all you’ll likely need (even though you’ll only be testing read performance, not write performance).

To get started, load up the app, pick your drive, and click “Start.” You’ll start to see your average transfer rate—with min, max, and average values—as well as your drive’s access time (how long it takes your drive to actually start transferring data, which is more a measurement of its mechanical characteristics than anything else) and burst rate (how fast data travels from the drive’s cache). 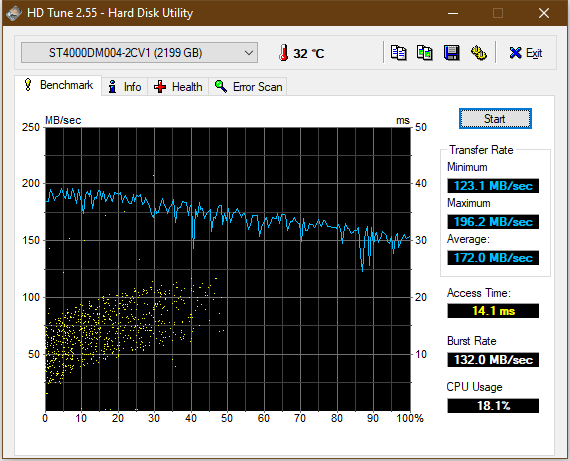 I was a little curious as to why my drive’s burst rate is lower than its average transfer rate, which made me think I have some kind of motherboard misconfiguration (unlikely) or HD Tune is screwing up (possibly). To double-check these figures, I gave another drive benchmarking tool a shot: CrystalDiskMark. 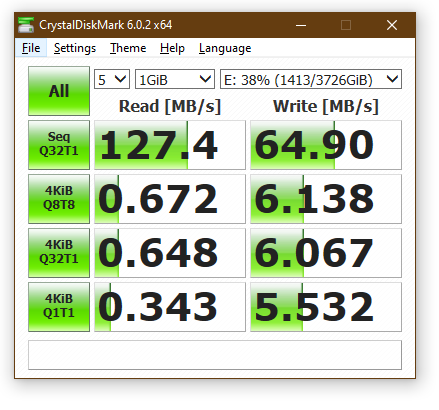 That’s a pretty decent result for a sequential read and write. The rests of the tests are incredibly low, but that’s likely due to the fact that they’re attempting to read and write tiny 4KB files all around the drive—a technique that mechanical hard drives don’t do very well with, especially the slower 5,400RPM drive I’m testing.

CrystalDiskMark doesn’t report a burst rate, so I had to turn to the HDTach utility, which is so old that it only worked in Windows 10 when I ran it in compatibility mode for Windows XP SP3. The measured burst rate was more favourable in HDTach; since it’s finally higher than the transfer rate, I feel a bit better knowing that I wouldn’t have to go crawling around my motherboard’s BIOS to see if anything was wrong. 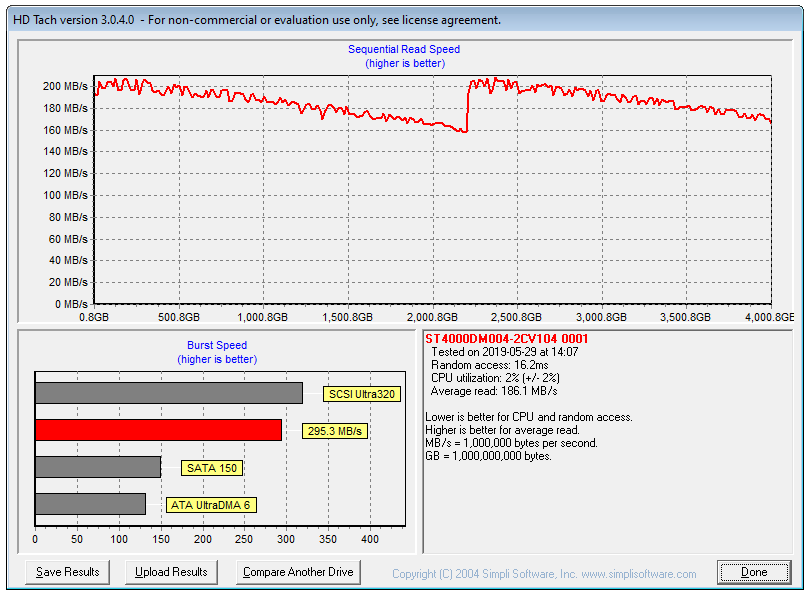 Even though HDTach and HD Tune disagreed with CrystalDiskMark in terms of the drive’s average read and write performance—the former two apps had much higher scores than the latter—my main purpose for running these benchmarks was satisfied. If the drive was truly having issues, there’s a chance I’d see catastrophic performance errors. Anything north of 100 MB/s is likely pretty good, but just to confirm this, I also ran a quick UserBenchmark test.

These results validate my thinking: my hard drive is running decently. Could it have faster results? Sure. Do I know why it doesn’t? No. But these results indicate that the drive is performing better than roughly 73 out of every 100 results UserBenchmark receives, which sounds pretty great to me.

While I probably could have deduced that Steam’s update process was to blame for all of this from the get-go, testing my mechanical hard drive was a good exercise to go through nevertheless. (I plan to upgrade it at some point, but it’s not a high priority at the moment.) 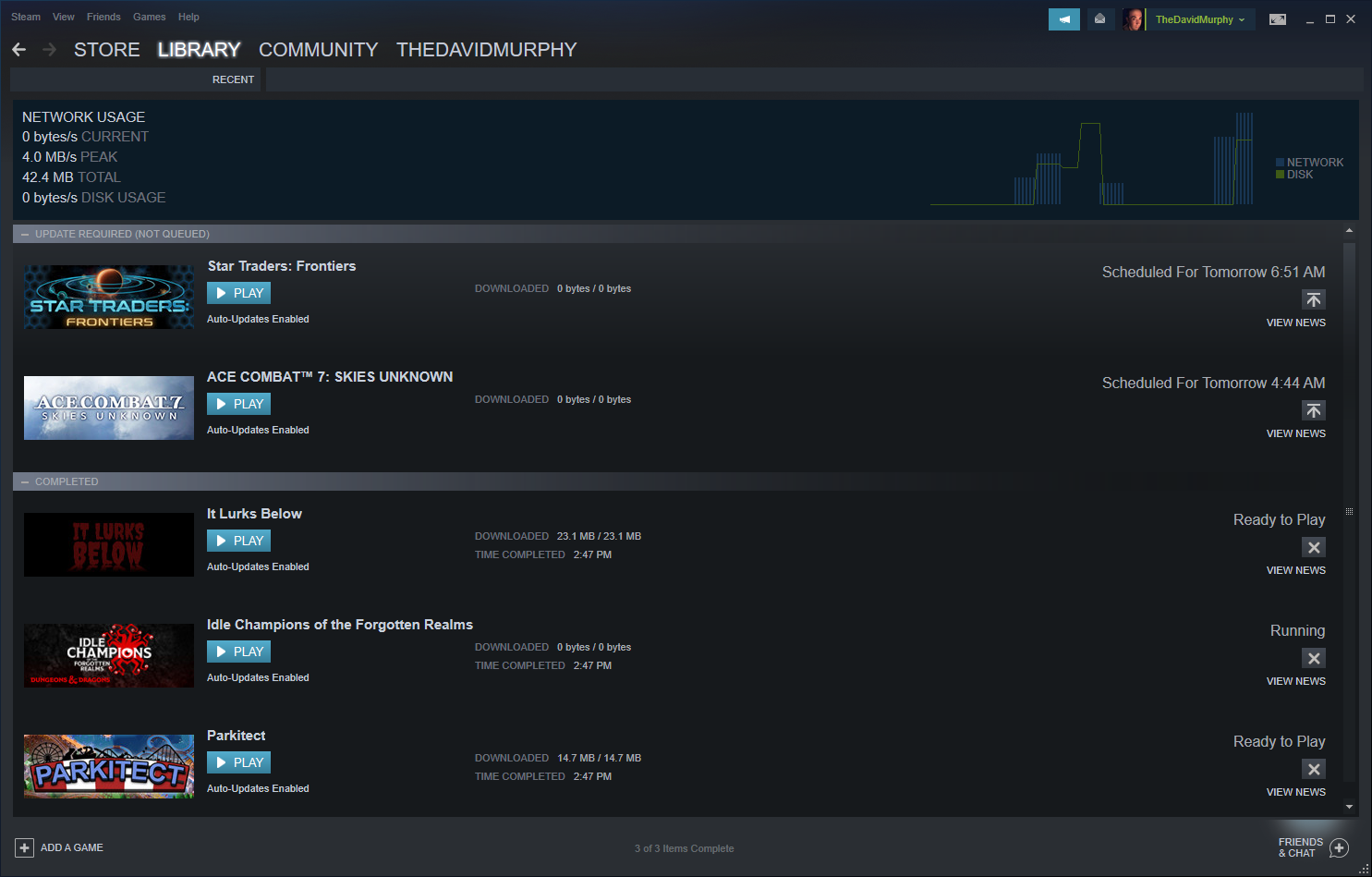 As for Steam, the solution there was simple—I limit downloads to only run from midnight to six a.m. I then let ‘em chug overnight if I ever have anything huge to grab. I can also run updates manually if I’m going to be stepping away from my computer for an extended period of time. It’s a much more elegant solution than trying to process a multi-gigabyte update while I also need to use my hard drive for, you know, regular stuff.

I still want that SSD, though.