Windows: Most computer geeks know about WinDirStat, an incredibly useful utility that shows which folders and files are taking up so much room on your drive. It’s a must-have app, because you’ll be surprised – heck, I’ve been surprised – how many times you might find some random, triple-buried folder on your desktop that’s using an unseemly amount of space.

The problem? WinDirStat takes a while to work. On my primary 500GB solid-state drive, which has around 252GB of free space at the moment (just my Windows OS and my applications), WinDirStat took 42 seconds to finish an analysis. While that’s less time than the Blue Apron commercial on your favourite podcast, it still isn’t very speedy.

I recently saw some chatter about the app Wiztree, which basically scans your drive(s) just like WinDirStat. I downloaded its portable version and pulled it up, picking the exact same drive to analyse as before. It took Wiztree all of 1.44 seconds to accomplish the same results as WinDirStat, a decrease of a mere 96.6 per cent. How does Wiztree’s sorcery work? As the app describes:

When scanning NTFS formatted hard drives (most modern hard drives use this format), WizTree reads the hard drive’s Master File Table (MFT) directly from the disk. The MFT is a special hidden file used by the NTFS file system to keep track of all files and folders on a hard drive. Scanning for files this way completely bypasses the operating system (Windows) and provides a huge performance boost.

Though the two apps differed on the specifics – how many exact files of a particular type they found, or the exact per cent a certain folder took up – I’ll write that off to each counting (or ignoring) different kinds of files.

Both ranked my largest folders and files correctly, which is what matters, anyway. You aren’t going to care very much about that folder that has 50MB of random stuff in it, but you’re going to care a lot about identifying the folder that has a few 4K movies you accidental duplicated. If one program is a few MB off from another, it’s fine. Life goes on.

I also like how Wiztree uses tabs to organise its more general Tree view – to get a sense of which folders are eating up too much space in your search – and its File view, which makes it incredibly easy to see which huge files you might want to delete. Right-click on any file to pull up the usual Windows context menu, which you can then use to load an instance of File Explorer at the file’s exact location. Delete as you see fit. 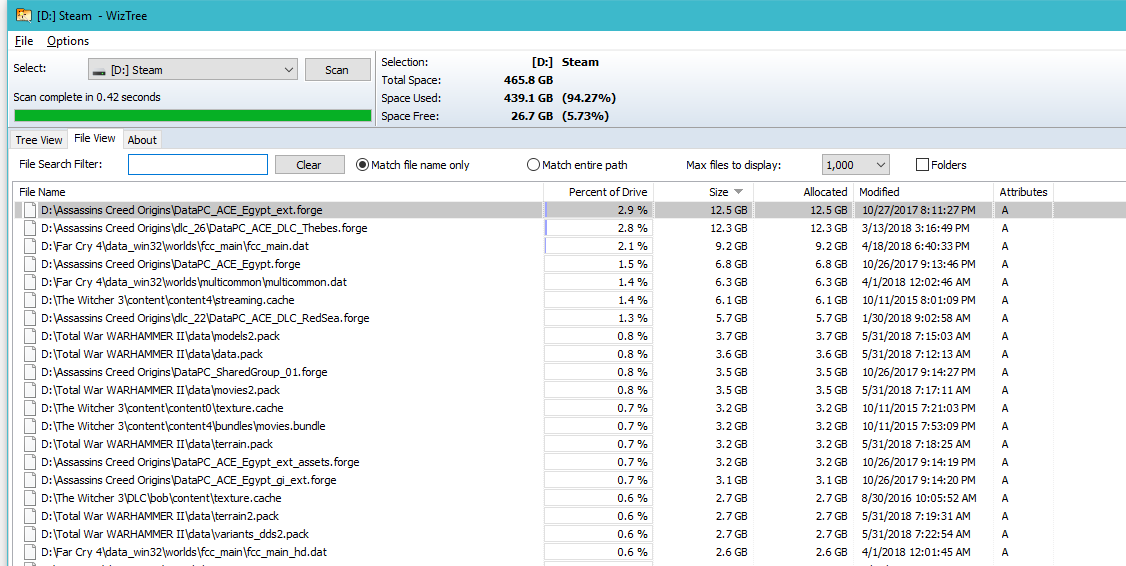