iosjournalismlongformnarratepodcast
To sign up for our daily newsletter covering the latest news, hacks and reviews, head HERE. For a running feed of all our stories, follow us on Twitter HERE. Or you can bookmark the Lifehacker Australia homepage to visit whenever you need a fix.

iOS: I love podcasts. I love them in my car; I love them when I’m working out. I’ll even put on a podcast when I’m in the shower — mainly to help me get through my way-too-large queue.

While I can read a lot faster than I can listen, I can’t read everywhere I go. (See the previous list of examples.) For that reason, I’m also intrigued by the iOS app Audm, which gives you daily, curated pieces of long-form journalism read by others. It isn’t quite a podcast, but it’s a great for educating yourself on what’s going on in the world in a way that works with your horrible commute.

I’ll get the bad news out of the way first: Since this whole enterprise costs money, Audm is free to download, but you can’t do anything with the app unless you sign up for a monthly plan ($10) or an annual plan ($7.75 per month). You do get a three-day free trial, but that doesn’t give you a lot of wiggle room to cancel before the fee comes around.

In case you don’t want to bother with that, I signed up so you don’t have to, and here’s what I liked most about Audm.

Most of the long-form journalism I’d likely find around the web and spend a half-hour of my lunch reading is right there in Audm.

I counted, and there were 49 different publishers (including Audm’s original content) to pick from, including journalistic heavyweights such as Esquire, Harper’s Bazaar, The New Yorker, Texas Monthly and, my personal favourite, Outside Magazine. (I love a good mountaineering article.)

You’re going to want to have diverse tastes, as you shouldn’t expect a regular, daily cadence of content to listen to. To use my example, Outside Magazine only had five stories published on Audm for all of April. Magazines such as The New Yorker are better, giving you a handful of new items on a weekly basis.

Still, the daily news this is not; open up your interests a bit, however, and you should have plenty to listen to for your daily commute.

Unlike your favourite podcast app, you can’t subscribe to publishers on Audm. Instead, you’ll have to check up on different publishers to see if they have any new content worth listening to — assuming there isn’t some kind of notification I’m missing in Audm’s sidebar, since I’m stuck on a limited-time trial.

At least the app has an “all” feed you can use to find stories to listen to, even though there’s no way to list out the content chronologically. These issues aside, the app does a reasonable job of presenting the stories in a podcast-like fashion. You can add stories you’re interested in hearing to a queue, and they’re all narrated by real people — much better than hearing a 30-minute piece narrated by Siri.

The voiceovers themselves sound more like an audio book than NPR or This American Life, so I definitely recommend taking advantage of the Audm’s free trial to see if that kind of style appeals to you. If not, make sure you cancel in time.

I was pleased that Audm is compatible with CarPlay, which means you’ll be able to listen to the app without issue via your car’s dashboard system. Playback controls are limited — just 15-second skips back and forward, as well as a speed toggle (which I recommend kicking up a little bit, since the article readers can tend to drag). 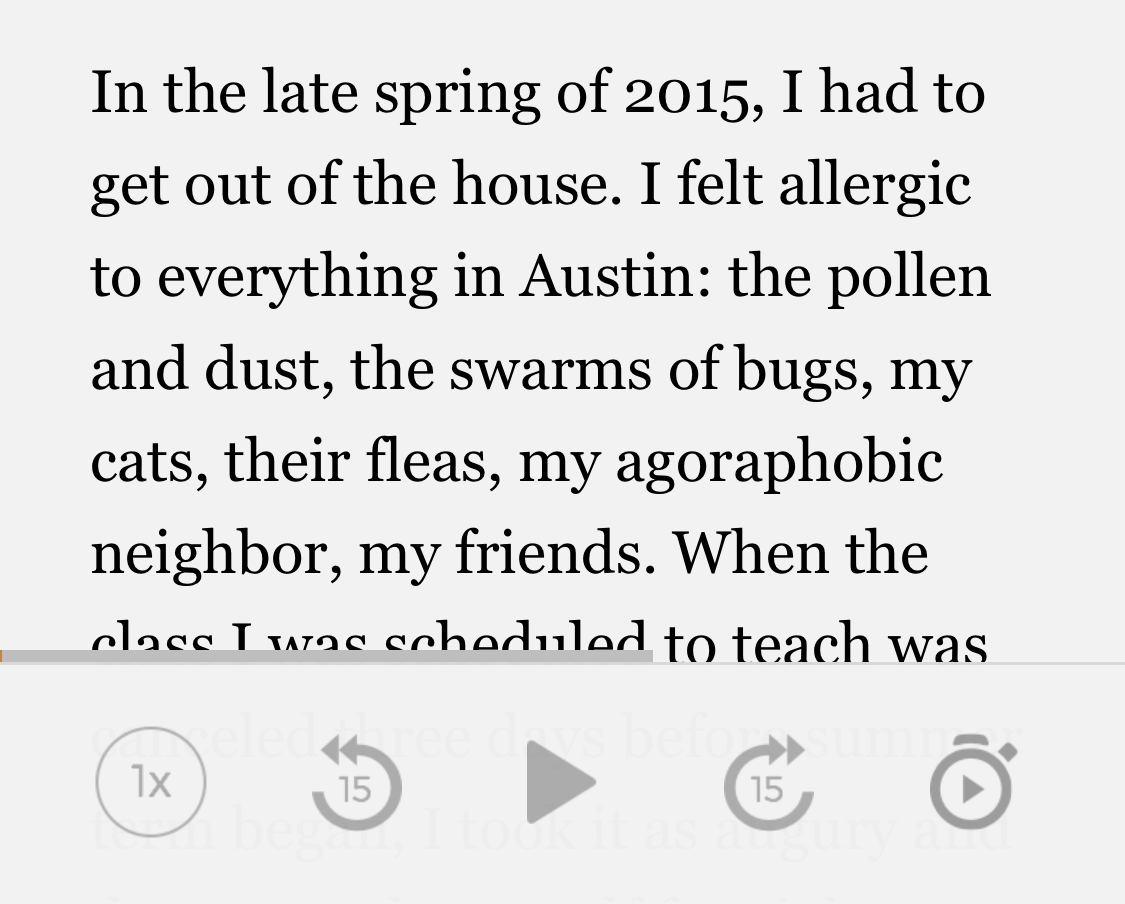 One little feature I particularly enjoy is that you can set a duration for how long you’d like an article to go — useful if you want to give yourself a quick 30-minute reading break and don’t want to fuss with having to set a separate timer on your device.

One feature I particularly miss is the ability to cast your article’s narration to one of your smart speakers, which would be even more ideal. 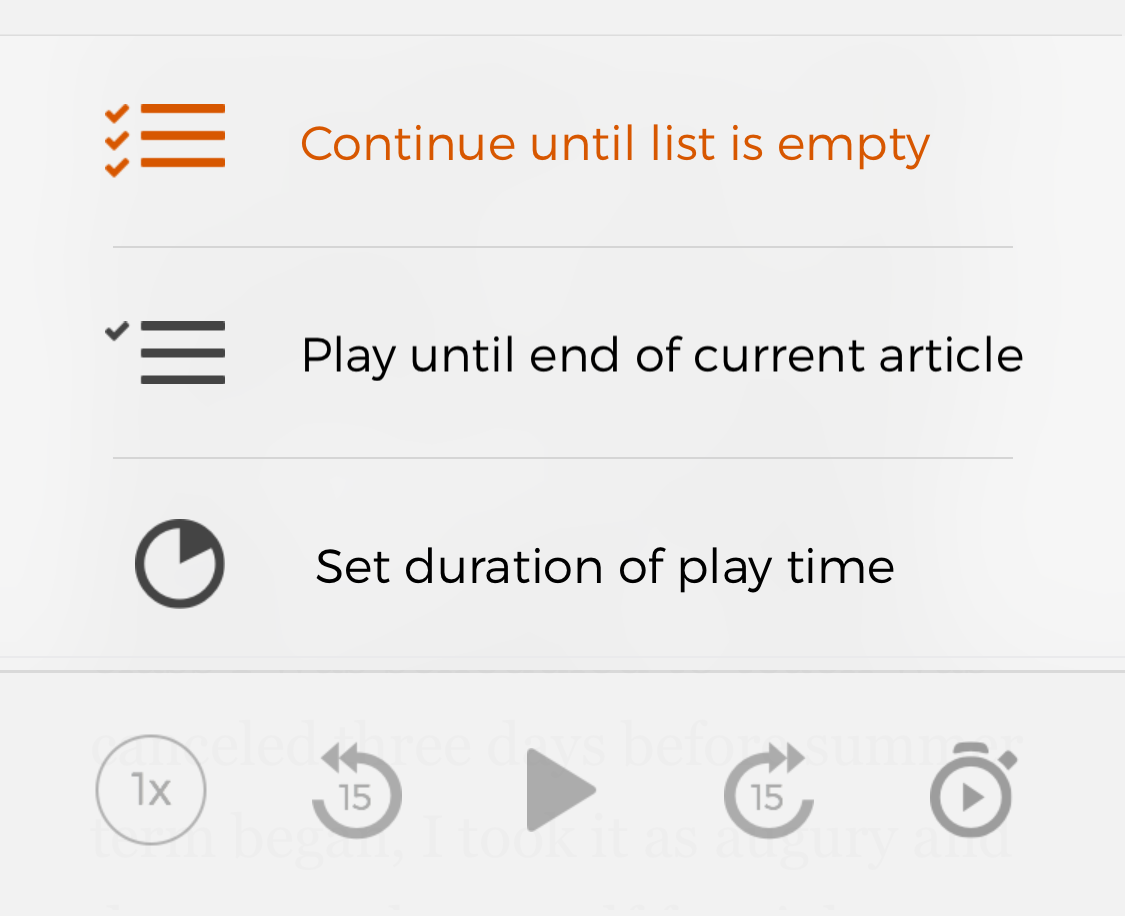 Though light on features and organisation, Audm makes up for it with a healthy amount of overall content that you can easily listen to instead of reading. The app isn’t perfect, but it does fill a niche.

And if it doesn’t appeal to you, there are plenty of other options, including Curio and Noa. Though Audm is iOS-only for now, the website claims an Android version is coming soon, and the app’s Twitter feed seems to back that up.