You Really Can Charge Your Phone With A 9 Volt Battery

emergency preparednessphone chargerpower outageusb
To sign up for our daily newsletter covering the latest news, hacks and reviews, head HERE. For a running feed of all our stories, follow us on Twitter HERE. Or you can bookmark the Lifehacker Australia homepage to visit whenever you need a fix.

In a power outage, a 9 volt battery can give your phone enough juice to make a call or send a few texts. You may have seen this hack before, but it works especially well in this variation where you use the spring from a pen to connect the negative terminal.

You’ll need a car charger — the kind you plug into what used to be called the cigarette lighter in your car. Just grab a spring from a pen, and tape it to that little metal nub on the side of the charger, as shown in the photo above.

Then line up your 9 volt battery, with the big (negative) battery terminal on the spring, and the positive (smaller) terminal touching the button in the center of the car charger.

Then just hold it in place. For a while.

How long will it take?

It took me 7 minutes to charge my iPhone SE from 60 per cent to 67 per cent charged. The exact time it takes may vary, depending on how charged your phone is and how much juice is left in the 9-volt.

Your hands may get tired, but you’re free to MacGuyver up your own solution for this part: duct tape the battery to the charger, perhaps, or wedge the whole apparatus between some heavy books and the wall.

How much of a charge will I get?

A typical 9 volt battery has 500 milli-Ampere hours (mAh). Compare that to the size of your phone’s battery. A few examples:

It would take four 9-volt batteries to fully charge my little phone, or six to charge a Galaxy S9. So this isn’t a long-term solution, but it can get you that little bit of charge that can let you text your mum, or order a Lyft or, if necessary, call emergency services.

What if it doesn’t work?

If you have trouble getting any of these parts to stay in place, use a scrap of aluminium foil to bridge any gaps. 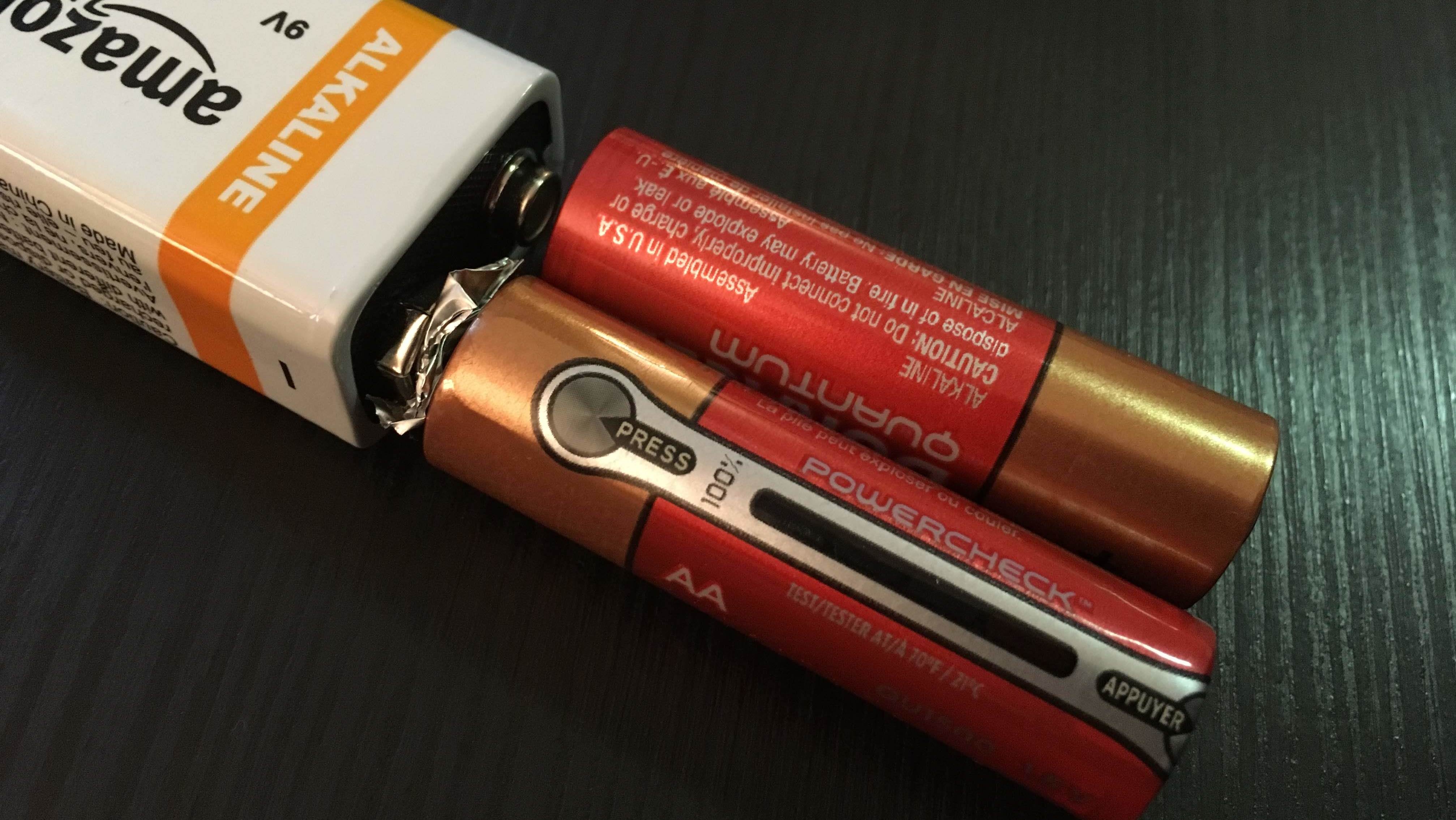 Note the aluminium foil connector. After lining everything up, I wrapped the whole situation in masking tape. (Photo: Beth Skwarecki)

On a large phone with a fast-charging charger, the 9 volt battery may have trouble supplying enough voltage under load, and the charger may repeatedly start and stop. This isn’t confirmed, but it’s a theory my husband had when we tested this hack on his Moto X Pure and a charger capable of Qualcomm 2 fast-charging. So we added two AA batteries to the circuit. I used balls of aluminium foil to help the batteries make the connection, and taped them in place. (Make sure the bits of foil do not touch each other! You don’t want a short circuit!)

With the 9-volt alone, his phone dropped from 77 to 76 per cent during five minutes of attempted charging. But a bit later, when it was at 75 per cent, I managed to charge it to 77 per cent in five minutes with the extra batteries.

So if you’re preparing for a blackout, pick up some 9 volt batteries and make sure you have a pen around with a spring you can use. (In a pinch, you could substitute a piece of folded aluminium foil for the spring, but the spring is just really handy.)

That said, it’s even better if you just get a big portable battery for your phone, and make sure it’s charged before the storm comes. Don’t forget that if you have an old laptop sitting around — even if its screen is broken or it has other issues — you can charge it up and power your phone off its USB ports.