See The Potential Impact Of Hurricane Florence With This Interactive Map

The National Hurricane Center expects Hurricane Florence to cause “life-threatening, catastrophic flash flooding” when it makes landfall in the US later this week, and now there’s a tool that gives us an idea of just how catastrophic that impact will be.

This tracker from ESRI takes the familiar prediction model and uses it to calculate some key demographic data for the area inside the error cone. ESRI’s tracker shows the total population, total households, and total educational organisations in Florence’s projected path: 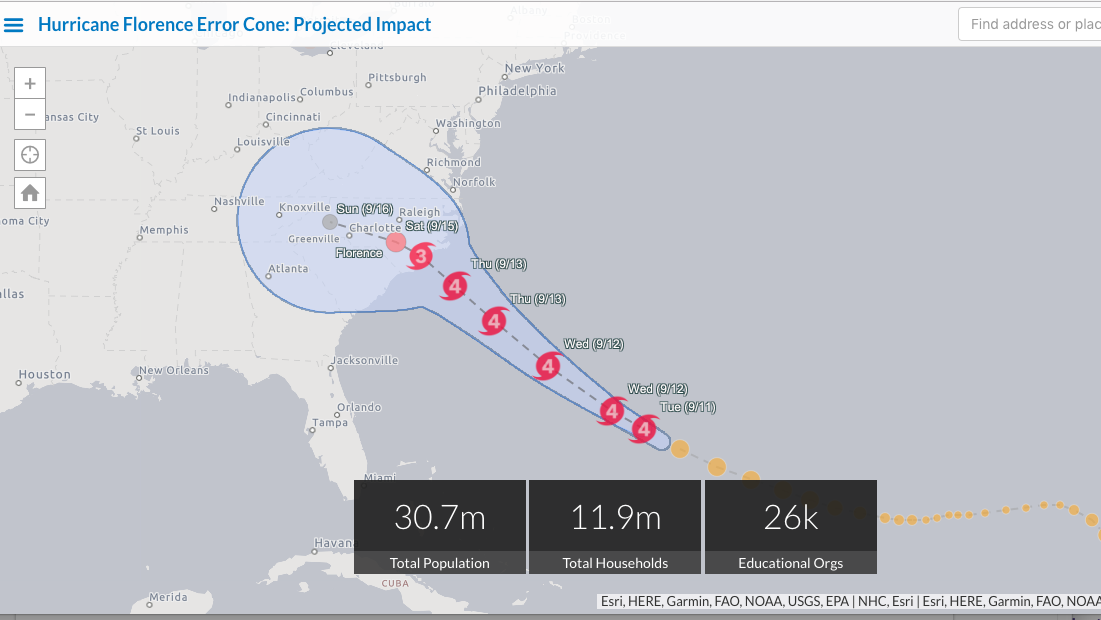 Clicking on the individual items in the legend pulls up more data, including the proportion of the total population that’s over age 65, and how many of the total households are below the poverty line. At the time of writing, 16 per cent of the affected population is over 65, with 15 per cent of affected households living in poverty; the median household income is $US51,000 ($71,811).

Whether you’re smack dab in the danger zone or watching the storm from afar, you should know how to correctly read an error cone projection. ESRI has an efficient summary in the description of their tracker (emphasis mine) that hits on the main points:

The Cone of Uncertainty… represents the probable track of the center of a tropical cyclone, and is formed by enclosing the area swept out by a set of circles along the forecast track (at 12, 24, 36 hours, etc).

It is important to note that the area affected by a tropical cyclone can extend well beyond the confines of the cone enclosing the most likely track area of the center.

In other words, if your city — or your loved ones’ — is outside the error cone, it just means that the centre of the storm isn’t expected to pass over; areas outside the cone can still expect high winds and heavy rain, and should watch local forecasts extra carefully in the days to come.

That’s the most important thing to take away from error cone projections, but if you’d like a more in-depth explainer, this Wall Street Journal piece briefly explains how they’re calculated, how to correctly interpret them, and what the limitations are.

Understanding the potential human cost of a storm — especially among vulnerable populations — is a crucial first step to mobilising support for communities that’ll see the worst of it. Check in on your friends and family in the area, and get your own cyclone plan locked down too.