What To Do When Your Teen Hates You

You knew it would happen, but you never thought it would happen this fast: Your child has become a teen. And now, suddenly, everything about you is annoying or embarrassing – the shirt you’re wearing, the way you walk, the questions you ask, the gifts you buy, the pace at which you spread cream cheese on your bagel. The kid can’t stand being around you.

Yes, this kid. The same darling child who once jumped into your arms whenever you picked him up from preschool, the one you called your shadow because he would never leave your side. What happened?

Adolescence happened, and as frustrating and painful as it can be for you as a parent, the fact that your kid is “allergic” to you is healthy. Really.

Asher Brauner, a family therapist in Santa Cruz, California who has worked with adolescents for years, tells me that teenagers have an “inner mandate to individuate” – or as Kelly Clarkson might say, break away. This, of course, is a massive feat. The kid has relied on you for so many years (you’ve wiped their bottoms and peeled their grapes, for goodness sake). When they suddenly try to assert independence, things are bound to get messy.

In his practice, he has seen parents make it worse. “We know how it can go,” he says. “The kid yells a little bit. The parent yells a lot. The kid says, ‘I don’t like this.’ The parent says, ‘Well, you’re grounded.’ And then the kid says, ‘Fuck you.’ And now where are we?”

Teenagers, he adds, “aren’t dropped in from space”. They’re still themselves – just more emotional, dramatic and sometimes really cranky versions of themselves. “They’re human beings,” he says. “They want respect and need to be heard. They are no different from you and me or anyone else in wanting to be understood.”

He shared some ways parents can support their teen through this difficult phase and come out alive on the other side.

Brauner believes that parents who start teaching basics such as “don’t be rude” when their kid is a teen have already lost half the battle. That work must start earlier, he says, way earlier. You have to lay the groundwork at around age three, and reinforce it often.

“Young people go through a a major struggle to identify their power at two times: When they’re toddlers and when they’re teenagers,” he says. “When they’re toddlers, it’s a good idea to make it clear that you mean what you say and you say what you mean, in a loving and firm way, so that trust is built.” If you do this, he says, when the kids grow up, they will have a baseline understanding of your expectations.

He gives this example: “You might say, ‘You may not drink alcohol. I’m not angry at you. I’m not upset about the possibility that you would think about doing such a thing, but it’s just not OK.’ When you say ‘not OK’ to a 14-year-old and you’ve been saying it for 10 years and they’re used to it, they might chafe at it a little bit, but they assume at this point, ‘My parents mean me well.'”

Parents are often the problem more than their teenagers, Brauner says. They overreact when their teens huff or roll their eyes. They take it personally, thinking, I didn’t raise you to act this way.

“Parents who take every minor provocation personally are signalling to their teenagers that they are so very powerful that their every move can destroy their parents’ day,” Brauner says. “That’s a foolish message.”

When a teenager’s world becomes uncertain, they seek security by testing their parents. When they lash out, they are implicitly asking you, “Can I still trust you to be strong?” The way to say “yes”, Brauner says, is to not let them rile you up.

High school and university students are suffering from unprecedented levels of anxiety, and anyone raising teenagers these days knows they're coping with huge amounts of stress. This goes double for girls, who have what Rachel Simmons calls 'role overload' in her book Enough as She Is. How to Help Girls Move Beyond Impossible Standards of Success to Live Healthy, Happy and Fulfilling Lives. Girls have to be smart and beautiful and athletic and ... they have to look as though playing all these roles takes no effort at all.

And yes, that is hard. Brauner says you must gather all the tools you’ve ever used to calm yourself during fight or flight situations. Do correct any behaviour that is intolerable (you might tell them “You are free to be frustrated but you may not speak rudely”), and enforce the rules you have set.

But don’t engage if you yourself are fuming. Tell your kid you need a minute. Go take a walk. Splash water on your face. Make yourself some tea. “Your internal monologue has to be, ‘I’m going to be the calm one because it looks like my kid can’t do that right now,'” Brauner says.

Ramp Up Your Support System

It’s far from perfect, but there has developed a sort of built-in tribe for parents of babies and young kids. If you’re looking for it (and even if you aren’t), everyone is ready to give you advice. There’s unlimited support out there if you’re wondering how to help calm a teething infant or help a toddler with night terrors.

When your kids become teens, however, the tribe “kind of dissipates,” Brauner says. It is up to you to ramp up your support system during what can be a uniquely isolating time.

Brauner explains, “In every community I’ve been in, there are teenage parenting classes that nobody goes to. ‘How to support your teen.’ ‘How to be a positive parent to your teen.’ Schools often provide them. But parents feel like, ‘I’ve exited this 10-year difficult era. Can I have a break? Do I really have to go to more workshops?'”

The answer is no, you don’t, but you might consider it. Just sitting in a room with others who are going through the same thing, and being able to say “This is really hard” can be therapeutic. It may just be the outlet you need.

You’ll also want to spend a lot of time with your partner and friends and anyone who can assure you that yes, your shirt looks amazing even if your teen swears it’s the ugliest thing she’s ever seen. Try to see this phase in your teen’s life as good for the both of you – the separation allows you to become your own person again and find passions and interests far beyond your role as a parent.

Continue to Physically Be There

It’s important to be a non-anxious presence around your teenager, even if you’re just sitting there in silence. Every day, Brauner would tell his two teens, “I’m wondering how school was today. I’m available to talk if you’d like to.” They’d usually respond with an “Eh” or “Not now” – and that would be completely fine. He’d say, “OK, well, I’ll work on my crossword” and would then just sit there in the living room with them. 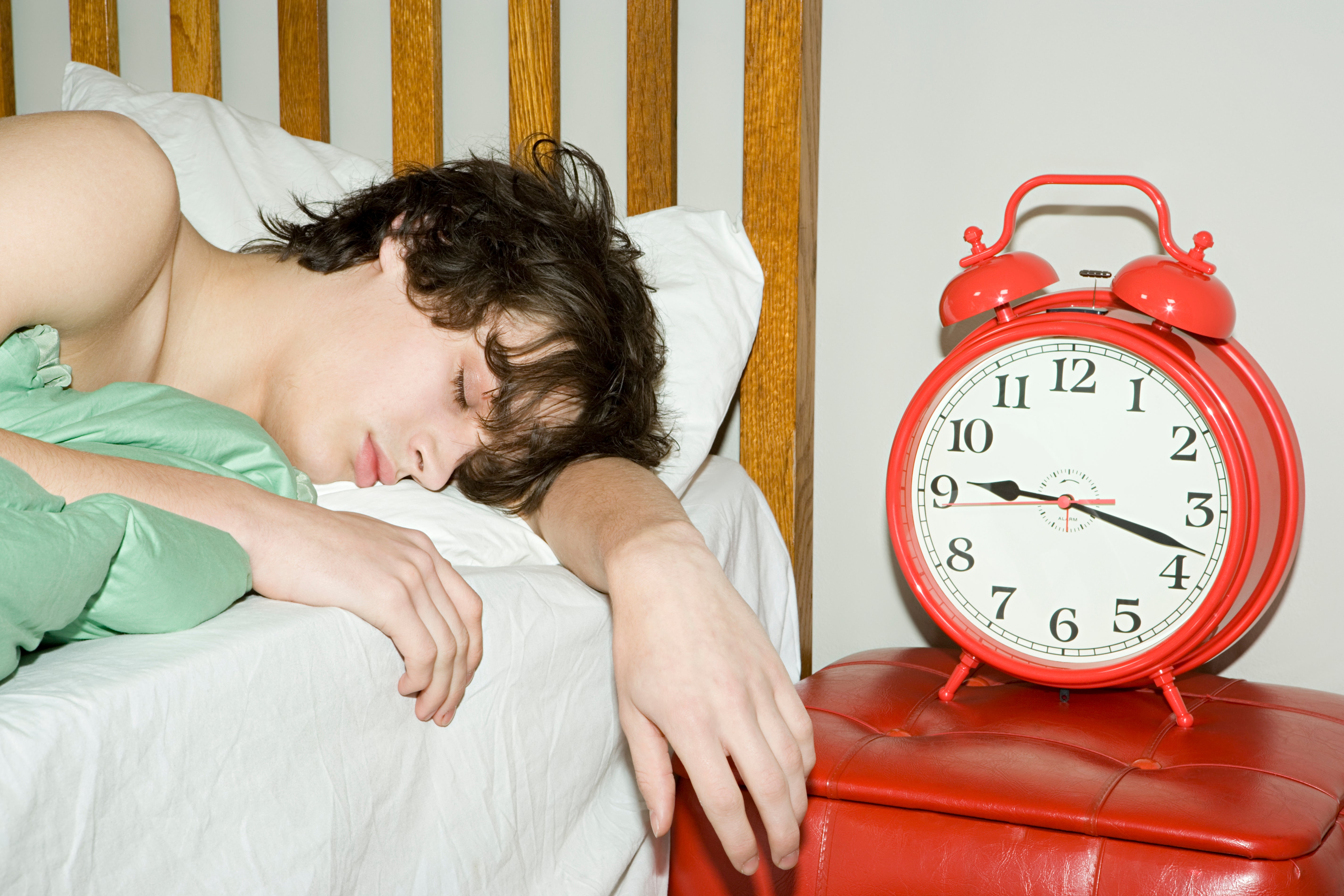 How To Help Your Teen Get More Sleep

When it comes to teens getting enough sleep, numerous forces are working against them. Early school start times are wreaking havoc on their circadian rhythms. An overload of after-school activities is turning bedtime into gotta-start-on-homework time. The buzz of texts from friends, the screens shining in their faces and the constant lure of just one more game or episode of Riverdale are keeping their brains wired well into the night. And all the lectures coming from concerned mums and dads seem to be dissolving into thin air because, well, adolescence. And so they slog through their days, cranky and short-fused and barely able to respond to basic questions. As parents, you wonder if there's anything you can do to help.

“The idea is, ‘I’m not pushing you to share about your life. But I’m also not giving up on you.'” Studies show that spending time with their parents is important for teens’ well-being, even if that time isn’t always filled with deep connection. Brauner knew that hanging out with his kids on a regular basis “in a calm and trustworthy manner” would eventually lead to one of them saying, “Guess what? I got a great grade today,” or “My friend broke up with me.”

“They will share their lives if they feel comfortable at home,” he says.

Take advantage of other fleeting opportunities to connect – for instance, talking to your teens in parallel position when there’s no pressure to make eye contact can help dissolve any anxiety.

Yes, This Phase Shall Pass

After teenagers feel they have established themselves more as individuals (a process that has no definitive timeline, unfortunately), they warm up to their parents again. Their brains evolve and they learn to regulate their emotions better. Everything starts to feel a little less intense.

And Mark Twain’s famed quote on adolescence rings true: “When I was a boy of 14, my father was so ignorant I could hardly stand to have the old man around. But when I got to be 21, I was astonished at how much the old man had learned in seven years.”

Brauner says, “Some of the wonderful and most intimate times I’ve had were with teenagers. They’re human beings. They have love. They are caring. They are not hostile entities to be feared. They’re lovely and they have a tremendous amount of enthusiasm for a world.”

All of this can be hard to see, but keep looking. One day, if they have teenagers of their own, they will call you to ask, “Oh my God, was I ever like this?”