What I Learned Doing NaNoWriMo For The First Time

This past month I participated in National Novel Writing Month (also known as “NaNoWriMo”). It was fun, exhausting, stressful and, at times, miserable. But it was also one of the greatest lessons I’ve ever learned regarding time management and creativity.

How To Write A First Draft Without Giving Up

Julian Gough, Irish novelist, memoirist, poet and playwright, gives densely packed advice in his essay How To Edit Your Own Lousy Writing. He explains the 'job' that a first, second and third draft each do, editing a hypothetical scene as a concrete example.

The goal of NaNoWriMo is to write 50,000 words of a novel in the span of one month. That breaks down to about 1667 words a day (for reference, this article isn’t even half that). Your novel doesn’t necessarily have to be finished – mine isn’t – but in order to “win” you must write down at least that many words. It’s an exciting endeavour! Imagine your life one month from now and you have a novel, or at least the great start of one, and you’ll get the idea. Still, when you have a full-time job, a personal life, a family, and other side projects in the works, it can be incredibly difficult to find the time to get your words in.

But it’s all worth it. NaNoWriMo taught me many things. I learned once and for all what times are best for me to write during the day; I learned that listening to ambient sounds can be just as good, or better, than listening to music when I write; I learned that it’s better to save the fun parts write for later so you can hit the ground running when you start your next session; and I learned that I generate more ideas for other projects when I’m working hard on one big project. It’s like a creativity feedback loop that gets stronger and stronger the more you do and the more capable you start to feel. 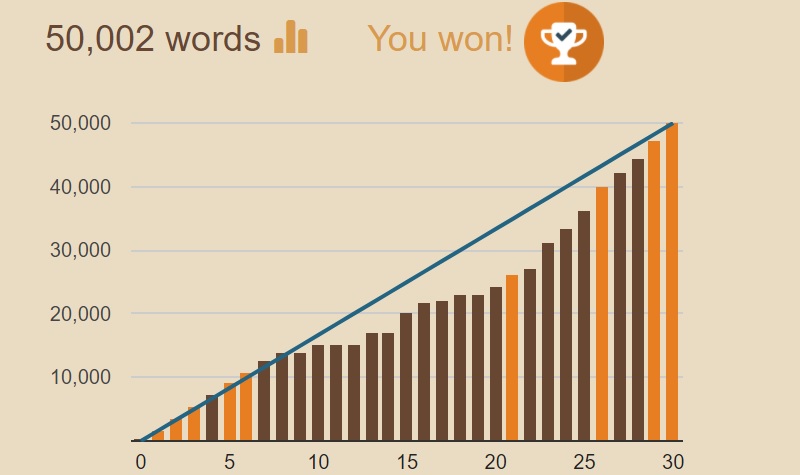 I had to do some catch up…

I had to do some catch up…

Most importantly, though, I learned that there is always time to create things. No matter how busy I was – with my full-time job, other writing projects, multiple weekend trips to San Diego, business trips to New York, running tables at multi-day conventions – there was always a little time to sit down and spill out some words for my story. I even managed to write on my birthday. Eat your heart out, Stephen King. NaNoWriMo, more than any other creative endeavour I’ve undertaken, gave me a serious lesson in time management. I knew that “finding” the time was never going to work. You don’t find time, you “make” time. But this challenge proved that concept for me tenfold, especially as the month dragged on and staying on track got harder and harder. Falling behind a little every day means being behind a lot near the end. If I didn’t write enough one day, I knew I’d have to make it up later, and that really became apparent in the second half of the month. There’s no doubt in my mind this lesson would not have sunk in the way it did for me had I given up after 10 days. You need the whole month.

This challenge also forced me to re-examine the way I was spending my free time before I started NaNo. Even though I was writing more than I had ever written before, I still had plenty of time in November to see friends, watch TV, go to the movies, travel, and even play video games. Admittedly, I didn’t get to do any of those things nearly as much as I did before, but the kicker was that I didn’t miss it all that much. It’s kind of like having a couple of bites of a dessert instead of gorging yourself on the whole dish. I still got the satisfaction of doing those things without going overboard. You can have your cake and eat it too – just not all of it.

What I Learned From Binge-Writing Nine Bad Novels

This year, I will write my tenth terrible novel. I do this every November; it's part of the NaNoWriMo tradition. I've never published these novels, but I grow as a writer and as a human being every time I write one. Let me tell you why it's worthwhile.

I don’t know how long the effects of this hard-earned mindset will last. As of now, I can barely sit down to enjoy a video game or watch TV the way I used to because I feel like I’m not being productive. It’s like having a little shoulder devil dressed in a business suit constantly poking me with the pitchfork of success. It’s nice to feel driven, but it’s also exhausting. Still, I’m looking back at my life before I tried this wondering what the hell I did with all my time. I believe I’ve started to form a new, highly beneficial habit, and I don’t plan on flicking that devil off of my shoulder any time soon.

Did you participate in NaNoWriMo this year? If so, what did you learn?