Xbox One X Review: Is Microsoft’s New Console Worth The Money?

Much more powerful, but somehow smaller, than the Xbox One S released last year, the Xbox One X is a marvel of technology and engineering that provides the most technically impressive console gaming experience you can get, especially if you’re running a 4K TV.

Like the One S before it, the machine can play all Xbox One games, plus select Xbox 360 and original Xbox games, and can also handle streaming media and Blu-Ray discs at up to 4K resolution and high dynamic range (HDR). Unlike the S, though, the $650 X is powerful enough to run games at a full native 4K resolution — that’s 3840 x 2160 — for insanely sharp and detailed images.

That’s an impressive feat for an unassuming matte black box that measures six centimetres tall by 30 centimetres wide, and weighs less than four kilograms, and while overall the machine’s convinced me it’s a worthwhile upgrade there are some caveats.

The X obviously can’t take a regular Xbox One game designed to run at 1080p and bump it to 4K and HDR, so it’s up to each individual game to support the new formats. Some games will go the whole nine yards but others might do HDR and sub-4K resolution, some will use complex processing to bump up to a quasi-4K, while others might just stay 1080p and SDR. By the same token, some developers will opt to use the console’s extra horsepower to improve framerates and fluidity, or add higher resolution textures, better AI or more advanced graphical flourishes.

Essentially this platform is providing the tools, but it’s how game developers use them that will determine the quality of your experience. Some upgrades, like a faster 1TB hard drive for better loading times, will of course apply automatically.

This means the machine faces a similar problem to that faced by Sony’s 2016 PlayStation 4 Pro, where players might not be sure what they’re getting in a game that’s specifically “enhanced” for the new console. But I’m a little more satisfied with the Xbox than I was with the Pro, for three reasons.

For starters it’s just more powerful, which gives me confidence that the big games — many of which also come to PC and so are fairly scalable — will be able to make decent gains here. A 4K image has four times the number of pixels of a standard 1080p image, yet in terms of graphics processing the PS4 Pro only represents a 2.3 times increase over the standard PS4.

The X also features a beefy 12GB of RAM, with 3GB set aside for the operating system. This means the amount of RAM able to be utilised for games on One X — 9GB — is equal to the entire console RAM of the PS4 Pro, which puts aside 3.5GB for system use for a total of 5.5GB for games. 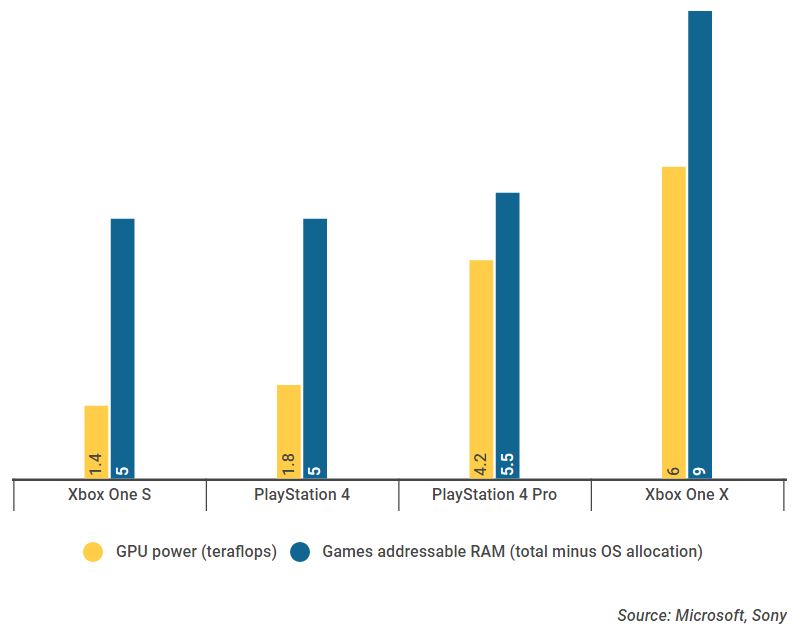 Secondly, Microsoft has sought to be more transparent when selling games, with new icons appearing on physical boxes and in the digital store to indicate if a game outputs in 4K, supports HDR and/or has other special One X specific features. It’s still vague, but it’s nice to be able to see at least basic information about the per-game upgrades at a glance.

Finally, players can filter the games installed on their console to see only the ones given specific X enhancements, and as updates drop in the pre-release period I’ve been pleased to see several games I already own occupying this space. Obviously this is a benefit gamers will only see after they’ve already bought the machine, but compared to the PS4 Pro — where I have to Google to see if and when games support the more powerful tech — it’s a nice touch. You can see a rolling list of the games getting X updates here, although those with slow internet or data caps should be warned that these updates can be substantial. The largest I’ve seen so far was pushing 90GB. For this reason, a good-sized external hard drive is a must as well.

So, how much of a difference can the X make to a game that’s been fully enhanced?

For a fairly non-scientific test, I took Gears of War 4 — a game that has been updated to fully support the new machine — and played through the same section four times on both an S and an X, and both a standard 1080p TV and a 4K set.

The S on the standard TV provides the baseline experience, a good-looking 1080p image. Moving to the 4K TV (which in my case was also a substantially bigger TV), the exact same image is blown up so I could spot more detail, but it also amplified the aliasing (shimmery, jagged edges) and muddied the textures somewhat. Still a great-looking game, and the S supports HDR on new TVs so colours pop and explosions flash brightly in the darker areas.

Using the X on the standard 1080p TV, I immediately noticed the difference over the S. The game uses ultra high definition textures and renders on the machine at 4K before sub-sampling down to 1080p, and the result is a much more detailed image and minimal aliasing. All the non-resolution benefits were clearly on display as well, which for Gears 4 includes crazy new lighting effects, reflections and shadows, plus the option to forego the 4K rendering for a fast frame-rate (up to 60fps, compared to the usual 30fps).

Of course, hooking the X up to the 4K TV provided the best experience, with the cartoonishly rugged protagonists now sporting visible pores and stubble and everything from weapons to enemy armour rendered razor sharp.

Forza Motorsport 7, another upgraded game, runs at a native 4K and a solid 60fps, with the whole thing looking much cleaner and more believable than in 1080p. Switching to a cockpit view, all the tiny dials and instruments are now clearly visible, as are details like stitching in the leatherwork.

These are Microsoft-published games, and so probably offer a best case scenario in terms of existing games being upgraded to 4K, but at the very least it’s clear the X can pull it off confidently. Many existing Xbox One exclusive games will be getting the bump to 4K, but it’s encouraging to see third party developers planning upgrades for previously released games too, including for The Witcher 3, Titanfall 2 and Final Fantasy XV.

The real value should come in new games that took 4K, HDR and the extra horsepower into consideration during development. Recently released games including FIFA 18 and Assassin’s Creed Origins look stunning in 4K compared to the 1080p versions that run on the S (and of course they should look improved on standard HD TVs as well).

I was excited (although a bit bemused) to see X updates install for Halo 3 and Oblivion, two Xbox 360 games I’ve had sitting on my shelf since the mid 2000s. Because 360 games run on Xbox One via software emulation, select games will perform better, have increased colour depth and see a nine-times increase in pixel count on X. Indeed, sliding the old discs in I found both these games looked incredibly clean. This is an unexpected and interesting use of the extra power, and I hope we see more of it. (At present only four 360 games are upgraded, the other two are Assassin’s Creed and Fallout 3.)

In terms of the experience outside of gaming the X is virtually identical to the S. There are some new features, like 4K video recording (and, if your internet can handle it, streaming), but the apps and operating system are the same.

So should you get the Xbox One X? While it’s doubtless the most powerful console on the market, and the most affordable way you’re going to get most big games in 4K (you’re never going to build a 4K gaming PC for $650), it’s still very much a luxury and not a necessity. Great games are still great without the extra juice, as evidenced by the difficulty I had at times pulling myself away from Super Mario Odyssey — a game I was playing on a 720p screen — to test 4K games for this review.

By the same token the standard HD versions of Xbox One games — and of course recent PlayStation exclusive stunners like Horizon Zero Dawn and Uncharted: The Lost Legacy — can look almost as good as a game with a full-featured X upgrade.

For existing Xbox One owners, then, the upgrade here is captivating, but non-essential. For now at least, you can continue playing on your current console and know your games will be upgraded if you get the X down the line. For newcomers, I’d recommend seriously considering the X over the cheaper S if you can afford it and have (or are planning to get) a 4K TV, as the proposition will only get more attractive as more games hit.