What operating system do you use? For some, that question may as well be posed in Latin or Sanskrit. For others, it’s an invitation to have a heated debate about the benefits of GUI vs. command line, modern day UI vs. old school metaphor, the pros/cons of Windows 10, LAMP vs. IIS… the list goes on and on. For most, however, the answer will be a variation on Windows or Mac.

But anyone that has used Windows (in any of its incarnations) long enough knows, at some point, frustration will rule the day, and you’ll be working along and, seemingly out of nowhere, Windows will decide to apply updates and restart, putting your work at risk while you go through the lengthy process of applying updates and rebooting. Or what about the inevitable virus or malware?

You spend precious dollars on antivirus software or, worst case scenario, you have to send the machine to your local PC repair to get the virus removed. All the while, work is not being done. While Apple’s macOS products suffer less from the vulnerabilities found in the Windows platform, they also come with a fairly hefty price tag.

There is, however, another alternative to both that doesn’t cost any money to download and install, and is far more immune to viruses and malware. That operating system is Linux. What is Linux? Let’s take a look.

So what exactly is it?

Linux came about in the mid-1990s, when then-student Linus Torvalds was tasked with creating a disk driver so he could read the Minix file system. (Minix is a POSIX-compliant, UNIX-like operating system that saw its first release in 1987.) That project eventually gave birth to what would come to be known as the Linux kernel.

The kernel of an operating system is an essential core that provides basic services for all aspects of the operating system. In the case of Linux, the kernel is a monolithic, UNIX-like system which also happens to be the largest open source project in the world. In the most basic terms one could say, “Linux is a free alternative to Microsoft Windows and macOS”.

Linux is a ‘can do’ platform

Five years ago, each of those tasks would have been handled via a different application. Now, not so much. Modern computing tasks are most often relegated to a browser. Facebook, Google Docs, Netflix, Outlook 365… they’re all used within the likes of Chrome, Firefox, Safari, or Internet Explorer. Each one of those browsers does a good job of enabling the user to do their thing. It’s only on very rare occasions that a user will land on a site that will only work with one of the above browsers.

So considering that the average user spends most of their time within a browser, the underlying platform has become less and less relevant. However, with that in mind, wouldn’t it make sense to use a platform that doesn’t suffer from the usual distractions, vulnerabilities and weaknesses that plague the likes of Windows? That’s where Linux shines. And with Linux being open source, users are not only able to use the platform for free, they can also alter and re-distribute the operating system as their own distribution.

While the average user might not be concerned with the option to make alterations to their OS, this functionality of Linux helps to explain why this operating system doesn’t cost you anything. Linux is an open source platform, meaning that the code is available for anyone to download, change and even redistribute. Because of this, you could download the source code for the various elements that make up a Linux distribution, change them and create your very own distribution.

And as for that distribution, this is very often a point of confusion with new users. As mentioned above, Linux is really just the kernel of the operating system. In order to actually use it, there are layers that must be added to make it functional. The layers include things like:

Developers will sometimes adapt those layers, to achieve a different functionality, or swap out one system for another. In the end, the developers create a unique version of Linux, called a distribution. Popular Linux distributions include:

Getting to know a different kind of desktop

One of the biggest variations you will find between the different Linux distributions is the desktop environment. Most users know what both Windows and Mac desktops look like. You might be surprised to find there are some Linux desktops that look and behave in a very familiar fashion.

Others, however, offer a rather unique look and feel. Take, for instance, the GNOME desktop (pictured below). This very modern user interface does a great job of ensuring desktop elements are rarely (if ever) in the way, so that interaction with applications takes focus. It’s a minimal desktop that delivers maximum efficiency. 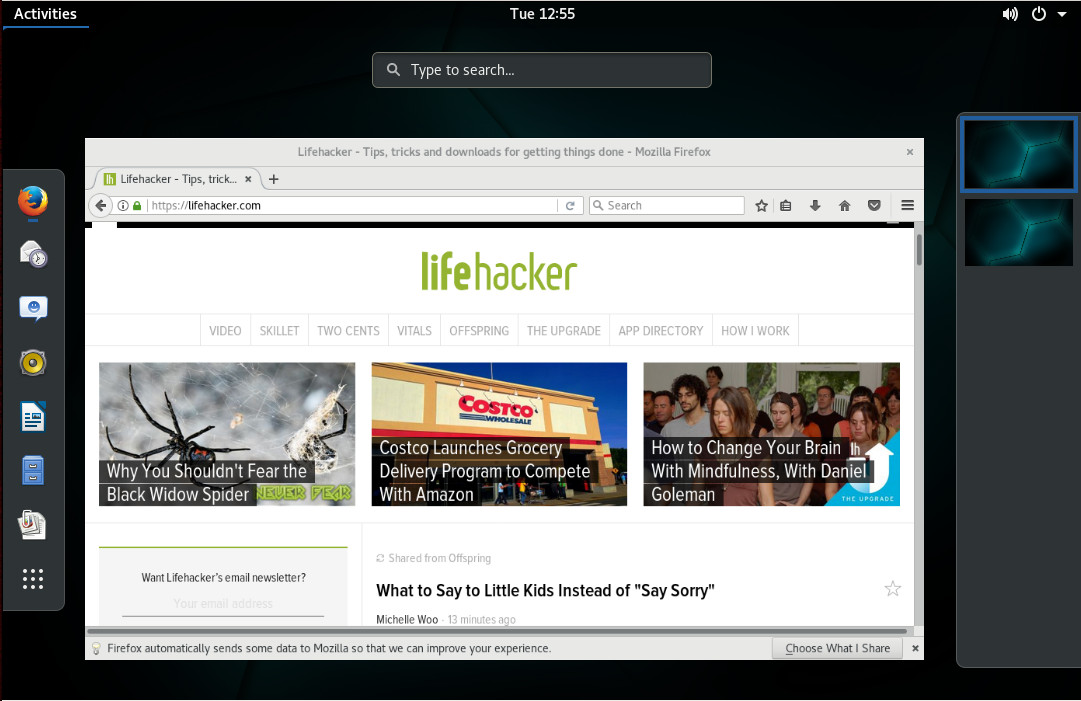 The GNOME desktop as seen on openSUSE, showing the activities window.

But what exactly is the desktop? In very basic terms, the desktop is comprised of pieces like the Apple menu, applications menu, menu bar, status menu, notification center, clickable icons, and some form of panel (or dock). With this combination of elements, the desktop makes it very easy for the user to interact with their computer.

Every desktop contains a mixture of these parts. Linux is no exception. With the aforementioned GNOME, you have the GNOME Dash (which is like the application menu), the top bar (which is like the Apple menu bar), a notification centre and can even (through the use of extensions) add a customisable dock. Without a desktop environment, you would be relegated to the command line; trust me, you don’t want that.

The most popular Linux desktop environments are:

There are a number of other desktop options, but the above tend to be considered not only the more popular, but user friendly and reliable. When looking into desktops, you’ll want to consider your needs. For example, the KDE desktop does a great job of functioning like Windows 7.

Cinnamon and Mate are similar, but less modern looking. Xfce is a very lightweight desktop, so if you have slower hardware, it makes for a great solution. And again, GNOME is a minimalist dream, with very little getting in your way of working.

The desktop environment is also where you an interact with applications … which brings us to our most important issue.

Are the application options any better?

This is one area that has been, in the past, a point of contention for Linux. If you ask any dyed in the wool Windows fan/user, they will tell you, just like with macOS, you cannot run Windows applications on Linux. But that’s not necessarily true.

Thanks to a compatibility layer, called Wine (which used to stand for Wine Is Not an Emulator), many windows applications can be run on Linux. This is not a perfect system, and it’s not for everyone. But it does enable users to run many Windows applications on Linux.

Even without native Windows applications, Linux still has you covered with the likes of:

Linux has tens of thousands of free applications, ready to install. Even better, most modern distributions include their own app stores (such as GNOME Software or the Elementary OS AppCenter) that make installing software incredibly easy. Nearly all modern Linux distribution’s app stores can be found within the desktop menu.

Is Linux for me, and how do I start?

Linux is ready to open up a world of free (and open) software that is reliable, secure, and easy to use. Is it perfect? No. If you happen to depend upon a proprietary piece of software, you might find that Linux (even with the help of Wine) cannot install that application you need. The big question on your mind might be, “How do I find out if Linux will work for me?” Believe it or not, Linux has that covered as well. Most flavours of Linux are distributed as “Live Distributions”.

What that means is you can download the distribution ISO image, burn that image onto either a CD/DVD or USB flash drive, insert the media into your computer (either in the CD/DVD drive or USB port) and boot from that media. Instead of installing the operating system, the Live Distributions run directly from RAM, so they don’t make any changes to your hard drive. Use Linux in that way and you’ll know, pretty quickly, if it’s an operating system that can fulfil your needs.