The Antifa Movement: Its Origins, Tactics And Ideology Explained

Anti-fascist action, more popularly known as “antifa”, can be best described as international socialism on amphetamines. Driven by progressive ideology and “workers’ rights”, it has adopted violence and intimidation as a tactic to quash conservatives and nationalists – in Australia, Europe and, most recently, the US.

Antifa, or militant progressives, have always existed and flourished in democracies. Militant progressives were part of the the 1960s and 1970s counter-culture, and were active during the anti-globalisation protests of the 1990s and 2000s.

It is difficult to accurately state when antifa began. It is more of an evolution of progressive militancy than a birth.

What does it fight for?

Anti-fascist movements can be traced back at least to the 1920s and 1930s. Today, the ideological collective known as antifa evokes the historical struggles of the 20th century against fascists in Italy and Nazi Germany to explain its 21st-century existence.

Antifa believe if anti-fascists had mobilised and crushed fascism before it took root in Europe during the early-to-mid-20th century, then many of that period’s tragedies may have been avoided.

In some ways, antifa’s existence also relies on the political environment of the time. There must be a conservative government in power for it to have traction.

Antifa is a product of progressive thought struggling against conservative or capitalist governments. It would not be enjoying its current prominence. Instead, it would have to content itself on countering the activities of radical nationalist fringe groups.

Antifa ideology features a pro-multicultural agenda, the protection of social and ethnic minorities, and the socialisation of government. The majority of its platform is rather mainstream for contemporary society, and can also be found in the policy platforms on the left of the ALP or the Greens.

For an overview of antifa’s kind of ideology listen to folk musician and activist Billy Bragg. While its ideological platform is not unusual nor remarkable by contemporary standards, its tactics and zealot approach is what gives antifa prominence.

What are its tactics?

Antifa understands how to effectively use technology to further its cause. It enjoys a tech-savvy generation of followers. Its use of political intelligence and social networks is advanced for an issue-motivated group.

Antifa effectively uses social media to organise protests and counter-protests. But it also possesses political intelligence-gathering techniques. It locates and monitors the actions of its opponents, and uses social media to discredit and taunt nationalists and conservatives. Its websites and Facebook accounts provide dossiers on conservatives and nationalist leaders and groups.

Information on people and groups appear, for the most part, to be harvested from the internet. But based on some of its posted pictures of opponents, there is also a hint that antifa followers may conduct surveillance activities. It has a network of followers that know when nationalist protests are planned and the locations of nationalist leaders.

Antifa’s ability to gather information on the whereabouts of its opponents and planned protests gives it a psychological and strategic advantage.

The other tactic antifa uses is political violence. Antifa believes that political violence is justifiable against those it views as fascists or neo-Nazis. It not only justifies it, but antifa also calls on its members to undertake self-defence training.

A desire to train its followers may suggest antifa aims to develop into a quasi-militia to protect progressive views. 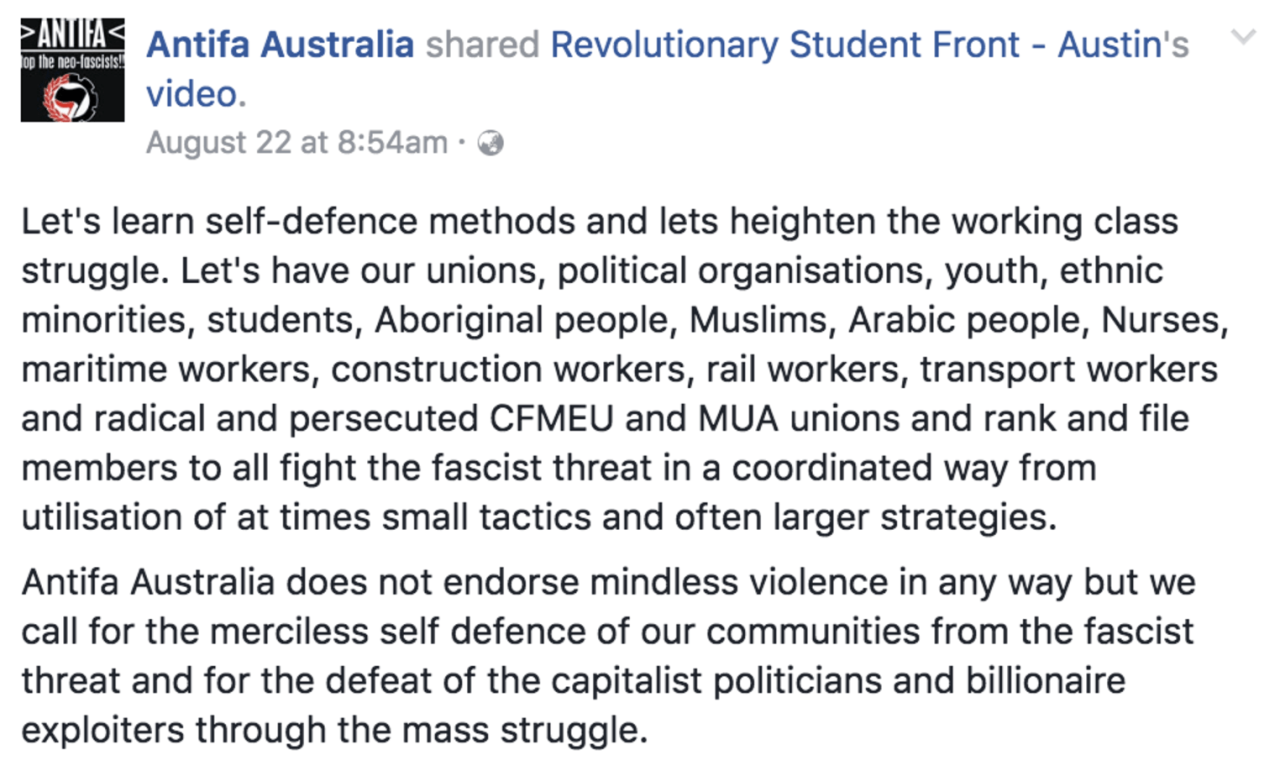 A movement, not a structured group

A distinct feature of antifa is its lack of a structured organisation and leadership. It operates on a loose collective, similar to the online activists Anonymous.

Both Anonymous and antifa are driven by a reaction to specific social, economic or political action that is in contrast to their ideological outlook. Antifa followers come together for a specific counter-protest or civil action then disband again.

Increasingly, this kind of ideologically-driven collective action is becoming the modus operandi of groups that are not necessarily organised by leadership – but are mobilised by an ideology.

Such an approach is far more potent and able to resist infiltration. Leaders often become the focal point of negative campaigns against any group. The leader is scrutinised, and often their personal reputation is interpreted as the reputation of the entire group. Where there is an absence of leadership or clear organisational structure it becomes more difficult to target the group.

Some have sought to have antifa categorised as a terrorist group. Under the broad definition of terrorism – “the unlawful use of violence and intimidation, especially against civilians, in the pursuit of political aims” – they may have a case. 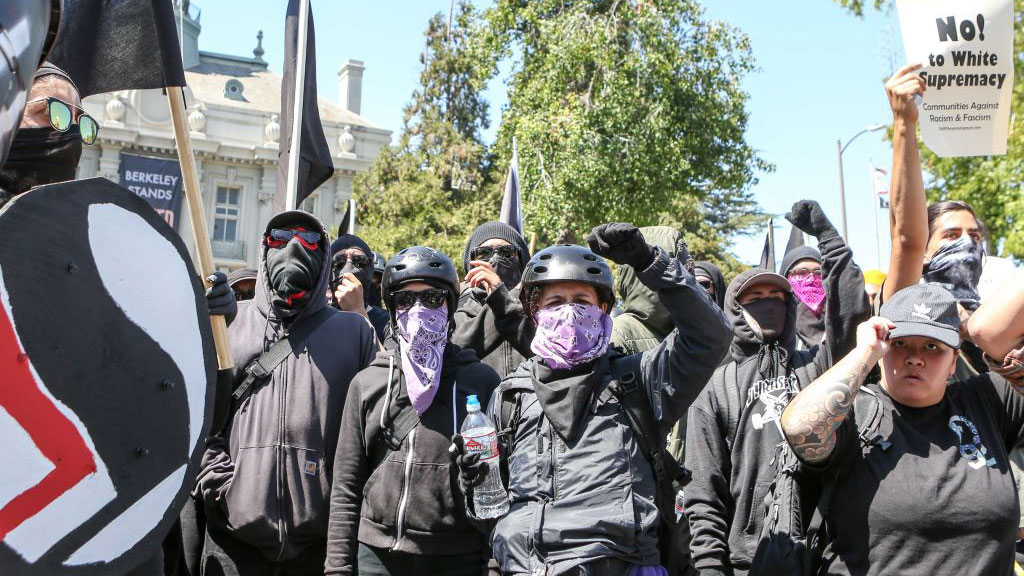 With respect to interpretation and definitions, it is also questionable how antifa interprets fascism. It is likely antifa is mistaking some conservatives and nationalists for fascists. The general understanding of fascism:

… is that of extreme authoritarian, oppressive, or intolerant views or practices. Specifically, an authoritarian and nationalistic right-wing system of government and social organisation.

It would be hyperbole to describe Australia’s mainstream political environment as fascist.

Essentially, antifa is part of a larger schism taking place in democratic societies. Increasingly, there is greater intolerance for opposing views and an inflexibility or desire to achieve compromise.