Explained: Why Guam Is Important Enough To Be In North Korea’s Crosshairs 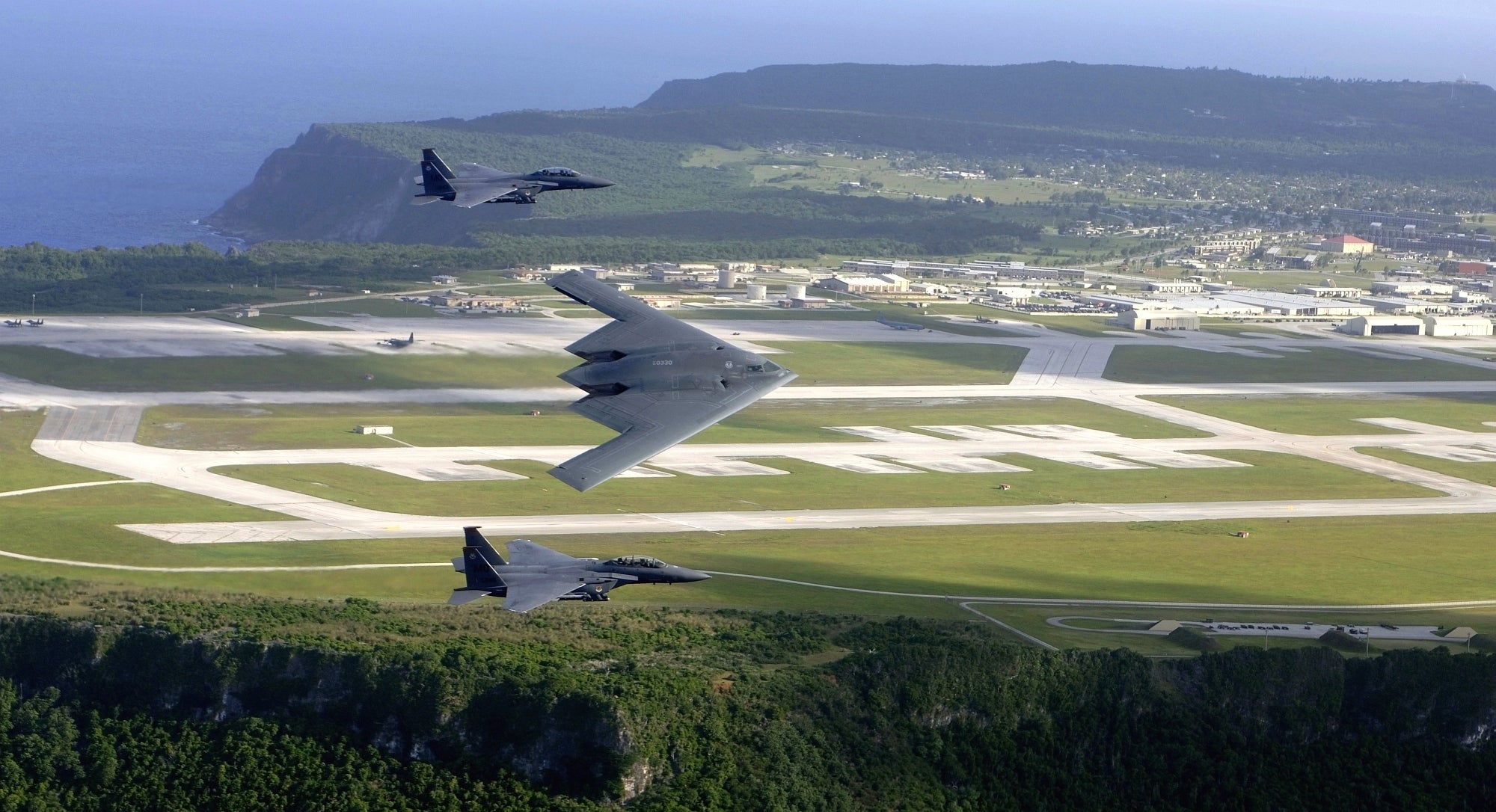 Following promises of “fire and fury” from US president Donald Trump if it continues its belligerence, North Korea released a statement on Wednesday threatening to launch an “enveloping strike” at the island of Guam, a US territory in the Pacific. Here’s why Pyongyang thinks Guam is a worthy target.

President Trump Moves Doomsday Clock To Half Past 'Oh My God'

After The Washington Post reported that North Korea is believed to have successfully miniaturized a nuclear weapon to fit inside its functioning missiles, President Trump addressed the news while speaking to reporters Tuesday afternoon. There was absolutely nothing reassuring about his comments.

This was not the first time North Korea has threatened Guam, but this threat was no doubt the most specific yet.

The statement was released through the official North Korean news agency, KCNA and reportedly came from General Kim Rak Gyom, the commander of the Strategic Rocket Force of the Korean People’s Army. It said North Korea is “seriously examining” the possibility of launching four Hwasong-12 intermediate range ballistic missiles toward Guam.

While the preparations are now underway, a decision will not be made for several weeks as the leader of the Hermit Kingdom, Kim Jong-Un, will make the final decision whether to carry out the mission.

This war of words comes on the heels of reports that North Korea has moved much further ahead in its ability to weaponise their rocket forces with nuclear weapons in recent months.

On Tuesday, it was reported that North Korea had successfully miniaturized a nuclear warhead small enough to be mounted to a ballistic missile. If the intelligence reports are to be believed and are accurate, North Korea has pushed past a key milestone in their frantic race to develop a nuclear weapon capable of threatening the continental United States.

According to the Washington Post, this recent report was prepared by the Defence Intelligence Agency, the Pentagon’s intelligence branch, and it comes on the heels of another report indicating that North Korea may be in possession of as many as 60 nuclear warheads.

A South Korean soldier on a Seoul subway watches a news report on North Korea’s threat to Guam. Getty Photo

Guam is a tantalising target for North Korea. The tiny Western Pacific island is home to about 160,000 people and nearly 7000 US military personnel and that number will only grow as the US is planning on relocating thousands of Marines from the Japanese island of Okinawa to Guam in the coming years.

Part of the Mariana Islands chain, Guam is closer to Pyongyang than it is to Hawaii, with only 3540km separating North Korea from Guam.

Andersen Air Force Base on Guam has been a temporary home for American bomber forces in the region since 1944. In fact, the recent B-1B flights along the Demilitarized Zone (DMZ) have originated from Guam. These flights have gotten under the skin of the North Koreans, as another statement from KCNA this week specifically addressed the B-1B flights “which get on the nerves of DPRK and threaten and blackmail it through their frequent visits to the sky above Korea.” 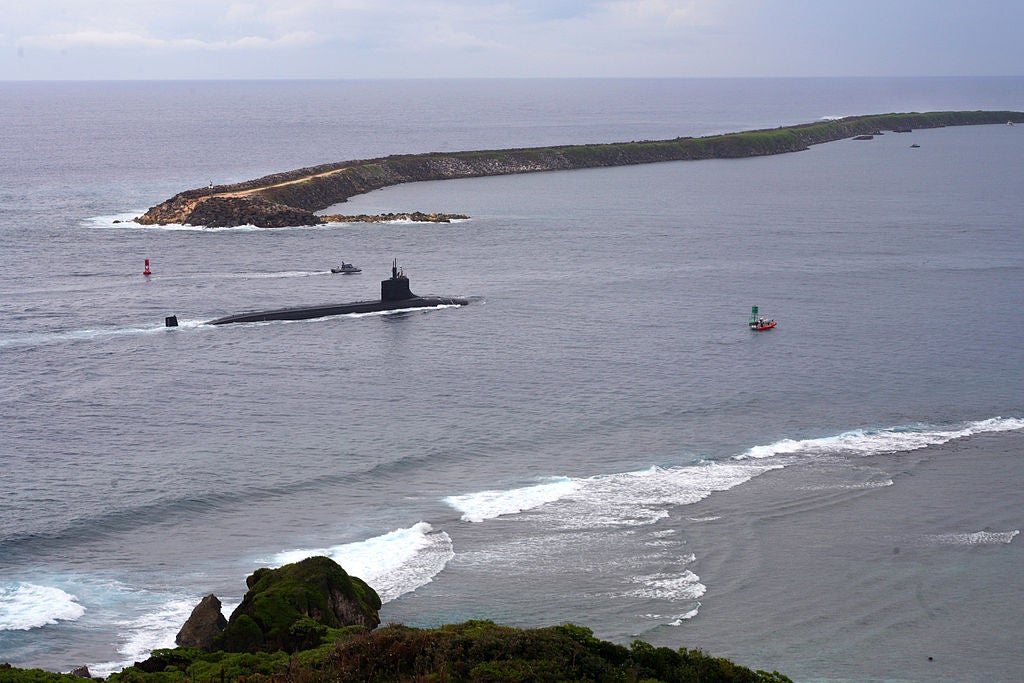 USS Seawolf (SSN 21) arrives in Apra Harbour, Guam for a port call during a Western Pacific deployment. US Navy Photo

Guam is also home to Naval Base Guam, which sits aside Apra Harbour and is the home to the four forward-deployed fast-attack nuclear-powered attack submarines of Submarine Squadron 15. The four subs are all equipped with vertical launchers to fire Tomahawk missiles. Two submarine tenders and several Coast Guard vessels are the remaining permanently-based American ships, though Apra harbour is a frequent port-of-call for deployed American warships.

Defending Guam is Task Force Talon, which operates the Terminal High Altitude Area Defence unit, or THAAD. The THAAD anti-ballistic missile battery is designed to intercept short, medium and intermediate range ballistic missiles in their terminal phase which is either during descent or reentry.

The THAAD missile is essentially a bullet designed to hit another bullet, and the THAAD operators on Guam clearly understand their mission is directed towards North Korea. In fact, the unit’s nickname is the Musudan Manglers, named after one of North Korea’s intermediate-range ballistic missiles. 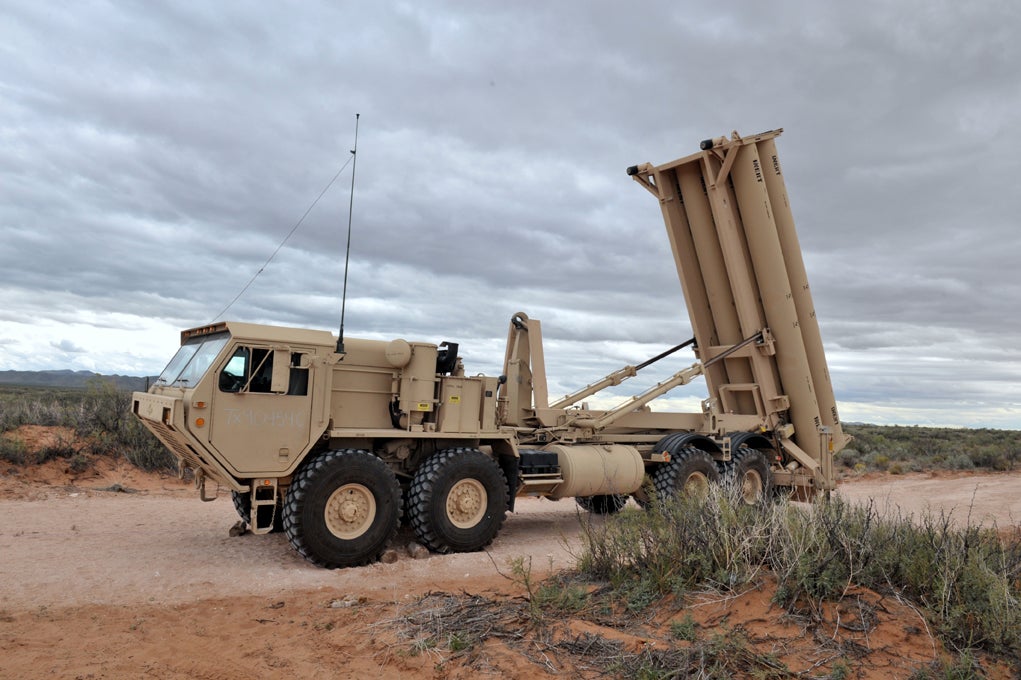 A US Army THAAD launcher similar to the ones on Guam operated by Task Force Talon. US Army photo

With amazing specificity, the North Korean statement detailed the flight path their missiles will take as they streak toward Guam, making no apologies for planning to fly them over Japan. If this goes according to plan, the Hwasong-12 will launch from North Korea and fly over the Japanese Prefectures of Shimane, Hiroshima, and Koichi. After travelling about 3380km, the missiles will land somewhere between 19 to 38km away from the island of Guam.

The wild card is whether the Hwasong-12 can even hit Guam if North Korea tried. Here’s what experts told Business Insider:

But North Korea mentioned a specific missile, the Hwasong-12, that it has tested just once, and an expert contacted by Business Insider says hitting the US military in Guam would be easier said than done.

“No one, not even the North Koreans, knows the CEP of the HS-12,” Mike Elleman, the senior fellow for missile defence at the International Institute for Strategic Studies, told Business Insider, referring to circular error probable, or the distance by which a missile can be expected to miss its target.

“Having said that, we can guesstimate a minimum CEP from first principles,” Elleman said. Essentially, even a small task like cutting off the engines a fraction of a second too late can make the missile go miles off course.

“All told, the CEP will be greater than [5km],” Elleman said. “But this is a very rough estimate. Given the paucity of flight tests, I suspect if used today, the HS-12 would have a CEP considerably larger than [5km], perhaps [10km], or more.”

But while not a direct threat to attack the island and the US military forces stationed there, should the North Koreans go ahead with the “test” to target the waters near Guam, it will only further escalate the tensions in the region. A test like this is fraught with danger and the potential for miscalculation is uncomfortably high.

The current crisis, while long-simmering and unfortunately never effectively dealt with by previous administrations, is currently being driven by a clash of personalities that are not best suited to diplomatic endeavours and careful consideration.

North Korea is a habitual line-stepper, always pushing the boundaries of what’s allowable by the international community. Look at 2010, for instance, when two incidents perpetrated by North Korea proved just how far they were willing to go to see what they could get away with. 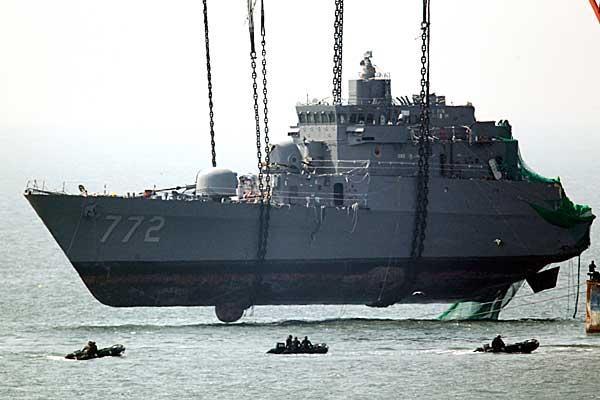 The bow section of the ROKS Cheonan as it was raised after being hit by a North Korean submarine- launched torpedo. South Korean Navy photo

The most damaging incident occurred on March 26, 2010, when a North Korean submarine sank a South Korean warship, the ROKS Cheonan. The ship was hit by a torpedo and broke in two, killing 46 sailors. South Korea did not respond to the North’s aggression.

Playing With Fire, And Fury

Gambling on what the world’s response would be to firing missiles near Guam would be the most dangerous bet North Korea has ever made.

This time the proposed action by North Korea surely would not go without a response, and by directly flying over Japan as their announcement indicates, this event would be highly provocative to not just America and South Korea this time. It is guaranteed that Japan, being the only nation ever to be attacked with nuclear weapons, would be less than thrilled to have four nuclear-capable missiles fly over their nation.

Flight corridor over Shimane, Hiroshima, and Koichi Prefectures of Japan should DPRK conduct test they have put forwards. pic.twitter.com/AkqvumAkxG

Still, there are no good outcomes here. If the United States along with its South Korean and Japanese allies simply condemn the missile launches, North Korea will see it as another victory and become further emboldened.

Should the US attempt to intercept the Hwasong-12 missiles, the situation is also a potential disaster. If America could somehow intercept all four missiles, this could motivate North Korea to work harder at defeating ballistic missile defences the US has spent years and billions of dollars developing, or simply recognise the ability to overwhelm the system and produce larger number of missiles to ensure some weapons get through.

If the missiles are fired and the US is not able to intercept any, or all, of them this opens up another debate regarding the time and money spent on these systems which have had only mediocre performance in highly controlled test environments.

North Korea must be bluffing with this latest threat. Regardless of what fantasy world Kim Jung Un lives in there can be no illusion among the leadership in Pyongyang how this action would be perceived.

North Korea’s leadership is focused on one thing: survival. The fear of regime change and the loss of power has motivated North Korea to develop nuclear weapons and starve its population as it continues to practice autarky in a very connected world. A war on the Korean Peninsula would result in the loss of millions of lives and the prospect of nuclear war clearly exists. Fiery words and harsh rhetoric do nothing to step away from the brink.

This story originally on Jalopnik.