How To Help A Kid Who’s Shy

kidsoffspringparentingshyness
To sign up for our daily newsletter covering the latest news, hacks and reviews, head HERE. For a running feed of all our stories, follow us on Twitter HERE. Or you can bookmark the Lifehacker Australia homepage to visit whenever you need a fix.

It’s absolutely OK for children to be naturally introverted — quiet kids possess unique creative and intellectual talents and have rich inner lives. But what do you do when a child seems shy and fearful of the world outside her home?

While she’s opened up tremendously over the past six months, my four-year-old daughter used to be very shy. I’ve sat through entire play dates with her face nuzzled in my chest (seriously, worst wing-child ever for trying to get to know other parents), left swim and dance classes because she wouldn’t detach from my leg, and spent a lot of time worrying that by not participating or engaging, she’s missing out.

There are ways for adults to help children feel more comfortable, more themselves, in social environments where they may seem uncertain. Here’s what I’ve learned so far.

I don’t let my daughter hear me say the words “she’s shy” if anyone asks why she isn’t talking at the moment — usually, other little kids. When children hear that label, they internalise it, and then act from it. William Sears, the paediatrician and author of multiple baby advice books, writes, “Some children hide behind the shy child label so they don’t have to reveal a self they don’t like. It’s safer not to show anything, so they retreat into a protective shell. The ‘shy’ label becomes an excuse for not developing social skills and a reason for not exercising them.”

So what can we say instead? I often go with, “She’s feeling quiet right now” — we all do sometimes, right? In How to Talk so Little Kids Will Listen: A Survival Guide to Life with Children Ages 2-7, authors Joanna Faber and Julie King write about their own “magic words”.

They suggest saying, “He’ll join you when he’s ready.”

It may not sound like much, but those three little words do a lot of work. They tell a child that you respect his feelings and his need to go slowly. They also let him know that he’s in charge. He’s not being pushed. But the most important part is what you’re not saying. You’re not keeping him stuck in a role. Dad said I’m shy. I must be shy. I’d better stay behind his legs where it’s safe.

Instead you’re issuing an invitation. You’re protecting him while he’s feeling uncomfortable. But the door is left wide open. He can ease into the activities without fanfare, as soon as he’s ready. The readiness often comes quickly as soon as the pressure is removed. 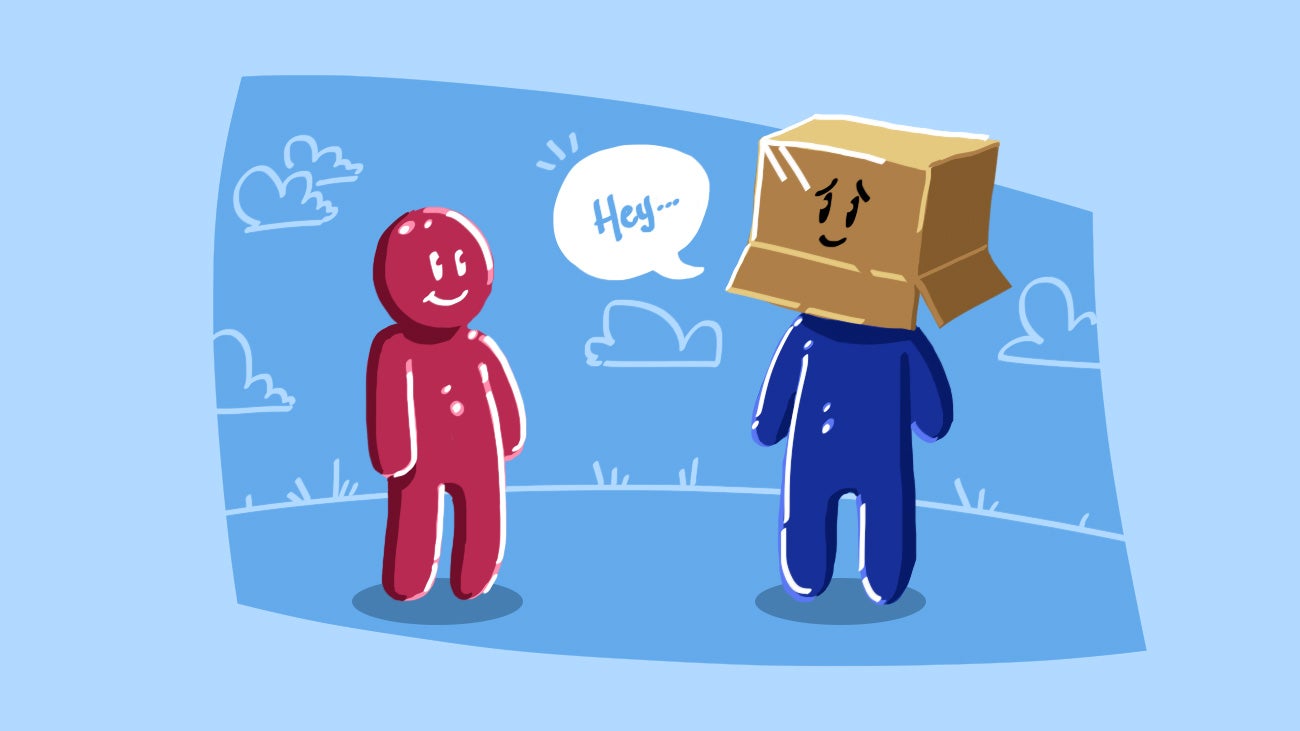 I once showed up to a party alone, before any of my friends arrived. Instead of mingling, I hid in the bathroom to kill time and avoid talking to strangers. Embarrassing but true. For a shy person, social interaction can be a stomach-churning, anxiety-filled experience. It was for me, but I was able to get it under control with some work and become comfortable talking to strangers.

Big social events can be very overwhelming for my daughter, so I like to prepare her by telling her who will be there, especially if she’ll be encountering many people she doesn’t know. I’ll say, “You’ll meet Daddy’s cousins from Maryland,” and show her a picture.

I’ll tell her that I expect her to greet them because it makes them feel good, and give her a list of options: Say hello, wave hi, or give them a high-five. Before, she would hide behind my legs whenever someone talked to her, and it made me stressed and sweaty. Giving kids a limited number of choices helps them gain confidence and a sense of control. In this case, my daughter used to always choose to wave, but now she often smiles and says hi.

Tag Team with an Extroverted Friend

Spending a lot of one-on-one time with a few close friends is helping my daughter flourish socially, and that feels like freedom. She’s her funny, dramatic, inquisitive self — not just at home with me and my husband, but with an expanding tribe. These days, on play dates, I won’t see her for hours at a time because she and the friend will be off having a tea party in a tent or bouncing on a trampoline. Her best friends are more extroverted, and when she’s with one of them, she’ll try new experiences that I don’t think she would have otherwise, like singing in front of a group of people or joining a parkour class. For quiet kids, there’s power in twos.

Bring Along a Favourite Toy or Activity

When going to gatherings, I’ll sometimes let my daughter bring along a puzzle, game or colouring book that she can play with by herself if she’s feeling overwhelmed. Usually, it will spark the curiosity of the other kids there, and she can teach them how to play or hand out some crayons. Other times, it’s nice for her to bring along a memento from a recent holiday that she can talk about. She likes to wear these furry wolf ears that she got from the Great Wolf Lodge waterpark hotel, and they have been an instant conversation starter.

To support quiet kids, parents need to learn how their brains work. A great resource is the Quiet Revolution website, part of Susan Cain’s movement to empower introverts. It explains that quiet children sometimes shut down when meeting people for the first time because they have a “long runway”, a need for an extended period of warm-up time. Understanding this gives me more patience. When my daughter finally reaches the end of her runway and takes off into chatter or giggles with a new friend, I relax and smile.