15 Horror Movies You Need To Watch This Winter 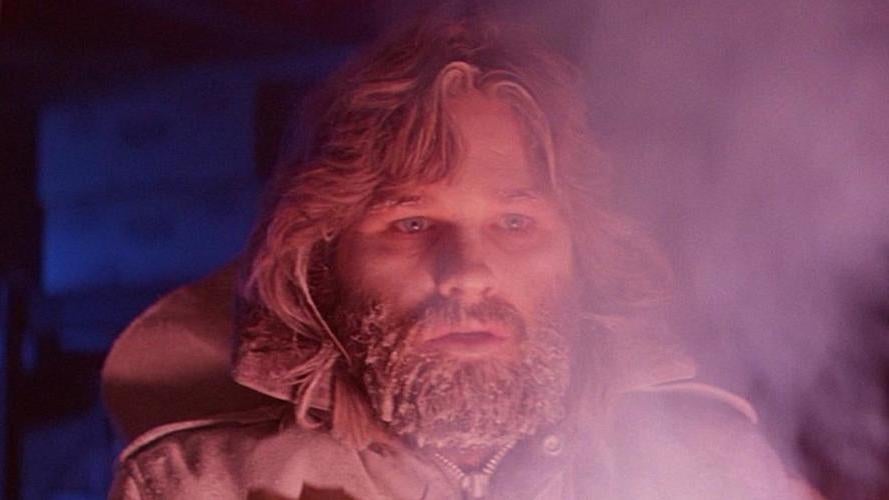 John Carpenter’s The Thing, which turned 35 last month, is always the first movie we turn to any time we feel like watching something both figuratively and literally chilling. But it’s by no means the only great horror film set in freezing conditions. Hide under the blankets this winter with these 15 great horror flicks set in the freezing cold.

Just a few months after establishing himself as a Hammer superstar in The Curse of Frankenstein, Peter Cushing returned to the big screen in 1957 for the studio to take on a very different monster — one that lurks high in the Himalayas. He plays a way more benevolent scientist here, while Forrest Tucker plays the bad-dude doctor with Yeti exploitation on his mind. Most of The Abominable Snowman was shot on a set, but special effects and location shots of actual mountains help establish that “the man-beast of Tibet” indeed dwells in a harsh, remote place.

Posed as a prequel to Carpenter’s film, this version of The Thing is set at the Antarctic Norwegian research base that first encounters the shape-shifting space monster — you know, before it transforms into the dog that scampers toward MacReady and company over at US Outpost 31. The cast is mostly actual Scandinavians (including Kristofer Hivju, who’d move on to other cold-arse locations as Tormund Giantsbane on Game of Thrones), though Mary Elizabeth Winstead gets top billing as an American palaeontologist summoned to investigate the team’s mysterious discovery in the ice. It’s a decent monster movie, but the plot is more or less identical to Carpenter’s 1982 film (which needed no improving upon in the first place), and it must be noted that the newer film’s special effects are way less awesome.

Kate Beckinsale plays a US Marshal toiling in Antarctica who takes on one last case before her much-desired retirement. (She also gets a shower scene that’s way more eye candy than Psycho homage.) Of course, it’s a spooky murder mystery that turns out to be way more complicated than it first appears — and the cruel winter elements only make things more dangerous. Though Whiteout is more of a suspense thriller than a horror movie, it makes good use of its isolated environment, and gets points for containing a very cringe-inducing frostbite/amputation scene.

The mood of one extended family’s Christmas holiday shifts from winter wonderland to gruesome hellscape when all the young children become infected with a virus that turns them into vicious monsters. The parents don’t really understand what’s happening at first, because who wants to admit that their offspring have become literal little monsters? And then, once the truth can’t be denied, who wants to fight their own tot to the death? Though it’s set deep in the snowy countryside — truly, the perfect place to stage a horrific sledding “accident” — the plot might actually be the coldest part of The Children.

Is there any other movie quite like 1999’s Ravenous? Its tone of pitch-black comedy and themes of cannibalism and Native American mysticism mesh weirdly well with its historical military setting (an icy outpost in the Sierra Nevadas, circa 1850-ish) and its gloriously offbeat cast, which includes Guy Pearce, Jeremy Davies, Neal McDonough, Jeffrey Jones and David Arquette. Robert Carlyle, of course, plays the bloodthirsty guy you’d least want to be stranded with in any type of survival situation, much less one involving the demon-driven consumption of human flesh.

Any time you have a situation where the sun disappears for a long period of time, you’re going to have to consider the possibility of vampires. That’s what happens in 30 Days of Night‘s small Alaskan town, which becomes infested during the region’s annual extended polar night. Produced by Sam Raimi and directed by David Slade (who’s helmed multiple episodes of American Gods and Hannibal), 30 Days is the rare horror film that actually lives up to its clever premise — no doubt bolstered by its origins as a well-received IDW comic book. Danny Huston, last seen conspiring with Doctor Poison in Wonder Woman, makes an eerie impression as the dead-eyed head bloodsucker.

Around the time of her breakout in The Devil Wears Prada, Emily Blunt made this twisty, Twilight Zone-ish tale about a New England university student whose road trip home for Christmas gets very sinister and surreal. First, the weather report warns of a dangerous incoming storm; then, the guy she’s doing the ride-share with reveals he’s kind of a creep. However, those concerns are soon eclipsed by the horrors that await when the duo takes a shortcut that leads them down a very haunted highway. Never get off the main road, kids — or you might find yourself in a situation where freezing to death is the most pleasant option.

There’s nothing Disney about this Frozen, about a trio of skiiers mistakenly stranded on a ski lift after the resort shuts down ahead of a perilous snowstorm. It’s a lean set-up that resembles diving horror movie Open Water, but instead of being stranded in the ocean, the kids are suspended high above the ground in the punishing cold… and instead of sharks, they’re being stalked by hungry wolves. Both films, however, prey on the “left behind” fear that may make you rethink your next holiday destination; this one’s just way, way, way colder.

A crew of good-looking young Norwegians set out for a mountain getaway, staying in a cabin several hundred snowdrifts away from civilisation. Unfortunately for them, it turns out those abundant snowdrifts conceal a terrible secret: Nazi soldiers, frozen for decades but now furiously reanimated and ready to reclaim their stolen treasure and take out any hot bodies that get in their way. Tommy Wirkola’s splat-tastic film has become a cult classic for a lot of reasons — two words: Nazi zombies — but its deadpan sense of humour lifts it excellently over the top.

#6 The Thing From Another World

The first film to be adapted from 1938 sci-fi novella Who Goes There?, the original Thing movie (which can be glimpsed playing on a TV in John Carpenter’s Halloween) was directed by Christian Nyby in 1951 with help from Hollywood veteran Howard Hawks, whose influence is very evident in the story’s rapid-fire pacing and dialogue. The story differs from Carpenter’s take especially in regards to how the monster reproduces, but there are smaller dissimilar details, too (for one thing, it’s set at the North Pole rather than Antarctica). This Thing is, obviously, also way more bare-bones in the special effects department — but it’s still scary, suspenseful, and great fun to watch.

In the frigid, austere suburbs of Stockholm, Sweden, a bullied boy forms a meaningful bond with an ancient vampire who looks like a girl just his age. Based on John Ajvide Lindqvist’s best-seller (he also penned the screenplay), Let the Right One In spends a lot more time examining human nature than it does hauling out vampire tropes — which ultimately makes for a more powerful story. That said, there’s still plenty of blood-sucking and agony tucked amid all the awakening emotions.

A radio DJ and his crew hold it down on the air as a zombie outbreak ravages their Ontario town during a blizzard. The cause? An apparent virus within the English language. If Pontypool — based on the book Pontypool Changes Everything by Tony Burgess, who also adapted it for the screen — sounds bizarre, it definitely is. It’s also quite original (though it does borrow some from Orson Welles’ legendary War of the Worlds broadcast) and weirdly funny.

Things start going very, very wrong for a group of Arctic oil drillers in Larry Fessenden’s cult thriller — but is it due to a natural causes… or supernatural ones? Inevitably, the survivors begin to turn on each other with increasing fervour as the Earth itself seems to start claiming lives, but intriguing characters (played by Ron Perlman, James LeGros, Connie Britton and others) and a unique plot make The Last Winter an especially effective terror-in-isolation tale. 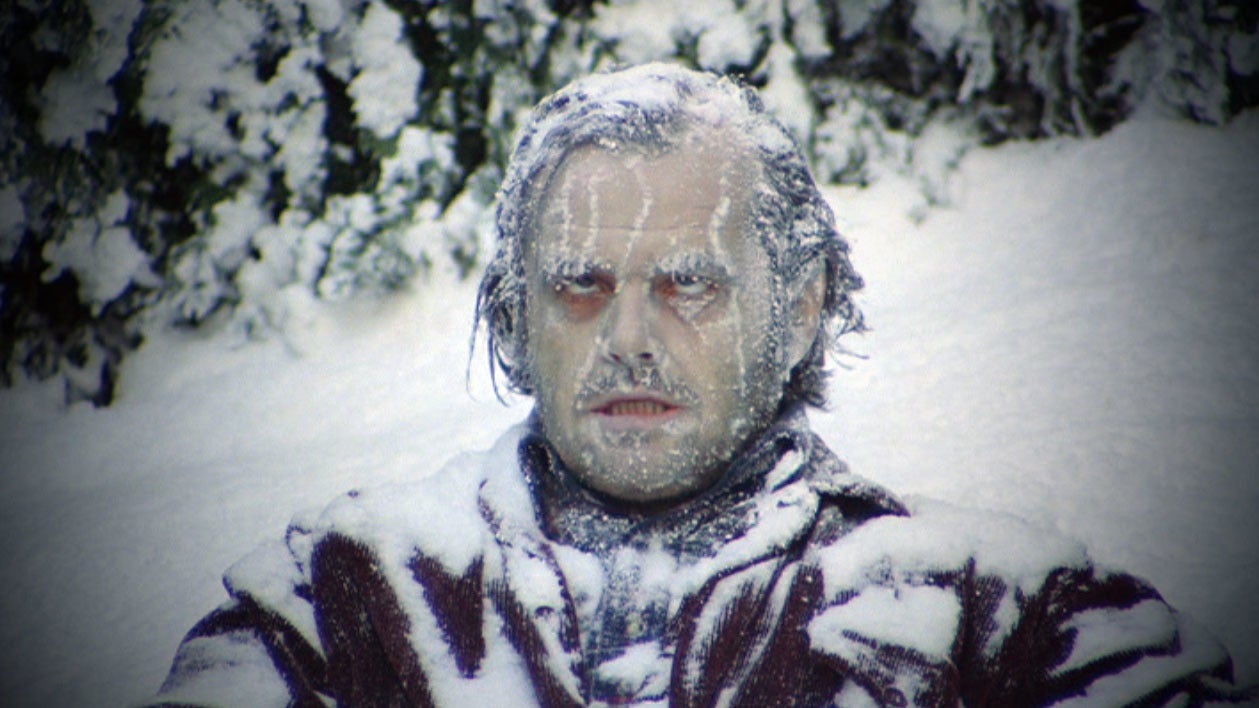 Stanley Kubrick’s classic begins with struggling writer Jack Torrance’s job interview to serve as winter caretaker for the sprawling Overlook Hotel. He’s specifically informed about the “tremendous sense of isolation” that can happen when a person is tucked away from the world for a period of months, but he’s confident he can handle it (plus, he’s desperate for the gig). Jack isn’t warned about the resident malevolent spirits, but he meets them soon enough, and a complete mental breakdown soon follows. There aren’t too many ways to escape the Overlook in the dead of winter, especially when your radio and your snowmobile have been destroyed by a madman, but even a madman can’t ignore the cold forever.

“First goddamn week of winter.” Like we said, it’s our favourite.