Apple’s iCloud has a long and troubled past, but the company keeps pushing it for iPhone and Mac users with every new operating system update. Don’t be fooled. The service is an inconsistent mess and more trouble than it’s worth. iCloud is the backbone of a number of Apple services, some more problematic than others. At a surface level, iCloud just handles all of your iPhone backups and syncs files between apps. My main problems have come from three different parts of the iCloud service: iCloud Photo Library, iCloud Drive and iCloud backups. Let’s start with the problems in iCloud Photo Library, which is arguably one of the worst photo backup services on the web today. 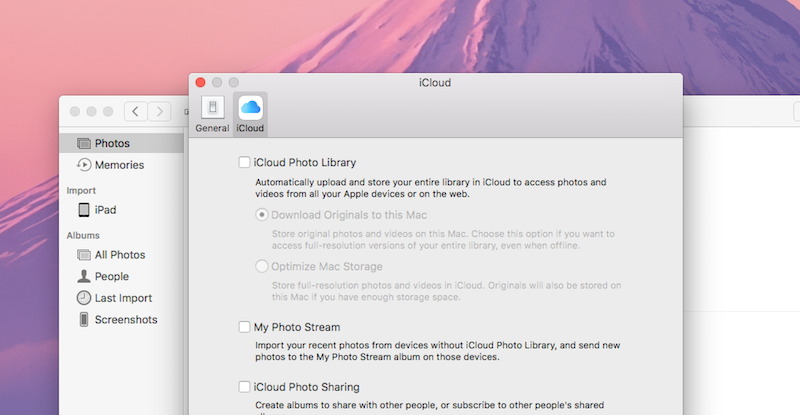 iCloud Photo Library is supposed to automatically sync every photo you take on your phone with your Mac and iPad. In reverse it will also sync every photo you upload to your Mac to the Photos app on your phone. This way, you can access all your photos from anywhere, provided anywhere means an Apple product. Your iCloud Photo Library will always include full resolution versions of your photos, but your device might store low resolution versions if it’s low on storage space. This all sounds pretty great! Too bad it struggles to actually work.

Because of the nature of iCloud Photo Library, everything happens under the hood and everything is restricted to Apple products. This alone should be enough to trigger warning alarms for potential users, especially when you consider how often Apple likes to change file systems and apps, but let’s talk a little about how poorly iCloud Photo Library actually works.

If you’re syncing data between your iPhone and your Mac, iCloud Photo Library relies on the Photos app on both ends. Most photo organisation apps store your photos in an easy to access set of folders, but the Photos app, like iPhoto before it, stores all your photos inside a container that is not immediately accessible from the Finder in macOS. It also uses a cryptic naming scheme that’s impossible to make sense of, so even if you do bother to get to the actual folders filled with images, they’re completely unorganised. Because of this, if you want to get an image out of Photos, you have to use the Photos app itself to export it. This locks you into Apple’s ecosystem and makes it very hard to leave, or even try to use other photo editing and management apps. You can use the iCloud web app to export photos, but it’s a cumbersome process.

This is even problematic within Apple products. Apple killed iPhoto and replaced it with Photos, but didn’t launch Photos with as many features. This means a ton of users lost data, especially those who meticulously went through and created albums, added tags or used the facial recognition feature. All this stuff was supposed to import over, but as with everything related to iCloud, it didn’t always seem to work quite right.

Take a look at this question written into Macworld, which asks what should be an easy question to answer: “If I turn off iCloud Photo Library on my Mac, will those files still live locally on my hard drive?” The answer, it turns out, is that they should, but make sure you’re not using the optimise storage option first. It’s confusing for the average user to suss out how the service works, and that’s a problem. People just want their photos backed up.

Plus, if you’re just using iCloud for nothing but photo storage, it’s overpriced when you consider Google and Flickr both offer unlimited or near-unlimited storage space for photos for free. Dropbox is still likely the best organisational tool for anyone who wants total control over their photos. All of these options are cross-platform, accessible from anywhere and use standard file naming schemes, which means you can easily take your data to another service when you decide to leave.

iCloud Drive’s “Features” Make It Hard to Use and Understand

iCloud Drive, which is ostensibly Apple’s more traditional approach to a syncing file storage service, is a little less baffling than iCloud Photo Library. It’s still, however, a far cry from usable. iCloud Drive uses a traditional folder structure, which means you can access files that you store on the backup service from the Finder or an app on iOS. Regardless, it has a ruleset that feels unpredictable, and Apple’s attempts to make it “hidden” and “just work” make it more complex.

From your Mac, iCloud Drive automatically stores files you create in apps like Preview, TextEdit, Pages and pretty much any other Apple app. These files are synced between Macs automatically, with no say from you, and they’re saved in app-specific folders on iCloud Drive.

In Sierra, there’s also the option to sync your Desktop and Documents folders between Macs. This makes it a little easier to share documents between computers. If you’re like me and you store files temporarily on your desktop while you’re working, this eats up space in iCloud extremely fast. If you’re not paying for an iCloud storage plan, turning the Desktop and Documents feature on will likely fill up your storage quickly, which in turn gives Apple a chance to pester you about how your iCloud storage space is running low and you should buy more.

Plus, like iCloud Photo Library, Apple doesn’t make it clear what happens when you turn off Desktop and Documents sync. That’s probably because what happens is pretty annoying: When you turn off the Documents and Desktop sync, it deletes all the local files in those folders. You have to go and download them again from the iCloud web app if you want them back. This, for example, makes absolutely no sense.

Then there’s the new Optimised Storage option in Sierra. This pulls files off your Mac and stores them only in iCloud Drive when you’re running low on storage on your Mac. It’s useful in theory if you don’t have a lot of free storage on your Mac, but as this support note points out, even Apple doesn’t recommend turning it on if you use their Pro apps, like Logic Pro or Final Cut Pro, because the unpredictable nature of Optimised Storage means you might be without key files. If you always have an internet connection, this isn’t a big deal because those files will live in iCloud still, but if not, it cuts you off. We do not recommend that anyone uses Optimised Storage unless you absolutely have to.

Even iCloud’s Backups Have Quirks 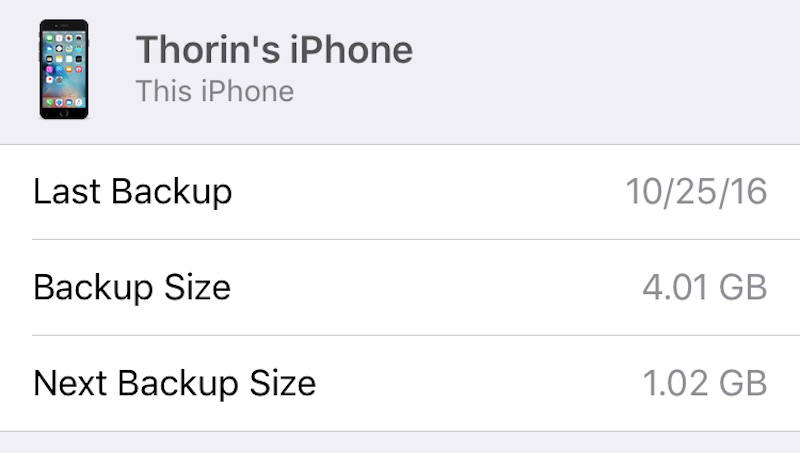 At best, iCloud is good for device backups. Without doing anything, you can seamlessly swap between an iPhone or iPad, or replace an old iPhone with a new one. iCloud’s backups stores your contacts, your list of installed apps and their settings, and your general iOS settings. It’s a solid service for device backups, but like everything else in iCloud, it does weird things for no apparent reason.

Personally, I consistently have issues with my own iPhone backup. For no reason whatsoever, the backup size seems to hover between 3-4GB, while the next backup size is always around 1GB. I have tried to understand what’s happening here for years and haven’t figured it out. I’ve turned off backups for certain apps, I don’t use the iCloud Photo Library and there’s nothing that should make my backups bloat out to 4GB. Regardless, I get a warning to buy more iCloud storage once a week or so. When I do, I have to go in and delete my iCloud backup, then back it up again at the smaller size. It’s frustrating. Again, because Apple hides so much from the user, it’s difficult to troubleshoot because from my point of view, everything should be working as I’d expect, with my backup being around 1GB.

You can’t completely untangle yourself from iCloud if you’re an iPhone or Mac user. A number of apps sync data using iCloud, including all of Apple’s own options, like Notes and Reminders. This stuff is mostly fine, with slow syncing or the occasional outage the only real problem. Even if everything is working as intended, there’s no denying that it’s a hassle to take your data with you if you ever leave Apple’s ecosystem.