How To Survive A Rattlesnake Attack

Australia has a reputation for snakes, but don’t think that you’ll be safe on your great American holiday. Out of the over 100 types of snake in the US, the deadly rattlesnake is one of the only ones that gives you a warning before it sinks its venom-injecting fangs into you. Still, plenty of people manage to get bitten by them every year. Here’s what you should do if hear that rattling sound, and how to survive if you get bit. Illustration by Sam Woolley. Photo by tableatny. 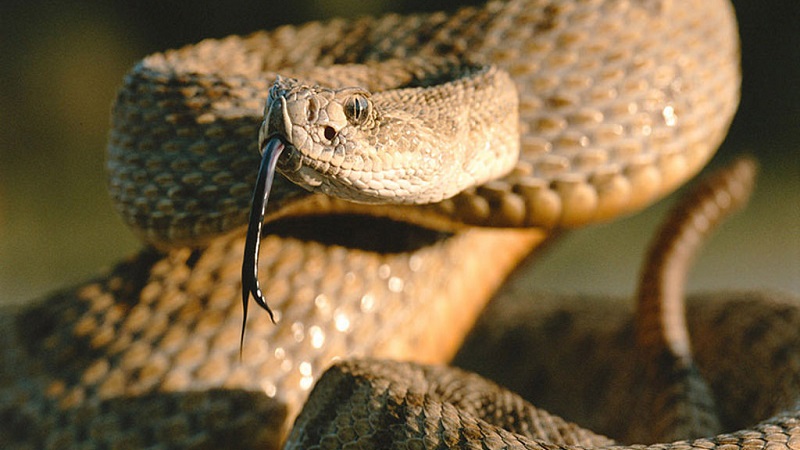 Rattlesnakes, and most snakes in general, are not aggressive and won’t chase you. They only strike when they’re threatened, handled incorrectly or accidentally touched by someone who can’t see them while walking or climbing. Still, there are about 8000 venomous snake bites every year in the US, with an average of 10 to 15 deaths, so it’s good to know how to avoid them. Here’s what the US Department of Agriculture recommends – which is good advice for avoiding snake bites in general:

A loud rattling sound is a sure sign you’ve angered a rattlesnake. But as the California Department of Fish and Wildlife explains, the distinctive “rattle” of the rattlesnake won’t always be present. They are sometimes broken off and lost, or they may not have developed properly when the snake was young. Other snakes, like the non-venomous gopher snake, will even mimic rattlesnakes by flattening their head and vibrating their tails.

You’ll know for certain that you’re dealing with a rattlesnake when it has a triangular-shaped head, a thin “neck” region, and a body that gets broader toward the tail. There will also be visible openings — used as heat sensors — between the nostrils and eyes, but hopefully you’re never close enough to see those.

If you hear the warning rattle of a rattlesnake, slowly move away from the area of the sound and do not make any sudden moves. Again, most snake bites happen when people are messing with the animals. And even if you think a snake is dead or that you killed it, stay away from it. Freshly killed snakes can still bite and inject venom.

If you’re bitten, try to stay calm to keep your heart rate low and call emergency services. Not all bites will inject venom — about 25 per cent are “dry” bites — but it’s better to be safe than sorry. According to the US National Library of Medicine, you’ll know whether venom was injected almost immediately. You might experience difficulty breathing, blurred vision, eyelid drooping, nausea and vomiting, numbness, weakness, extreme thirst and even paralysis.

Do not make incisions over the bite wound to “let the poison out”, apply a tourniquet to keep the poison from spreading, apply ice or cold items to the bite area or try to suck the poison out with your mouth — it’s no better there than it is in your bloodstream. In fact, most complications and limb amputations occur due to people icing or using tourniquets. Also, don’t take or use any medications unless specifically instructed by a doctor, and don’t ingest anything, especially caffeine or alcohol.

The bite will be extremely painful, but you’ll have to fight through it. Fortunately, if you can get to a doctor within a couple of hours (don’t dilly dally), and their facilities are properly equipped, they can treat you with a highly effective antivenom and you’ll be ok.

Until then, keep the bite below your heart, stop moving the bitten area as much as possible to reduce blood flow (a makeshift splint can help,) and remove any watches, rings or other items that might constrict once you begin to swell (you will swell if venom was injected). When you can, wash the bite wound with soap and water as you make your way to the nearest medical facility.