Why You Probably Shouldn’t Pick Your Nose 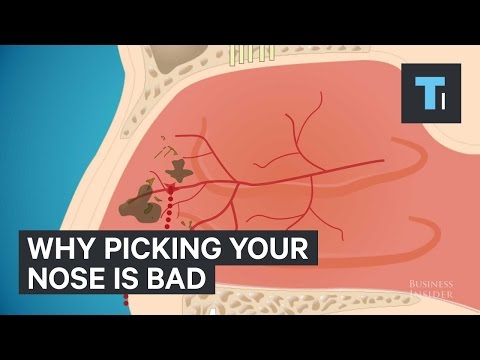 Picking your nose probably won’t kill you, but it’s not exactly a healthy habit either. Not only does picking your nose look gross, it could be leaving the door open for dangerous bacteria that want to call your nose home.

In this video from the Tech Insider YouTube channel, Dr Erich Voigt, an otolaryngologist at New York University, explains what happens inside your nose when you pick it. As you mine for nose gold, your fingernails cause tiny abrasions in your nasal cavity. Those abrasions bleed, and your blood becomes food for all of the germs that live in there. Germs like Staphylococcus aureus, a common cause of skin infections like abscesses, respiratory infections such as sinusitis and food poisoning. In fact, one study from Cambridge University, and published in Infection Control and Hospital Epidemiology, suggests that nose pickers are significantly more likely to carry Staphylococcus aureus.

Of course, a lot of people pick their nose and they’re fine. One study, published in the Journal of Clinical Psychiatry, even found that 90 per cent of those surveyed admitted to doing it regularly. Nose picking is rarely the cause of any serious problems in healthy individuals, but it could be trouble for those with weaker immune systems. Also, having fewer nasty germs like Staph in your body is usually a good thing — even for healthy people. So if you’re a picker, it’s not the end of the world. But you may want to consider blowing your nose next time instead, or at least grabbing a tissue before you go digging.