How I Found The Perfect Running Shoes

I Took a Wild Guess, Like Any Beginner Would

I was young and stupid, but I had read a few articles on Runner’s World so I knew there was such a thing as a “Real Running Shoe” and that I shouldn’t run in just any old sneakers. The only problem was that I didn’t know how to find the right one. So like most beginners, I went to the biggest store I could think of — in my case, a Nike outlet — and tried on everything in the running section. I had no idea which shoes were “best”, but they were on sale so I went home with two different pairs.

One, the Nike Presto, was flimsy and soft, with a sock-like upper. I liked that it was comfy and lightweight. The other, I barely remember. It was more of a traditional running shoe, and it was blue.

When I ran in the blue ones, my feet would hurt about 1.5km into the run — a sharp pain in my arches. To this day, I have no idea what this pain was, or why I still get it sometimes in certain shoes. I had no such problems with the Presto, so I kept running in those. That is, until I decided to train for a marathon. Within a few weeks, I developed a different ache in my feet. In hindsight, I know that it was just a mild tendinitis that would have resolved itself with rest. But at the time, I had no idea. I also had no health insurance, so I didn’t get it checked out.

Instead, I posted on a runners’ forum. I mentioned my training goals, my mileage and my shoes. I pretty much got laughed off the internet. You’re running in what? people said. Go to a real running store and get some real shoes.

I Did My Research, but It Wasn’t Enough

This all happened nearly 15 years ago, and in the meantime research has shown that if a pair of shoes feels good when you run, it’s probably the right pair for you. But at the time, it was considered common knowledge that there was a science to picking shoes, and it started with figuring out which “foot type” you have.

So I read up on all the things we now know are pretty much bogus, like checking out the shape of your wet footprint and looking at the height of your arches. Thus informed, I located a real running store, the kind where all they sell is running shoes and running gear and running clothes, and it all seemed super expensive. (Fleet Feet is a chain in the US, but lots are independent.) These stores are staffed by experienced runners, and they know feet and they know running, and they tend to have a great selection of shoes.

I walked in, expecting some sort of in-depth technical assessment of my gait and foot shape and type. Instead, the salesperson asked how much I run and what I was training for, and he handed me a shoe and asked how it felt. Fine, I answered. He said it was a good shoe. I didn’t know what else to do, so I bought it.

I was disappointed in the service, but since then I’ve visited running stores with better results. After all, they’re businesses that see a lot of similar customers, and sometimes they’re busy. And if you’re trying to solve a problem caused by injury, going to a shoe store is not the same thing as going to a doctor.

I took the pair home, and discovered later that they had the same problem as the blue shoes: They hurt my feet after 1.5km. I didn’t know that I probably could have returned them. I didn’t see any point in going back to the store. Instead, I gave up running.

I Tried a Trend, with Mixed Results Years later, I tried again, doing my own research and buying shoes online. This time I picked a motion control shoe. It only hurt sometimes, so I ran in it for a while. But I was frustrated that I couldn’t keep up a sport I liked because of something as silly as my choice of shoes.

I’d met a few weirdos who were into barefoot running, but wasn’t ready to shed my shoes. Then I learned about Vibram Five Fingers, more popularly known as “those ugly toe shoes“.

I ordered a pair, and started re-training myself to run on my toes instead of hitting the ground heel-first. (Without any cushion on the heel, that’s the recommended way to run in these.) They were a smashing success. My feet loved these non-shoes.

Well, except for one thing. The thin sole was great, the flexibility was awesome, but I’m blessed with long toes that felt kind of cramped in the Vibrams’ short little toe pockets. By now, I had figured out what I needed: A shoe that was flexible throughout the sole, but didn’t crunch my toes.

Experimenting pays off, because it helps you figure out what works and what doesn’t. It also helps if you don’t get too attached to the subject of your experiments. While I was wearing the toe shoes, I talked up their awesomeness to everyone I met. But in the end, they weren’t the right shoes for me. Instead, they pushed me further along my path toward finding the right shoes.

I Listened to My Body, and You Should Too 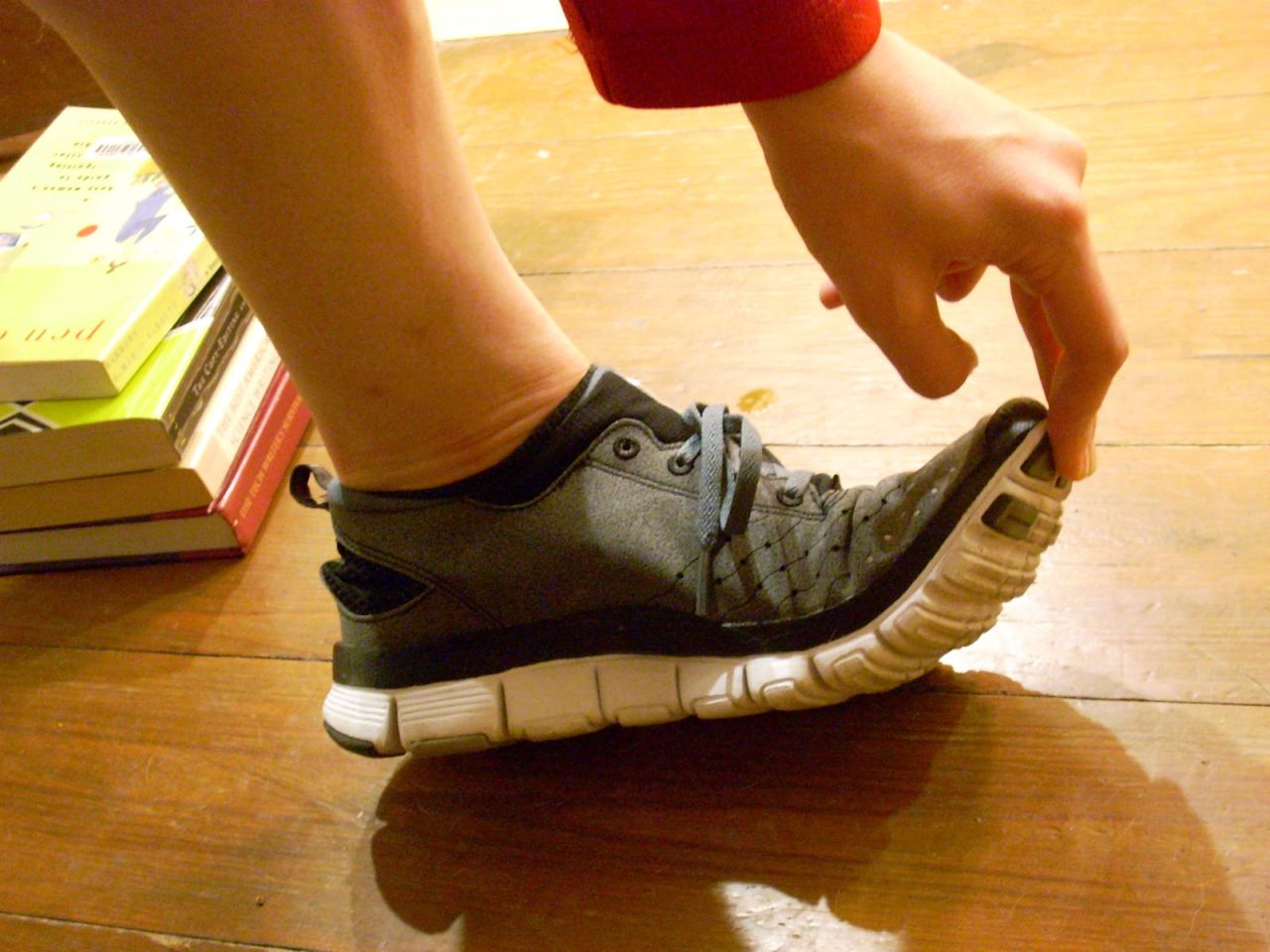 Timing was finally on my side. Nike began making a shoe called the Free that was supposed to mimic barefoot running. Minimalist running was beginning to be a big thing, and to some, the Free was a misguided attempt to cash in. On the same forums where people had told me my shoes were too flimsy, folks were now laughing about how the Free was way too cushioned and structured to really count as minimalist.

Then I realised something. In terms of fit, support and flexibility, these shoes were almost identical to the Prestos that I used to run in, before I initially stopped.

Some people hate the way Nike shoes fit, but they’re perfect for my feet. Every shoe company shapes its products with a different foot shape in mind, or in shoemaker’s terms, a different last. Nike’s shoes are usually made on a narrow last, which matches my narrow feet. You may need to try different brands to figure out what works for you, but when you find it, pay more attention to the feel than to what people say about it.

I Stuck With What Worked, and the Rest Is History 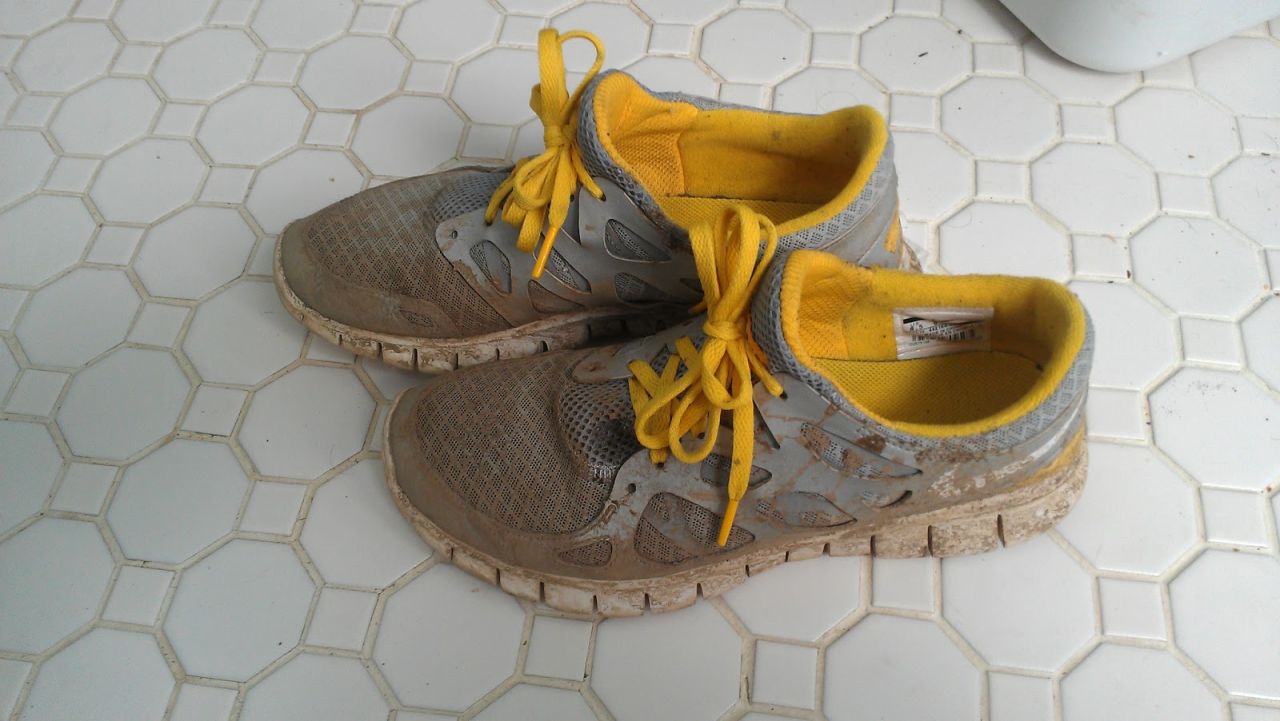 I kept running in that same pair of Nike Frees for years. You’re supposed to replace your shoes every 500 to 800km, but I wasn’t willing to chance it. I began training for a marathon, and about halfway through the training, my coach handed down a commandment: We were to all buy a new pair of shoes, and break them in, about two months before the marathon. But we were not permitted to mess with success. “Whatever you have,” he said, “buy that exact same shoe.”

So I bought a new pair of Nike Frees, with one tweak: I’d been wearing an eight, but I bought a nine. The extra toe room meant I didn’t develop any more blisters or black toenails. I ran my marathon in these shoes. That’s them, above, after 322km or so.

When you find shoes that can keep your feet happy for hundreds of kilometres, stick with them. I don’t try on shoes anymore, or ask running store employees or anyone else for advice. I just order more pairs of the exact same thing. Nike has redesigned the shoe a few times over the years, but it still works for me. I won’t switch unless I have to, like if they discontinue the shoe or do something drastic in a redesign. And if it comes to that, I now know what I look for in a running shoe: Mainly flexibility, and a narrow last. That gives me a good starting point for my search. Your personal requirements might be different, but when you find a shoe that fits them, stick with it.

I bought a second pair in water-resistant fabric, for running in light rain and snow. I found another pair on clearance one day, so I bought them and stuck them in my closet for later. I went on holiday, and forgot my shoes, so I bought yet another pair of the exact same model. It’s been years, and I’ve run through and retired five pairs. I’m on my sixth.

I asked a bunch of running friends and acquaintances how they settled on their current shoes. “I got them for free,” said one friend who does social media promotion for the Credit Union Cherry Blossom race, and is paid partly in shoes. She thinks it’s weird that there are shoes I can’t run in.

Several others went to a running store, asked for a recommendation and have been running in the same shoes ever since. A few followed a path like mine, trying minimalist shoes after more structured ones failed them. One trail runner asked an orthotist for a recommendation after she tore a tendon, and ended up in a super-structured shoe, with orthotics, that works for her. Another runner went to a running store and got a detailed evaluation of her gait and foot type, then tried on a pile of shoes. She confessed that she said they all “didn’t fit” until the salesperson brought out a model she didn’t think was ugly.

My advice to new runners is to stick with the shoes you’ve got if you’re happy with them. Don’t let anyone tell you they’re too flimsy or too structured or too trendy or too old-fashioned. If they work, they work. And if you haven’t found that perfect pair yet, go ahead and start experimenting. I still recommend specialty running stores, partly because you might find a great employee who gives you great advice, and partly for the fact that they usually let you return shoes that don’t work out, even if you’ve run outside in them. (Be sure to ask about their policy.) Sometimes you have to try a lot of duds before you find the perfect shoe.

There are many paths to the perfect running shoe, and what works for someone else might not work for you. If I had my shoe journey to do all over again, I would have trusted my gut and stuck with the Presto: It had all the qualities that I now know I need in a shoe. I just had to experiment with other things to learn that the hard way. But now that I have a new favourite shoe, I’m sticking with it.